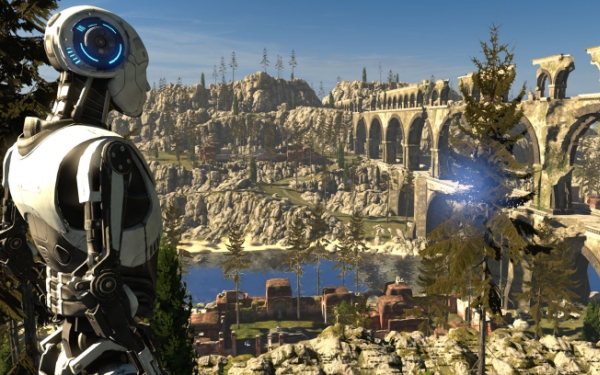 Developer Croteam created “The Talos Principle” for the PC gaming audience, but now that same game is a launch title on the Nvidia Shield Console. The new Android TV console offers plug-and-play access to Android and GRID games. Croteam sees a future in which it develops games simultaneously for PC, consoles and Android with day-and-date launches becoming the norm.

Alen Ladavac, CTO of Croteam, explains how the Nvidia Shield could be as game-changing to the industry as “The Talos Principle” has been to the puzzle genre in this exclusive interview.

Q: What were your goals heading into this game?

A: Actually, we initially started creating a completely different game — “Serious Sam 4” — a sequel to the renowned franchise of over-the-top first person shooters. In the process, we were working on some puzzle mechanics we wanted to use to replace the old “find a key to open the door” approach. However, those turned out to be so much fun that we just had to make an entirely new game out of them. And in this one, there would be no shooting, only puzzles. That’s how “The Talos Principle” was conceived.

Q: What’s the storyline in this game world?

A: Discovering the story as you play is a large part of the experience, so let’s just say that in the beginning, as if awakening from a deep sleep, you find yourself in a strange, contradictory world of ancient ruins and advanced technology. Tasked by your creator with solving a series of increasingly complex puzzles, you must decide whether to have faith or to ask the difficult questions: Who are you? What is your purpose? And what are you going to do about it?

Q: How do you feel you’re pushing things forward with this game?

A: It was a giant leap of faith for us, as a team that worked on linear action shooter games for years, to create an open world philosophical puzzler. But it worked out nicely and was critically acclaimed on the PC. The technological wonder is that, thanks to the latest K1 and X1 chips from Nvidia, we were able to make the game work on Android without sacrificing its visual glory.

One of the things we are also proud of is we were able to create a novel and very intuitive set of touch-screen controls, so tablet users can play the game comfortably, instead of having to fiddle around with virtual thumb sticks. It’s a new paradigm that anyone who’s used to browsing the Web and reading email on a touch-screen device can easily pick up and play. You don’t need to be a first-person hard-core player to understand it. Of course, we give the player the option to use a game controller, if desired, but if you are on the go, with only a tablet in your hand, you can still play just as comfortably using just the touch screen.

Q: Can you talk about the single player experience?

A: It’s a nonlinear, open world where the player is free to travel across the game’s vast and varied worlds, solving puzzles at your own pace and at the same time slowly unveiling the story. It’s a story that will not only keep you wanting to know more, but will also make you think about philosophical topics. As one of the writers likes to say: “It’s a game where you get to argue with the devil.”

Q: How have you worked with Nvidia on your game?

A: Nvidia has been very helpful in providing development hardware, special software tools that helped us port to the Shield platforms, as well as giving technical advice when it was need. We’ve always had great experience working with Nvidia’s engineers and we are glad that we had this opportunity to work with them on this title.

Q: What have they provided in terms of tech that has helped with development?

A: Besides the dev kit hardware, they also provided excellent software tools like the Tegra Android Development Pack, a set of extensions for Visual Studio that allowed us to very easily debug and profile the game using our usual development environment.

Q: What are your thoughts on the evolution of Android as a platform?

A: It is obvious that Android, and the mobile market, is on a crossroads today. Things that were thought impossible just a few years ago — full-blown modern games played on a tablet with all the visual glory of their PC counterparts — are now a reality. The Android platform is soon to become just as important as the PC not only for the casual audience, but also for the core gamers. More and more high-profile games will start releasing day one on Android together with PC, making it one of the potential core platforms. But not all devices will be able to handle it. Up until now, there was no distinction between “gaming” and “non-gaming” Android tablets and phones. One could say that none of the devices were “gaming devices” up until now. But with the introduction of K1 and X1 chips, the cut has become very clear. We had this distinction between gaming and non-gaming PCs a while ago, but now practically all the PCs are capable of gaming. I would expect that a similar path is to be followed by mobile devices.

Q: What excites you about Android TV?

A: It is a very different platform to target than mobile, and in a good way. Without the constraints of the battery and passive cooling that mobile devices have, Android TV devices can pull off a much better performance than their mobile counterparts. Top that with the fact that it is designed to be used with a TV screen and a controller, sitting on your living room couch — and it makes it much easier to release games that would normally be designed for PC or consoles only.

Q: What impact do you think Nvidia Shield could have within the gaming ecosystem?

A: Nvidia Shield is the first console-like Android device that delivers on the promise that you can have an affordable gaming device in your living room, playing games that you would otherwise play on your PC. There were notable attempts before, but none had managed to both provide the raw power needed and capture enough of the market. Without good games, there are no players on the platform, without enough players to buy the games, there’s no incentive to make games for the platform.

The Shield certainly has the power, and with Nvidia’s backing I expect it to soon command a number of the devices significant enough for the game developers to have to take note and ship games for it.

Q: What do you see Nvidia Shield opening up for game developers moving forward?

A: The hardware that is on par with the PC gives us the ability to ship titles day one with PC and consoles. That is a game changer, meaning that Android becomes a valid target platform for developers that were previously working on games for PC and/or console only, and if an Android version ever became available, it was a very delayed and often cut-down port. This is no longer necessary, and it looks like our future games will be released for this platform together with the PC version.