The Entourage entourage reunites on the big screen 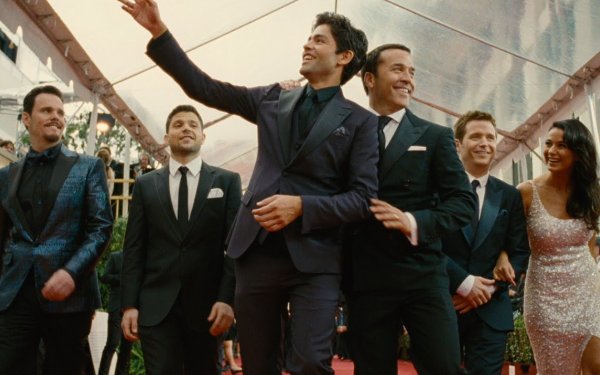 Movie star Vincent Chase (Adrian Grenier), together with his boys Eric (Kevin Connelly), Turtle (Jerry Ferrara), and Johnny (Kevin Dillon), are back - and back in business with super agent-turned-studio head Ari Gold (Jeremy Piven) on a risky project that will serve as Vince's directorial debut.

Along with all of the returning series regulars, the movie features dozens of celebrity cameos, including hilarious turns by Mark Wahlberg and Liam Neeson. Billy Bob Thornton joins the cast, along with Haley Joel Osment in a performance that might make you forget about the kid from The Sixth Sense. Entourage creator Doug Ellin directed the film from his own screenplay and the movie picks up six days later from where the series ended.

You guys have been together for 15 years. How has the essence of your characters changed?

Kevin Dillon: My character has changed the least amount and is still striving for the same thing which is fame. Not really fortune so much, he's really about the fame. That's what I love about him; I don't want him to change too much.

Adrian Grenier: One thing about this crew that's so special is despite all the changes and all the ups and downs, there is still something that remains steadfast which is their loyalty to each other. Vince has certainly inspired a generosity amongst them.

Jerry Ferrara: I think Turtle is the last to start the evolution process, but I like to go back to the early, early years of the character where he was telling girls to make out with him and show them where Vince eats breakfast in the morning, to dating Jaime Lynn who was out of his league to basically being a millionaire. I used to joke around with Doug [Ellin] all the time asking, ‘when is Turtle going to grow up a little more?’ This was in season 2 and he said, ‘in season 8.’ So when we got to season 8, I told Doug that it was time. But I love the evolution of this guy and I've matured a little bit as he has too.

Kevin Connolly: I think all the characters have evolved. When you look at Season 1 compared to season 8, I think Drama has become a bit more evolved too. Of course E and Sloan are taking a big jump in this one and adding a tiny member to the entourage.

Doug Ellin: Even close friends can change with the passing years. To help with that, Piers Morgan plays himself in the opening scenes. He does an interview with the entourage of Vince, Eric, Johnny Drama and Turtle that serves as a way of introducing the players to anyone who might not have seen one of the 96 episodes that ran on HBO starting in 2004. It’s also a refresher for those who were fans but need an update.

Kevin, did you ever have a bad audition that you kind of brought to Drama?

Kevin Dillon: I've had many bad auditions. I smoked cigarettes back then and I was five flights up. So I ran down stairs to smoke. Then they said they were calling me, so I ran to the top of the steps and I went in there huffing and puffing and I was sweating. It just looked like I was a nervous wreck. It was awful.

Kevin Connolly: Also, if Drama had an imdb page, it would be pretty impressive. The guy has done a shit ton of work [laughs].

Was there ever a fear that people not in the entertainment industry would not get the little stuff in the film?

Jerry Ferrara: I used to wonder if some of the jokes and lines would get lost to people who didn't live in LA, but you'd be surprised how many people are obsessed with the inner working of the business. You would just wonder if they're getting it.

Adrian Grenier: It's also a testament to how layered the show is, even if you don't get the jokes, you can still enjoy it.

Kevin Dillon: I remember telling Doug that I wasn't sure if anyone was going to get this outside of Hollywood and he didn't care and said the audience will figure it out.

Kevin Connolly: We've made the traffic worse in LA. We're responsible to tons of people moving out to LA because of the show and I tell them, "Are you carpooling?" Lots of people have looked at us as a group and said if these guys can do it so can they.

Obviously you guys took a big break from shooting the show to filming the movie. How long did it take to get back into it?

Doug Ellin: The process of making the movie was like getting back together with your friends from high school.

Kevin Connolly: It was pretty quick.

Kevin Dillon: After the first take it felt like the second one was better. We started the walk and talk, which is one of the hardest things you have to do. There's about one take and there is no cut in there.

Kevin Connolly: It didn't take very long. We started shooting the movie a year and a half ago, so it's been four years but for us it's been three years. It really wasn't much more than an extended hiatus.

There were so many cameos in this film. How did the process work and did have a wish list?

Jerry Ferrara: I'm not sure if Doug ever got enough credit because it's not easy when Mike Tyson just shows up on set in six hours. Where it just doesn't look like, ‘here is Mike Tyson.’ I don't think he's gotten the proper credit in working these cameos in and it's part of the story and part of the world.

Kevin Dillon: Sometimes he will pan it off to the actor saying, ‘Hey Dillon, we have Jon Favreau coming in and you guys have to figure something out. Go to your trailers and figure it out.’

Kevin Connolly: When the show first started - especially the pilot - we couldn't get anybody to do it. We were sitting around asking each other who do we know and who can we call and who would do this? Nobody knew what the show was and people were a little bit confused. Our first [cameo] was Ali Larter. To get [someone to perform] a cameo in a pilot is a tricky thing.

What was it like to be back on set and acting again with Jeremy Piven especially after he spent three years in London on his TV Show?

Kevin Connolly: I think Jeremy would still have been just as good without his Mr. Selfridge. Nothing against his show, but Jeremy is just great no matter what he's doing. I don't think Mr. Selfridge gave him new acting tips [laughs].

Jerry how was it getting into the ring with [UFC fighting champion] Ronda Rousey, and did she take it easy with you?

Jerry Ferrara: First of all, it was very humbling because I know my friends would think that since she's a woman, they could handle her, but that is incorrect. She would dispose of all my friends and me very quickly. She's a professional fighter and she's great at what she does. It was just a treat for me to get in the octagon with an athlete that's at the top of their game and their prime. She definitely took it easy because there is a part where she kind of has to flip me and I did let the stunt man do it because she has broken ribs before. I wanted to do my own stuff but I told her, ‘you're the pro here, I'll listen to you.’ She does it every single day of her life. That's the easiest way to describe it. She fights!

Kevin Connolly: I just need to say that I think I could last, but there was always some discussion on set and rumors that I would be killed in five seconds.

With all these cameos involved, was there a lot of improv?

Adrian Grenier: Doug just killed it in the script and it's just a matter of us making it feel as natural as possible. In fact, he gets mad if we go off script sometimes because he's taken such great care making sure our lines are the best.

Doug Ellin: It’s incredible to see all the [celebrities who were willing to perform cameos]. We’ve been off the air for three years. It’s had a good feeling, but we’ll see. [Entourage] is about loyalty, friendship and brotherhood. These guys take care of each other; that’s what matters the most. All the fancy cars and beautiful women, which we see plenty of in the movie, they all come in second.

Entourage is in theaters now.