Preaching to the Choir 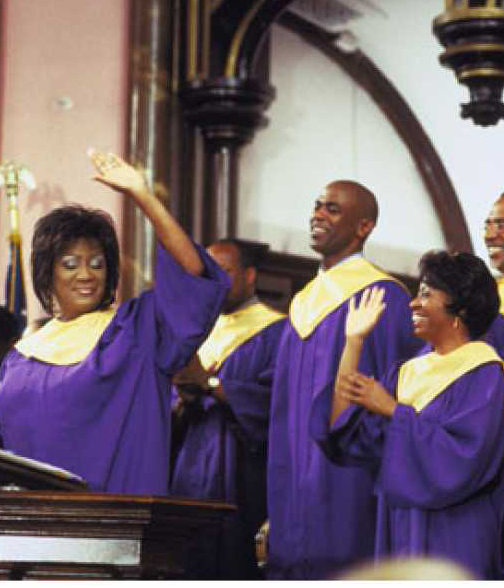 Preaching to the Choir seeds adequately in the very fertile genre of black films about redemption. But don’t expect performances on the level of last year’s Diary of a Mad Black Woman or The Preacher’s Wife (the 1996 all-black remake of The Bishop’s Wife).

Preaching pits twins Wesley, a minister, and Teshawn, a popular rapper, against each other on the basis of a misunderstood family secret. The rebellious Teshawn, played capably by Billoah Greene, believes only he holds the truth about their parents’ untimely deaths when he and his brother were young boys. The Reverend, Wesley, played less convincingly by Darien Sills-Evans, tries to atone for the sins of the father. The orphans move to New York to live with Aunt June, stiffly played by Novella Nelson, but grow up and separate.

Teshawn later becomes rap star Zulu and returns to his brother’s Harlem church to hide from California gangster henchmen. All you-know-what breaks out in the fledgling congregation. Predictably, the church choir becomes the instrument of peace.

The premise – an atypical convergence of gospel and hip-hop cultures – gives the film some fresh play, as does its big names, though they come mostly in the form of cameos. Patti LaBelle, Tim Reid and Eartha Kitt contribute less than 15 minutes combined.

Reid’s 10-second, out-of-nowhere street prophet wins the prize for “Most Bizarre,” while Kitt gives the best hoot as Miss Nettie, the irreverent choir maven, who convincingly utters the line: “Wouldn’t that be dope my gangsta homie?”

Beyond the lead roles, the film turns out mostly a supporting cast of caricatures, especially the henchman part played by “Lost” star Adewale Akinnuoye-Agbaje.

Still, the limited amount of gospel music is outstanding while it lasts. For example, an unexpectedly rich scene develops when Zulu walks to Sunday service with Aunt June and on the sidewalks along the way a diversity assembly of gospel music choirs literally pops out on the scene.

It was the rare but too brief heavenly touch. Grade: C-