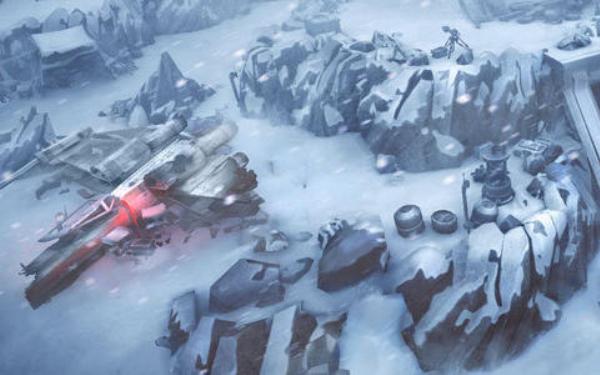 The heavily social game will pit players -- all the players -- together in a battle against the Empire. The bad guys here will be entirely controlled by the game.

Events in the game will help fill in some of the details in the "Star Wars" universe prior to the launch of the new trilogy, the first film of which will open in December and be directed by J.J. Abrams.

"This is a fairly uncovered time frame within canon," says Aaron Loeb, a senior executive with Kabam. "What happened right after the Emperor died? How did the news reach the people? What happened to the rebellion? This is a really fertile and interesting time period to be playing in."

Adds Loeb, "It's the first time there's been a game set in that time period on mobile."

A role-playing game developed by San Francisco's Kabam RPG Studio, the company behind the well-received "Spirit Lords," "Star Wars: Uprising" will be free to play. Those willing to invest the time, says Loeb, will be able to play the full game without spending a dime, but players will have the opportunity to buy gear, crew members and numerous other customizable options.

Upon boot-up, Loeb says, the game is designed to get users playing almost instantly. At the start of the game, players will inhabit the role of a smuggler being targeted by Imperial forces.

"They capture you smuggling something that's extremely illegal," Loeb says. "So you start on the run, and right away we teach you fighting and how to get away from Imperial troops. You'll fight your way through some caves and use explosives to make sure you can't get followed by the Imperial forces. It starts with action.

"Within a few missions," Loeb continues, "you are running new smuggling and recovery missions for a local crime boss. From there you're collecting your crew and starting to understand what's going on in the sector."

As the game progresses, and further delves into an uprising against the Empire in the Anoat Sector, players will be able to increasingly mold characters to their liking.

"A huge amount of what you're doing is collecting the gears and abilities for the kind of 'Star Wars' hero you want to be, whether you want to be a diplomat or a bounty hunter or a gambler or a raconteur," Loeb says.

The game is designed to constantly evolve. There will be staged events that will attempt to galvanize players -- so-called "sector battles" -- allowing downloaders to engage in real-time battles against the Empire with friends.

"Star Wars: Uprising" is targeted for a fall release and was developed in close collaboration with the Walt Disney Co. and Lucasfilm. Those working on the game include Daniel Erickson, a former creative director on "Star Wars: The Old Republic," and Danny Keller, an animation supervisor on "Star Wars: The Clone Wars."

"You can rest assured that Lucasfilm is very aware of everything that is in this game," Loeb says. "It is very much a part of the universe that is being built between the end of ‘Jedi’ and the new movies."

Star Wars Celebration: Mark Hamill talks of being ‘drafted’ for ‘The Force Awakens’

Games & Gadgets
Gaming against sexual assault, with 'Decisions That Matter' and other video games
1,252 views