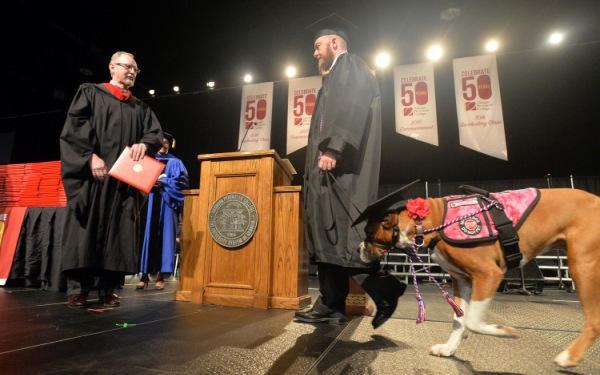 ATLANTA — Most people meet Wesley McReavy’s service dog, Kiah, before they meet him. And McReavy is fine with that.

A few years ago, McReavy was diagnosed with post-traumatic stress disorder. Years in the military — including his last deployment to Iraq — had taken their toll, leaving the Marine and Army veteran with anxiety and uneasy feelings of being overwhelmed. Before Kiah and after a medical discharge in 2011, McReavy, 36, was content to spend most of his time at home, venturing out only when absolutely necessary.

His condition could have been a barrier to a college degree, but this year he earned one from Georgia Perimeter College. Working closely with the school’s military and disability services teams, McReavy was able to complete his psychology studies with help from Kiah, who provides body blocks between strangers and her owner, cutting the hypersensitivity that can still make McReavy uneasy in some situations.

That accommodation is one example of steps Georgia’s colleges and universities take to educate and graduate a significant part of the state’s population: veterans and their families, whose lives after the time in uniform can be difficult.

Nationally, the number of veterans who are homeless nightly is about 50,000, and the unemployment rate for post-9/11 veterans was 6.9 percent in April, higher than the 5.4 percent national average.

Georgia is home to about 774,000 veterans and has the nation’s fifth-largest active-duty military population. About 9 percent of the state’s population is either serving or has served in the armed forces.

Last month, McReavy was among more than 800 veterans to graduate from institutions in Georgia’s public college and university system. More than 960 military-affiliated students — either active-duty, reservists or veterans and their dependents and spouses — graduated this spring from the state’s technical college system. Final graduation numbers are still being calculated, but based on last year’s numbers, about 2.8 percent and 3.5 percent of University System and tech college system graduates had some military affiliation.

Georgia has been one of the most aggressive states at helping service members and their families. A returning veterans task force was started two years ago to better coordinate services offered by various state agencies, and a service and education center is planned for Warner Robins to help veterans and their families transition to civilian careers. Georgia was the second state in the country to offer in-state tuition to recent military veterans, their spouses and dependents receiving GI Bill funding, regardless of their residency; way ahead of an Obama administration requirement for all public colleges to do so.

Within the past two years, the state’s university and technical college systems have also hired administrators — veterans themselves — for outreach efforts including training campus faculty and staff on dealing with military students and coordinating with area military bases.

Beyond academic and logistical challenges, veterans used to the discipline of the military are sometimes not used to the “unstructured environments of college,” said Patricia Ross, a retired colonel leading military affairs for Georgia’s technical college system.

“That’s one of our biggest complaints,” said Lacey Allen, 25, an Army veteran attending the University of North Georgia in Gainesville. Typical college experiences, such as instructors straying from their syllabus for impromptu assignments or discussions, can be disconcerting. “The structure we came from, appreciation of time and how much we value it. … It’s very stressful when things ‘just happen.’ For us, that’s not OK.”

Schools like UNG have started student veteran organizations so Allen and her veteran colleagues can support each other through college’s ups and downs. For Allen, just getting to college was a feat. While on a training march with her unit carrying 30 pounds of gear, Allen fell, fracturing both her hips. She had recently been cleared to return to duty after giving birth to her son for what she thought would be a full military career. Instead, Allen received a medical retirement from the military at age 23.

These days Allen suffers from chronic bursitis in both hips and uses a cane to get around the North Georgia campus. She’s working toward a psychology degree, and plans to attend dental school after receiving her undergraduate degree as early as next fall.

That kind of perseverance makes veterans the perfect employees for Larry Ellis’ company, VetConnexx. Almost all employees of the customer service, call-center company in Atlanta are veterans. State education officials are working with companies like Ellis’ to provide training for workers and jobs for veterans now in college. “Our goals are to try to improve veteran unemployment,” said Ellis, a veteran and member of the state’s board of regents. The partnerships also lead to a more educated Georgia and keep college enrollment figures up, he said.

“There is a real value in going back to school,” McReavy, the veteran and Georgia Perimeter graduate, said. “It really is possible and something I initially never thought I would do. I would tell others, just take it one semester at a time.”

McReavy is already on to his next challenge. He is enrolled at Georgia State University and working toward a bachelor’s degree. And Kiah’s still right by his side.

Campus News
What’s the risk of COVID-19 for a healthy young person?
671 views