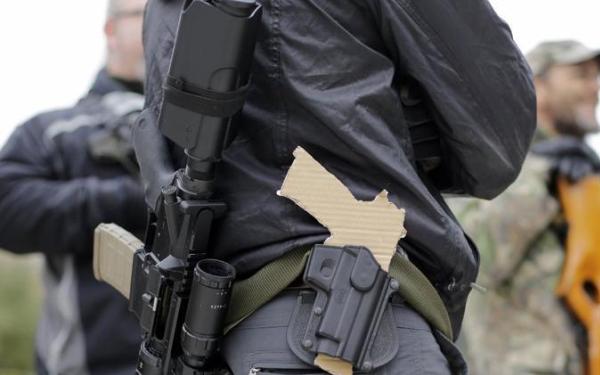 A gun rights advocate carries a rifle on his back and a cardboard cutout of a pistol on his waist outside the Texas Capitol.
(Credit: Associated Press)

Just days after the Texas Senate voted to legalize concealed guns on college campuses, university officials and opponents of the bill are already thinking of ways to limit its reach.

Although some university faculty members and students fought the bill that passed on Sunday, many seem to have embraced amendments that allow schools to place some areas on campuses off-limits to concealed weapons.

“While it is not what we had hoped for, I respect the Legislature’s decision,” University of Texas Chancellor William H. McRaven said in a statement.

Senate Bill 11, which sailed through the Legislature by a 102-43 vote in the House and a 20-11 vote in the Senate, allows gun owners to carry firearms on campus in classrooms and dorms at state universities.

Anyone who wants to have a gun on campus must be properly licensed by the state, which requires gun owners to be at least 21 years old and pass a background check and shooting test.

Texas Gov. Greg Abbott has said he will sign the measure into law.

Critics charged that concealed weapons pose a number of safety concerns for universities, where mass shootings over the last decade have prompted institutions to install alert systems to warn students and staff members of danger. Proponents of the legislation say licensed gun holders will make campuses safer.

“Concealed handgun license holders are the safest, most responsible gun owners in Texas,” Sen. Donna Campbell, a Republican from central Texas, said in a statement. “It is irresponsible on our part to disarm the good guys where violent offenders disregard the law.”

Proponents of the legislation argued it would drive down crime rates and give civilians the power to stop a gunman on campus.

“So far as I know, these claims are based entirely on anecdotal evidence,” said William Spelman, a professor at the University of Texas at Austin’s Lyndon B. Johnson School of Public Affairs.

Spelman, who studies crime prevention and urban policy, said he had never seen an academic study on campus-carry laws and the role concealed weapons played, if any, in preventing violent crime at colleges.

He said that rather than driving down crime, concealed weapons would probably lead to accidents and higher rates of suicide at universities across the state. College students may want to look at a gun out of curiosity or show one off to friends — a dangerous move that could cause someone to accidentally get shot, Spelman said. Still, he said he thought his university is a safe campus, even with the new permissive gun legislation.

“Very few people at the University of Texas want to bring a gun to campus,” he said. The new law “is mostly of rhetorical value for lawmakers. It makes them feel good and it makes their constituents feel good. It’s not going to change much at UT.”

Some students spoke out against the campus-carry measure.

Ashley Alcantara, 20, a third-year student studying government at the University of Texas at Austin, said she lobbied with other members of the University Democrats club to try to prevent the bill from becoming law.

“We’re very concerned,” she said. “In the classroom there are times when conversations can get heated. It changes the learning environment when there is that risk.”

Still, Alcantara said she was hopeful that some of the leeway in the legislation would allow students to work with administrators to ensure that some areas of campus would remain free of handguns — such as child-care, health care and mental health facilities — along with places where alcohol is consumed, such as outside the football stadium where fans tailgate.

Administrators agree that the legislation gives universities freedom to determine when and where carrying a concealed weapon is and is not appropriate on campus.

“This summer, I will begin working with the UT Police Department, students, faculty, staff, student housing officials, the chancellor, and the Board of Regents to develop those protocols,” the university’s president designee, Gregory L. Fenves, said in a statement.

The law will go into effect for Texas state universities in August 2016, the same month that marks the 50th anniversary of one of the first mass shootings in U.S. history.

Charles Whitman, a former student at the University of Texas, Austin, climbed to the 28th floor of the university tower and began shooting at students below on Aug. 1, 1966. He killed 16 people and wounded 32 others before police shot and killed him.

Most other states allow individual campuses to determine whether students with proper licenses should be able to carry their guns at school, and 19 states ban concealed guns at colleges.