Box office in China is soaring to new highs 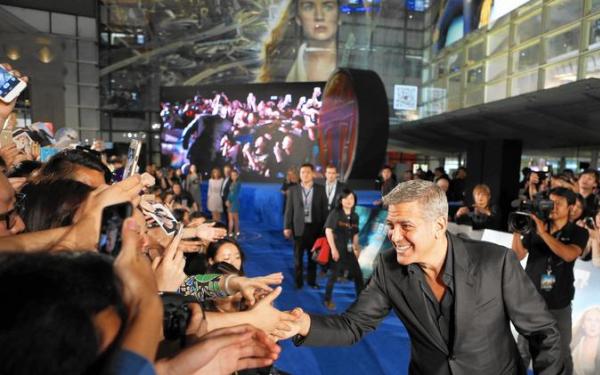 China's movie business, which is growing at breakneck speed, has hit another milestone: The box-office haul has jumped nearly 50% from a year earlier.

Chinese moviegoers spent $2.6 billion on tickets in the first five months of the year, according to film tracking firm Rentrak. This puts the country on pace to within a few years overtake the U.S. and Canada, which have racked up $4.3 billion in sales since January.

There's a confluence of reasons behind the expansion. China's rising middle class has led to a multiplex building spree. American movies are also growing more popular, highlighted by the more than $600-million draw for "Avengers: Age of Ultron" and "Furious 7."

Hollywood is paying attention. The growth has prompted a flurry of deal-making as studios and producers look to gain a foothold in the market.

"The strength of the market and dollars that are available in China are astounding," said Paul Dergarabedian, a senior analyst at Rentrak. "If you leave out China, you're going to leave a lot of money on the table."

That's never been more evident than with "Furious 7" and "Avengers," which could be a harbinger of bigger and bigger returns for Hollywood studios.

Universal's "Furious 7" pulled in $390.8 million through May after its April 12 debut, making it the highest grossing film ever in China and even surpassing ticket sales in the U.S. and Canada.

The movie surpassed the previous record in China set by Paramount's "Transformers: The Age of Extinction," which accumulated $319 million.

Unlike "Transformers," "Furious 7" did not include any specific use of Chinese actors or locations to make the film more appealing to Chinese audiences. The movie did, however, benefit from the support of China Film Group.

The state-owned entity, which controls the import and distribution of movies in China, took a nearly 10% stake in "Furious 7," which had little competition from other foreign films.

Meanwhile, Disney/Marvel's "Avengers: Age of Ultron" also did a banner business in China. The superhero action sequel has generated $229.1 million since its May 12 debut, more than double the ticket sales that the first Avengers movie had in China in 2012.

The film's success attests to the popularity of the Marvel franchise and the "unbelievable expansion" of the country's box office, said Dave Hollis, head of international distribution for Walt Disney Studios.

"It's hard … to expect numbers that are as big as what are coming out of China on a regular basis," Hollis said.

While ticket sales are expected to slow somewhat in the second half of the year, analysts predict China will easily surpass last year's record level at the box office, when sales grew 34% to $4.8 billion.

One reason for the growth is that the world's largest country is adding more than 10 new cinema screens a day as developers open new multiplexes in major and secondary cities across the country.

China opened 554 new cinemas and 2,806 screens from January to the end of March, bringing the nation's total capacity to around 5,700 cinemas with 26,000 screens, according to Artisan Gateway, a Shanghai cinema consulting firm. Guangdong, Zhejiang and Henan provinces were the top three markets in cinema openings.

The wider reach is helping deliver big box-office numbers for movies such as "Avengers," which opened on 17,000 screens, most of them in higher-priced 3-D formats.

"There has been an incredible development in building screens both in key cities and in the B and C cities," said Duncan Clark, president of distribution for Universal Pictures International. "That's a critical factor as we can monetize our position by playing in such a wide range of screens."

The expansion has pushed studios to grow ever more closer to China through deals and partnerships. For instance, Universal opened a new office in Beijing last year. The studio next year will release "The Great Wall," a Chinese co-production with Legendary East. The film stars Matt Damon and is currently in production.

But Hollywood's success in China also has fueled growing speculation that the Chinese government may impose new restrictions on foreign films to boost the domestic industry. There are some concerns that the government might move to slow down the flow of foreign releases to boost films made by Chinese crews.

"The Chinese film industry is growing in confidence, but it is a concern for China … to have their marketplace dominated by import movies," said Ellen Eliasoph, chief executive of Village Roadshow Entertainment Group Asia, at a recent conference in Hollywood.

Studios get to keep only a fraction of the ticket sales from the movies they show in the country.

China allows 34 foreign films into the country each year under revenue-sharing agreements, and studios collect only 25% of box-office revenues on those titles. However, studios whose movies are made with Chinese partners and sanctioned as co-productions get about 40% of revenues.

The current quota expires in 2017.

Its ostensible purpose is to protect the domestic film industry. Each year, China Film Group tries to ensure a roughly equal split between foreign films and domestic movies to ensure that local producers aren't crowded out of the market.

Chinese films have been growing audiences as well. Two of the five highest-grossing films in China this year were homegrown: "From Vegas to Macau II" and "Dragon Blade," which generated $148.8 million and $118.6 million, respectively, according to Rentrak.

Some industry experts believe China may seek to balance out the market this year by expanding blackout periods, limiting how long foreign movies play or even releasing similar genre titles at the same time.

The practice, known as "double dating," sparked controversy in 2012 when China Film Group released "Dark Knight Rises" and "The Amazing Spider-Man" simultaneously in the country.

"This is going to be a very interesting year because it's the first time there has been such overwhelming success on the part of foreign import movies" early in the year, Eliasoph said during a panel discussion last month at the Produced by Conference. "It may be the Chinese government looks at the strength of Chinese films right now and says, 'You know what, we're not going to do anything.'"