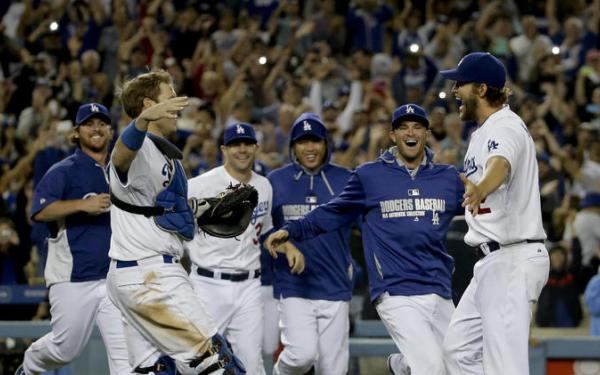 Local fans will get to see events like Los Angeles Dodgers starting pitcher Clayton Kershaw and teammates celebrating his no hitter against the Colorado Rockies in 2014.
(Credit: Chris Carlson / AP)

The first broadcast will be the second of a three-game series against the Arizona Diamondbacks at Dodger Stadium. Charter has some 300,000 subscribers in the Los Angeles region.

The move comes less than two weeks after Charter unveiled a nearly $57-billion deal to acquire Time Warner Cable, which until now had been the only major pay-TV operator to carry SportsNet LA. Charter was motivated to begin offering the games as it seeks to build goodwill for a proposed takeover that would make it the largest pay-TV company in Southern California.

The Stamford, Conn., company didn't want to antagonize Southern California customers who have expressed concerns about the stalemate. There has also been sharp criticism from key government officials, including members of Congress and the Federal Communications Commission.

“The Dodgers are an iconic franchise and part of the fabric of the community,” Tom Rutledge, chief executive of Charter, said in a statement Thursday. “We are very excited to be bringing the Dodgers back to Charter customers in the L.A. area.”

receiving the channel. Charter had been one of the primary pay-TV company holdouts that refused to carry SportsNet LA, which is among the most expensive sports networks in the nation.

Southern California residents who live in Charter's service area — which includes Long Beach, Burbank, Glendale, Malibu, Whittier and parts of Riverside and San Bernardino counties — have been particularly hard-hit by the Dodgers TV blackout. Those fans were prevented from watching the Dodgers on TV because Time Warner Cable does not provide service to those neighborhoods.

Still, other pay TV providers — including DirecTV, Dish Network, AT&T U-verse and Verizon FiOS — have not budged. Executives at those companies have said consumer interest in the channel isn't strong enough to justify the hefty price tag, which consulting firm SNL Kagan has estimated at as much as $4.90 monthly per subscriber home in L.A. Pay-TV companies are trying to hold the line on costs in an effort to hold onto customers.

“This moves things in the right direction,” said Rep. Brad Sherman (D-Sherman Oaks), whose district includes Burbank. “It reduces the problem, but it doesn't eliminate the problem. We still want everyone in Dodgerland to be able to watch the Dodgers.”

Sherman plans to continue lobbying for binding arbitration, which would authorize a mediator to scrutinize the situation and set a price for the channel. “I'm going to be keeping up the effort to get binding arbitration so that every carrier in Los Angeles will be able to carry the channel at a fair price,” he said.

DirecTV, which last year refused to enter binding arbitration, declined to comment, as did several other pay-TV providers.

Neither Time Warner Cable nor Charter would discuss terms of their carriage deal for the sports channel, including how much Charter has agreed to pay.

In the Los Angeles market, SportsNet LA will become Charter's standard-definition Channel 44. It will be broadcast in high definition on Channel 789.

Charter subscribers will not be charged extra for the channel, according to a person familiar with the deal terms who was not authorized to speak publicly.

Charter subscribers in San Luis Obispo and Porterville also will have

access to the channel. Spanish-language broadcasts and Korean-language secondary audio programming broadcasts also will be available in these markets.

“We're thrilled that Dodger fans will now be able to watch SportsNet LA's 24/7 Dodger programming on Charter's systems,” Stan Kasten, CEO of the Dodgers, said in a statement.

Charter's shift in strategy could prompt the other providers to reassess their resistance, but that might not happen for a while. Cox Communications, which provides cable service in Orange County, said Thursday that Charter's move has not changed its position on carrying the channel.

An AT&T spokesperson said the company “is open to discussions, but we won't agree to exorbitant fees that SportsNet LA is seeking because they would be passed on to our customers.”

In addition, DirecTV, the second-largest pay-TV company in the region with more than 1.2 million subscribers, is in the process of being

acquired by telecommunications giant AT&T. That $49-billion deal is expected to win regulatory approval in the next few weeks.

Until Charter's decision, the Dodgers and Time Warner Cable have been dealing with a public relations headache over the channel's limited distribution. Time Warner Cable, in particular, had been in a tight spot — unable to persuade other pay-TV companies to carry the channel.

Making the channel available to Charter customers should help Time Warner Cable trim some of its losses.