Entourage: What else have Grenier and the gang been working on? 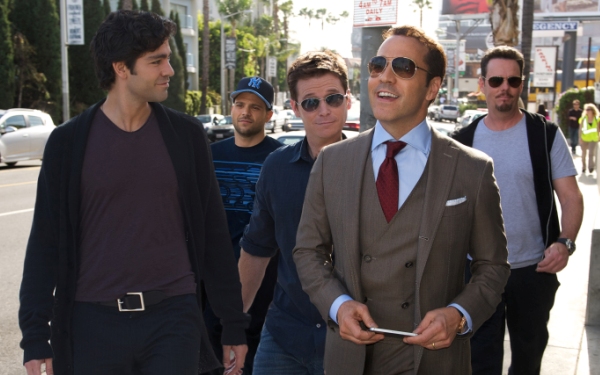 Considering how many episodes of “Entourage” were devoted to whether hotshot actor Vincent Chase (Adrian Grenier) was going to “do the movie” — be it “Queens Boulevard,” “Aquaman” or “Medellin” — it’s fitting the HBO series found its own way to the big screen.

As critics debate the “Entourage” movie’s merits — or lack thereof — and audiences vote with their wallets, here’s a look at what the guys have been up to in the meantime.

The man who plays Vince has not enjoyed quite the same level of success as his on-screen alter ego. His most recent film was the independently produced post-apocalyptic relationship drama “Goodbye World,” which received poor reviews and didn’t make a mark at the box office.

He does have a few projects in the works, though, including the environmental documentary “52: The Search for the Loneliest Whale,” which recently secured $50,000 in funding from Leonardo DiCaprio, and the indie drama “Sex, Death and Bowling.”

Alas, Jason Momoa is starring in the real-life “Aquaman” movie.

Like Grenier, Connolly also starred in an indie dud last year, the ensemble drama “Reach Me.” On the small screen, he booked a role as a series regular on CBS’ “Friends With Better Lives,” but the show lasted only a single season.

Connolly has also done some work on the other side of the camera, directing an ESPN documentary about the New York Islanders (“Big Shot”) and the upcoming features “Dear Eleanor” and “The Wright Girls.”

For Dillon, the “Entourage” finale came just weeks before the debut of his next TV series, “How to Be a Gentleman.” The CBS sitcom, however, got the ax after nine episodes. Dillon’s “Entourage” character, the ever-struggling actor Johnny Drama, would surely commiserate.

More recently Dillon co-starred in the cyber-thriller “The Throwaways,” which premiered in January on Sony’s streaming site Crackle.

One of the more visible members of the “Entourage” crew, Ferrara has had supporting roles in films including “Battleship,” “Lone Survivor,” “Think Like a Man” and “Think Like a Man Too.” His indie movie “Club Life” opens this week in Los Angeles.

After his run as the raging, venom-spewing super-agent Ari Gold, Piven ended up in the logical place: anchoring a British period drama series. He plays the title role in “Mr. Selfridge,” a loose dramatization of the life of Harry Gordon Selfridge, the American who brought recreational shopping to the Britain. A fourth season was ordered in March for the series, which airs on PBS in the States.

Ellin shot a pilot for what sounds like a sort of spiritual sequel to “Entourage,” with Ed Burns, Michael Rapaport, Michael Imperioli and Adrian Pasdar playing four lifelong friends helping one another navigate middle age, but HBO pulled the plug in 2012. He’s currently developing a psychological drama for the cable network titled “Wish.”