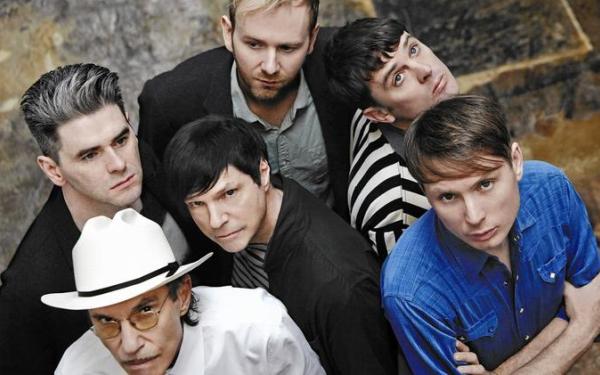 Musicians often say they admire each other's work, but few ever do anything about it.

At least not to the extent that Scottish rock group Franz Ferdinand and long-running L.A. experimentalist duo Sparks have gone with their mutual admiration society.

This week, the bands that span two generations and two continents are releasing "FFS," a full album of songs written and recorded together after more than a decade of appreciating each other's music from afar.

They're also about to launch a major European tour with plans for a slate of U.S. dates in the fall to showcase the marriage of each group's idiosyncratic pop music, which plays out in lively and provocative ways across the album's spunky, dance-floor-ready songs.

There's also something perversely intriguing about a project that began more than a decade ago with a song called "Piss Off" and culminates in an epic centerpiece number called "Collaborations Don't Work."

"Both bands have a real respect for each other's music," said Sparks keyboardist and songwriter Ron Mael, who was sitting a few feet away from his younger brother Russell in the latter's Beverly Hills home, where they do much of their recording. "There's not a similarity in the sounds, there's not a similarity in the singing, but there's kind of a shared idea of ambition and a love of the form of pop music and trying to have that be expanded as much as possible within the constraints of it."

Franz Ferdinand leader Alex Kapranos was born in 1972, when the Maels were already a couple of albums into the career of a band that began as Half-Nelson and was later renamed Sparks. In the '70s, Sparks released the widely acclaimed "Kimono My House" album, which the Maels performed in its entirety this year at the Theatre at Ace Hotel downtown. Kapranos joined them for a couple of numbers at that show.

"I was just a bit too young, so I kind of missed out on Sparks when they had their huge impact in the U.K. in the mid-'70s," Kapranos said separately. But he vividly remembers stumbling onto Sparks' 1974 single "Amateur Hour" among a stack of 45s he picked up in the mid-1990s at a Glasgow, Scotland, flea market when he was 22.

"I had no idea what they looked like," Kapranos said. "This was long before the Internet and YouTube, when you could instantly check out every band you were interested in. The 45 didn't even have a sleeve with a picture.

"But their music sounded unlike any band I'd heard before. And there was this line in the song, 'It's a lot like playing the violin / You cannot start out like Yehudi Menuhin.' That's not your regular lyric writer. I've always been a fan of lyricists who love the pop form and who also stray outside it quite radically, and that's something Ron does regularly."

Sparks also collaborated with German techno-wizard Giorgio Moroder on several albums that influenced the early evolution of techno-dance music — the prime example being the international hit single "No. 1 Song in Heaven" in 1979.

In the '80s the band flirted with mainstream success with "Music That You Can Dance To" and "Cool Places," a hit single and video collaboration with Jane Wiedlin of the Go-Go's. The group spent much of the '90s exploring facets of dance and pop music before largely abandoning the conventional rock format in the early 2000s with broadly ambitious sonic experimentation on the albums "Li'l Beethoven" and "Hello Young Lovers."

Three decades after Sparks was born, Franz Ferdinand came along with its breakthrough debut album, "Franz Ferdinand," and the successor, "You Could Have It So Much Better," which brought the band into the U.S. Top 10 of Billboard's 200 Albums chart.

In 2004, when Franz Ferdinand was first getting attention from its hit single "Take Me Out," the Maels read that the band members cited Sparks as an influence. They subsequently met in L.A. and exchanged pleasantries as well as a nebulous "We should work together sometime" sentiment upon parting.

The Maels didn't want to let it end there, so they wrote "Piss Off" and sent it to Kapranos, guitarist Nick McCarthy, bassist Bob Hardy and drummer Paul Thomson to see what, if any, response they would get.

The idea was tantalizing, but because Franz Ferdinand's career was kicking into high gear, nothing came of it at the time. Flash-forward to 2013, when both bands were booked to perform at the Coachella Valley Music & Arts Festival in Indio, and while both bands were making related tour stops on the way, the Maels ran into Kapranos on the streets of San Francisco.

They renewed the conversation about collaborating but with no grand vision in place. This time the Maels sent an early version of "Collaborations Don't Work" almost as a taunt. Rather than being put off, Kapranos said he and his bandmates welcomed the challenge, and they sent back a response in which Kapranos sings "I ain't no collaborator, I am the partisan rebel in the rocks."

"We were just doing music," Ron Mael said. "Nobody had the courage to say, 'Could this be an album? Could it be something more serious?' So we traded a bunch of things and all of a sudden there were 18 songs and it was like, 'This should be an album, don't you think?'"

Among those songs (16 of which are available on the album's deluxe edition) are thematically offbeat numbers such as "Dictator's Son," sung from the perspective of the have-it-all progeny of an unnamed foreign despot; "Police Encounters," about a hapless guy who runs into dicey situations on a visit to Harlem; and the album's first single and video, "Johnny Delusional," a throbbing minor-key plea from a romance-challenged man who recognizes the target of his love is far beyond his station.

"Tell me, are persistence and stupidity the same / Tell me, is resistance so enticing, please explain," Russell Mael and Kapranos sing in tandem, part of their strategy for integrating their forces.

"The idea was to see how we could make it work as a new entity rather than just making it two separate bands playing together," said Russell Mael. "You're giving up a little of your soul, in hopes of finding a new soul somewhere.

"It's always inspiring to take yourself out of the mode of operating in which you're comfortable," Kapranos said. "It's always good to feel slightly uncomfortable, slightly pushed."

"For us this was a really challenging new idea," Russell added. "You don't like to over think too much the implications of what you're doing if you yourself think it's exciting and refreshing to do something you haven't done but something you also think could be really cool and still provocative and forward thinking.

"Another thing is that we can't think of many precedents. It sounds kind of obvious — two bands working together — but we really couldn't think of a lot of other instances where two fully formed bands that have substantial careers would do an album of completely new material."

And that, members of both groups say, was the motivation for chancing the possibility that the whole enterprise might fail and alienate both bands' followings.

"We didn't think about it too much," Kapranos said with a laugh. "If we had thought about the risks, we probably wouldn't have made it."