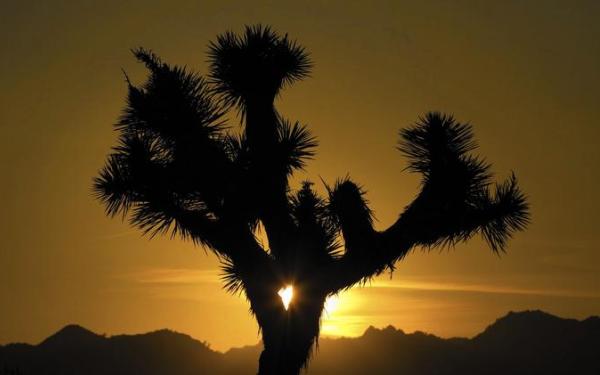 Under canopies of dead angular branches and drooping fronds, UC Riverside ecologist Cameron Barrows made his way across a forest of skeletal Joshua trees that have not reproduced in decades.

As Barrows explained, it's a tough time to be a Joshua tree. Climate change is taking an enormous toll, and the current drought has hastened the decline of a species that is regarded as the symbol of California deserts.

"For Joshua trees, hotter, drier conditions are a problem — but a bigger problem is that what little rainfall occurs evaporates faster," Barrows said. "So, seedlings shrivel up and die before they can put down strong roots."

The region, including nearby Joshua Tree National Park, has not reached average precipitation rates of about 4 inches in several years. So far this year, it's gotten 1.71 inches of rain.

If warmer, drier conditions continue in the coming decades, scientific modeling suggests the trees will lose 90% of their current range in the 800,000-acre park by the end of the century.

With funding from federal wildlife officials, Barrows is trying to find ways to assess the effects of climate change on Joshua trees and the many species they shelter: yucca moths, skipper butterflies, termites, ants, desert night lizards, kangaroo rats and 20 species of birds including Scott's orioles, ladder-backed woodpeckers and great horned owls.

There is more at stake than the fate of the park's estimated 2.5 million Joshua trees, said biologist Rebecca R. Hernandez, a post-doctoral fellow at UC Berkeley. "Beyond its importance as a critical refuge for desert species, the Joshua tree is a cultural signature of California's desert landscape," Hernandez said.

Joshua trees, which grow in the Mojave Desert and nowhere else, have become mainstays for movies, fashion shoots, advertising campaigns and wedding ceremonies. The one that adorned the cover of U2's 1987 album "The Joshua Tree" became a pilgrimage site for fans from around the world until it was blown over by strong winds in 2000.

The species scientists know as Yucca brevifolia isn't actually a tree; it's a succulent. Joshua trees grow to 40 feet high, live more than 200 years and bloom sporadically. In 2013, extensive stands were festooned with yellow and white bell-shaped blossoms that drew tourists eager to take in the scenery before the bloom wilted in the harsh desert sun.

They were named for the biblical figure Joshua by members of a band of Mormons traveling through the Cajon Pass back to Utah in 1857. They imagined the trees as shaggy prophets, their outstretched limbs pointing the way to their promised land.

During the 1980s, development in desert boom towns such as Lancaster and Palmdale replaced about 200,000 Joshua trees with housing tracts and shopping centers. Many more were removed over the last decade to make way for renewable energy facilities.

In the 1990s, moist El Niño conditions triggered explosive growth of exotic grasses among the trees. Feeding off nitrogen-laden smog wafting in from Los Angeles, the grasses have established themselves, leaving Joshua tree forests vulnerable to large-scale brush fires such as one that charred 14,000 acres in 1999.

Now, the biggest threat is climate change, which most of the trees may not be able to overcome. The globe's average temperature is expected to rise roughly by an additional 5 degrees to 7 degrees Fahrenheit by the end of the century, scientists say.

Computer models depicting the distribution of suitable habitat after a roughly 5-degree Fahrenheit rise show Joshua trees retaining just 2% to 10% of their current range, according to studies led by Barrows and published in the scientific journal Biological Conservation.

"Since they grow for about 200 years, we won't see massive die-offs in our lifetime," park Superintendent David Smith said. "But we will see less recruitment of new trees."

In a collaborative effort launched this year, the park, the U.S. Fish and Wildlife Service and a research team led by Barrows organized the first long-term project designed to monitor the Joshua trees' responses to climate change and drought.

The data, collected with help from volunteer citizen scientists from the nonprofit group Earthwatch, will create baseline information to help guide conservation decisions as Joshua trees retreat to cooler and wetter higher elevations. The group has also established monitoring stations to gauge changes in the distributions of Joshua trees and species they support.

Will the region have to change its name one day to, say, "Creosote National Park"?

"Nah," Barrows said with a smile. "There's still going to be enough Joshua trees around here and there."

"Look here, a baby," he said, smiling down on the Joshua tree he estimated was about 10 to 15 years old. "Will it survive? Depends on how much rain we get."