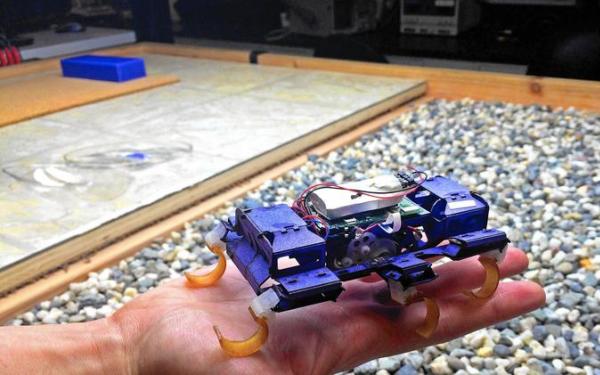 The VelociRoach weighs only an ounce and could soon be deployed in search-and-rescue missions.
(Credit: Tracey Lien, Los Angeles Times)

At a UC Berkeley laboratory, engineers are building cockroach-like robots with a noble purpose — search and rescue.

Smaller than the palm of a hand and weighing an ounce, the robots are fast, nimble, and equipped with microphones and thermostats to detect sound and heat.

"Imagine there's a warehouse that's collapsed," said Ronald Fearing, the director of UC Berkeley's Biomimetic Millisystems Lab, which developed the VelociRoach robot. "You can send in hundreds of these robots, and if there's an opening, they can get through or get close to certain areas to notify rescuers they've found a survivor."

With advances in mobile technology, slightly bigger insect robots are being equipped with smartphone-like features: cameras, gyroscopes and various sensors enabling them to search and map an area. As the technology improves, the insect robots will get smaller and smarter, communicating with one another through algorithms that might, for instance, allow them to fly together in a swarm.

The engineers working on them find inspiration in common pests.

"Think of the common house fly," said Tom Vaneck, who specializes in disruptive technologies at Physical Sciences Inc., a technology research and development firm in Pleasanton, Calif. "When you see a house fly hit a window ... it bounces off and flies away."

Vaneck's lab has developed robots that can fly through cluttered environments like forests, collapsed buildings and mines.

Over at the Wyss Institute, Robert Wood is working on bee-size robots that can be deployed for search-and-rescue operations,

hazardous environment exploration and even pollination.

Robotic insects could transform the hunt for survivors, said biologist Robert Full, who researches biomechanics and physiology at UC Berkeley.

"So if you look at something like the earthquake in Nepal, I'm positive that relatively inexpensive robots would be able to penetrate the rubble quickly and give us some sense of where individuals are trapped, and also give us a hint of where it's structurally safe to move material to get to the survivors," he said.

The idea of looking to insects for robotic inspiration isn't new. Some of the earliest insect-related robots, including the Sutherland Six-Legged Hydraulic Walker from 1983, resembled a cartoonish bug crossed with a lawn mower, and were big enough for a grown human to ride. Many robots were built to better understand insects themselves. In recent years though, engineers have made significant breakthroughs in adapting some of nature's best designs for robotics.

In the case of the VelociRoach, engineers have added little spines to its legs — much like the spines on a cockroach's legs — to give it better traction on different surfaces. And having studied the movement of cockroaches, engineers have figured out that when the critter is navigating rough terrain like tall grass, its body shape allows it to automatically roll on its side and run sideways. Typical boxy robots would often get caught in grass. When fitted in an oval cockroach-like shell,

the robots were able to successfully traverse the terrain.

"What's so great about nature is, what we're trying to do with robotics is solve a lot of really hard problems like how to get around, how to walk on difficult terrain, and nature has already solved it," said Nick Kohut, chief executive of Dash Robotics, which makes small insect-like robots people can put together and program themselves. "It's sort of a cheat sheet where nature did it this way, so maybe we could do it that way."

The cheat sheet doesn't come without challenges, though. Insects have, after all, enjoyed the benefit of evolution, and Vaneck describes nature as having an "infinite budget" when it comes to redesigning organisms until they work. Engineers don't have that benefit. Although they can see what insect behaviors they want to incorporate into their robots, actually getting the robots to pull off those behaviors is tough.

"A lot of what's going on now is the desire to have swarming behavior," Vaneck said. "So getting a large number of robots to go into an area, map it, search for things, identify gas leaks and find survivors. It's very much like what we see in swarm behavior in a hive

At UC Berkeley, Fearing believes the lab might be a few years away from robots that can work together with little human intervention, and engineers around the world continue to struggle with material constraints like robot battery life, weight and robustness.

It'll be only a matter of time before engineers, scientists and biologists are able to overcome those challenges, Vaneck said. In the meantime, they're happy to keep looking to nature for answers.

"It's like standing on the shoulders of giants," he said.