SeaWorld may be bouncing back from 'Blackfish' backlash 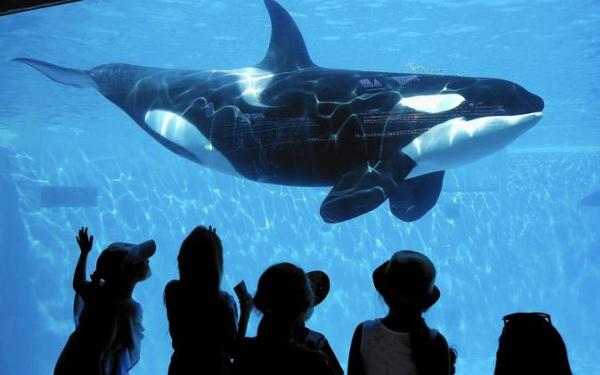 After falling 4.2% in 2014, attendance rose 5.6% in the first three months of this year at SeaWorld’s 11 theme parks and attractions, although an early Easter helped boost crowds.
(Credit: Don Bartletti / Los Angeles Times)

On video at Shamu Stadium, a baby gray whale named JJ, found near death off Marina del Rey, swims out to sea after 14 months of rehabilitation at SeaWorld San Diego.

"Our commitment to animals goes beyond the boundaries of our park," an announcer intones over the din of uplifting music and applause.

The scene moved Andrea Longlade from Toronto, watching with her 6-year-old daughter. "I think it's good that my money is going toward good things," she said.

The park is still reeling from the 2013 documentary "Blackfish," which accused the company's parks of mistreating killer whales. The backlash damaged the company's attendance, earnings and stock price, along with the wholesome image it projects.

In recent months, the Orlando company has been pushing back against the documentary, which it decried as unfair and inaccurate. It has hired a new chief executive, announced plans for larger orca tanks and launched a $10-million advertising campaign defending its treatment of whales and promoting the company's work to benefit animals.

As part of its new $10-million pledge to fund conservation of orcas in the wild, SeaWorld last month committed $1.5 million to a partnership with the National Fish and Wildlife Foundation to help rebuild the population of endangered "southern resident" killer whales found off the Pacific Northwest.

SeaWorld's efforts to rescue its reputation may be helping.

After falling 4.2% in 2014, attendance rose 5.6% in the first three months of this year at its 11 theme parks and attractions, although SeaWorld noted an early Easter helped boost crowds. Revenue rose just 1% because the company had to use "promotional offerings" to help attract visitors, who spent less on average than a year earlier.

Joel Manby, SeaWorld's new CEO, told investors he was encouraged by the results so far.

"It's very early, though, and it's part of a long-term, very targeted initiative," Manby said in a conference call discussing the firm's first-quarter financial results. "We have heard from our partners, our employees, most importantly, our guests that they're happy that we're out there disseminating the facts."

Analysts disagree on whether the counterattack will work, or whether the "Blackfish" controversy will permanently damage SeaWorld's future profitability.

But Alex Petti, an analyst with Seeking Alpha, disagreed. Eventually, he said, customers will forget about the movie and it "will have less of an effect this year."

The company acknowledges that the documentary, along with activity by ardent animal rights groups, has prompted it to recognize that attitudes toward animal welfare are evolving among the public.

"The sensitivities have changed," said Brad Andrews, chief zoological officer at SeaWorld. "There is a lot more sophistication out there."

Wendy Patrick, a lawyer and business ethics lecturer at San Diego State University, said companies have to adjust the way they do business: "It really is a sign of the times that any time you are working with animals you have to be completely transparent and proactive."

Indeed, in the last decade, 1,100 animal care laws have been adopted across the country, including regulations to expand cage space for hens and increase the fines for cockfighting, said Wayne Pacelle, president and chief executive of the Humane Society of the United States, whose budget has ballooned from $75 million a decade ago to $190 million last year.

SeaWorld and 'Blackfish': In a story in the June 6 Business section about SeaWorld Entertainment Inc.’s efforts to rebound from allegations in the documentary “Blackfish” that its parks mistreat killer whales, the last name of Wayne Pacelle of the Humane Society of the United States was misspelled as Parcell. Additionally, the organization was incorrectly identified as the Humane Society of America.

In March, the famed touring circus said it would relocate 13 Asian elephants to a conservation area in Florida by 2018. The circus said it could no longer battle local laws that ban the use of sharp bull hooks to manage the elephants.

"It makes it difficult, if not impossible, to run this circus," said Stephen Payne, a spokesman for Feld Entertainment Inc, parent company of Ringling Bros.

"A lot of these animal-abusing businesses are taking a lot of heat from the public as a result of increased awareness of abuse of animals in captivity," said Brittany Peet, deputy director of captive animal law enforcement for PETA. "The market is forcing them to come out and get in front of the public concern."

Although attendance at zoos and aquariums across the country has remained steady for years, many have augmented their conservation efforts to appeal to the public's animal-friendly attitude.

"Going to a zoo today is a much different experience than going to a zoo 20 years ago," said Rob Vernon, senior vice president of the Assn. of Zoos and Aquariums, a nonprofit that represents more than 200 attractions in the U.S.

"The exhibits are different. What people see is different. The educational programs are vastly different. Now more than ever zoos and aquariums see themselves as conservation organizations," he said.

SeaWorld has a long history of rescuing sea animals. But the "Blackfish" accusations forced the company to more heavily promote its work.

The company's campaign of TV, print and online ads launched in March to correct what the company says are "inaccuracies" repeated by "animal extremist" organizations.

"Caring for the whales, we have a great responsibility to get that right," SeaWorld veterinarian Lara Croft says in one of the TV commercials.

In addition to the $10-million pledge for killer whale conservation and research, SeaWorld intends to establish an independent advisory committee of scientists to oversee its orca program.

SeaWorld representatives say their efforts are not an act of contrition.

"We don't have anything to apologize for," SeaWorld spokesman Fred Jacobs said.

He replaced Jim Atchison, who resigned in December as chief executive and president but stayed on as a director and consultant.

For some SeaWorld fans, the accusations leveled by "Blackfish" and animal rights groups don't ring true.

"The staff members here love the animals," said Darlene Timson, a retired legal secretary and annual pass holder for 51 straight years. "PETA is the dumbest group out there."

Shawnee Hale, a 30-year-old online video producer from Burbank, has vowed never to return to the park since seeing "Blackfish."

"Watching the movie highlighted the fact that SeaWorld lies to its guests, which makes me feel untrusting of the company overall," she said.