DC Comics’ universe shifts as it moves from Manhattan to be near Warner Bros. Studios. 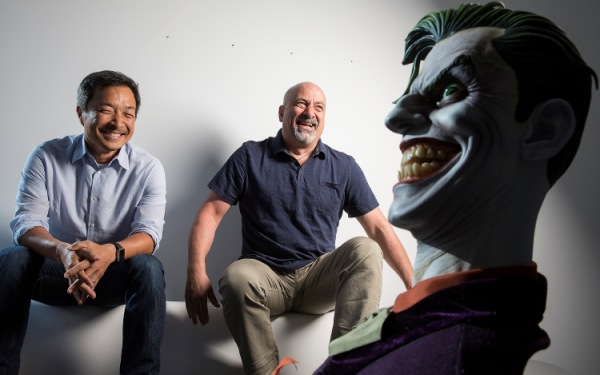 Certain images come to mind for comic book aficionados when they envision the working confines of DC Comics.

We picture battered desks and drafting tables inside an old bullpen, deep in the heart of Gotham City, where the artistic descendants of comic book heroes Jerry Siegel, Bob Kane and Bill Finger dream up new adventures for Superman and Batman.

So what are we doing in this slick Burbank office building a few blocks from corporate parent Warner Bros. Studios? A Batman statue stands guard as we walk down the hall to an elevator that transports us to a modern waiting room where a life-sized Clark Kent statue — wearing a Superman tie — seems to be taking notes as he fields a phone call.

“Five years ago, the DC presence in L.A. was three people in an office with two rooms on the lot,” says Jim Lee, co-publisher with Dan DiDio of DC Comics. “Here we are, five years later, 2 1/2 floors with 240 people in these amazing offices. That really required a lot of conviction and courage and vision.”

As recently as April, DC Comics’ staff edited and consolidated the work of far-flung writers, pencil artists and inkers and others into comic books in midtown Manhattan, across from the Ed Sullivan Theater, where until last month “Late Show With David Letterman” was shot. But under the guidance of DC Entertainment head Diane Nelson, the DC Comics empire has gone Hollywood.

Lee and DiDio might put it another way: It’s all about “Convergence.”

Transporting its headquarters from 1700 Broadway in New York City to 2900 Alameda in Burbank was no small undertaking, but it did help give birth to one of DC’s biggest story lines. Its latest mega-crossover title, “Convergence,” brings together characters from different decades in a time-spanning epic that pits many superheroes and their variant forms (think Victorian-era Batman or Russian Superman) against one another.

Convergence is not just a description of the universe-altering action in the panels of the comic book miniseries, it also describes the company’s new editorial path as it relocates closer to its on-screen brethren at Warner Bros.

“Everything about ‘Convergence’ is about transition,” DiDio says. “It’s about celebration, but really transitioning to the next phase. It was the last epic story from the editorial team based in New York City.”

Still, it was a tough move. Only half of the New York staff decided to relocate, even though the company offered jobs to all in the Manhattan office. One-third of the current staff relocated from New York, one-third was already based in Burbank and one-third are new hires.

“It’s always sad when you see people you’ve worked with for a while leave,” DiDio says. “But it does create opportunity. It brings in new sets of eyes, new blood and allows us to reexamine how we work. It allows us to challenge ourselves to find ways to work better if we can.”

The trick is to bring in new blood without alienating longtime readers.

“We have a base set of characters that everybody’s familiar with — you know, Batman, Superman, Wonder Woman — that have been around for a number of years,” DiDio says, “and it’s our responsibility to find ways to freshen them up.”

“Convergence” is just the latest of many of the company’s miniseries that have seemingly changed the landscape of the DC universe. “Flashpoint,” “Brightest Day” and the reintroduction of many fan favorites in the company’s New 52 jump-start are initiatives that they hoped would bring in new readers. They’ve continued this editorial revamp with the launch, and relaunch, of 24 of DC’s 49 books.

“We’re broadening the horizons of what we publish,” Lee says. “We’re bringing in fresh new voices from the creator pool. We are publishing different kinds of artwork that you may not have found traditionally published at DC. We’re welcoming old fans and new fans to that experience.”

Both Lee and DiDio are especially excited about a book called “Prez,” which posits the question of what it would be like to have a nonpolitician — a teenage girl — as the most powerful leader in the world. A new book told with a new slant, it’s from just one of the “new voices” that Lee hinted at. These also include creators who are ex-CIA employees, YA graphic novel specialists and animation writers.

Books like these also help to address the issue of diversity in comics, both on the page and behind the scenes. The growth of women and minorities as comic book readers is something that has become one of the company’s highest priorities.

“When we did the ‘New 52,’ we knew it brought in a lot of new readers,” Lee says. “What we’ve seen in the four years since, is that there were a lot of readers out there who didn’t necessarily have big voices in our industry.”

“Female readers, the LGBT community ... we have this big amazing universe to tell lots of diverse stories,” Lee continues. “We feel that it is the future of our business. It’s not going to just happen naturally.... I think if our goal is to mirror the diversity that is our readership, we need to move with some speed and some sense of purpose.”

This proliferation of new fans has, to a degree, alienated older readers. The new books seemingly throw decades of history out of the window as heroes are reintroduced to a new generation, often with different origins or different relationships established (Wonder Woman and Superman dating?!). DiDio and Lee are aware of the problem but don’t have any easy solutions.

“It’s an interesting business for all of us now. It’s very hard to take a story line and move it forward in an environment that’s constantly backward looking,” says DiDio. “There was a lot of trepidation from the fans thinking and wondering what would happen to their favorite characters. But one of our main goals we tried to do throughout the story was to make sure that we treat all of those characters with a level of respect.”

What they won’t do is keep the status quo.

“If we just sit pat and say, ‘We’re only catering to fans who read comics 20 years ago,’” Lee says. “There’s just no sound business strategy behind that.”

Many of the new fans, and old, are enjoying DC characters in other media with TV shows such as “Arrow” and “The Flash,” games such as “Batman: Arkham Knight” and are looking forward to the movies “Suicide Squad” and “Batman v. Superman: Dawn of Justice.”

The move to Burbank puts the publishing arm within walking distance of its sister company Warner Bros. When popular characters emerge from other media, as Jimmy Olsen did on radio and Harley Quinn on an animated TV show, it makes sense that the companies should interact as much as possible.

“One of the exciting things about being so close to the rest of the company is that you see all of the experimentation and the fun they’re having with our characters,” says Lee. “We want to transfer that level of energy to our publishing team [and] to recognize that for us to be meaningful within this whole ecosystem, we have to be leaders and not just this dusty archive of source material.”

DiDio also sees that the popularity of the DC brand and characters goes beyond the page and the screen. Wonder Woman and Batman may be household names but society has also embraced the once outlier culture of comics as part of pop culture.

“It’s really the experience of what San Diego Comic-Con has become,” DiDio says. “It’s a pop culture phenomenon. We’ve seen an explosion of convention attendance over the past couple of years. Fifty percent of that audience are first-timers, but they understand that there’s something going on and that there’s a phenomenon out there. By coming to these shows, they’re exposed to what we do.”

That seems to be the main purpose of the physical move and the launch of new books: exposure. Not only to new readers, but to the rest of the DC and Warner Bros. family that is increasingly synergistic in its approach to superheroes. For DiDio and Lee, all of it, especially the move, is a culmination of a revitalization movement.

“So much of what I was missing working 3,000 miles away was the pick-up conversations in the hallways that could lead to some cool idea,” Lee says. “It’s giving the whole place a new sense of energy and focus.”

It’s also a chance for cool new office details, like the chess set in the lobby where Captain Cold faces off against Flash surrounded by new-age furniture and a view of Burbank office buildings, one more sign of the company’s arrival in Hollywood.