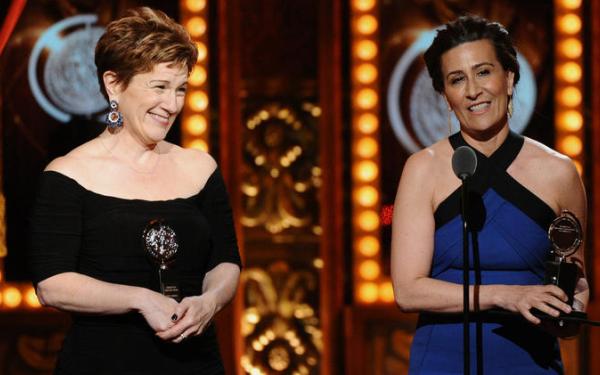 Although Jeanine Tesori's grandfather was a composer, she didn't realize writing music could be a career for women until she saw Linda Twine conduct "Lena Horne: The Lady and Her Music" in 1981.

Fast-forward 34 years to the 2015 Tony Awards, where Tesori and Lisa Kron made history for becoming the first female writing team to win a Tony for musical score.

The award was just one of a handful of significant moments for women at this year's Tonys, where diversity was a topic both in jokes and in speeches from presenters and award recipients.

Tesori and Kron took home the award for their work on the Tony-winning musical "Fun Home," based on a 2006 graphic coming-of-age memoir by well-known lesbian cartoonist Alison Bechdel. The story line concerns an eccentric family that runs a funeral home in a small Pennsylvania town.

In their acceptance speech, most of which took place during a commercial break, the songwriters noted the slow pace of change for women on Broadway.

"It's statistically 10% better" than it used to be, Kron joked. "It's unacceptably low, but it seems that perhaps we're making some progress."

Meanwhile, Tesori highlighted the importance of "Ring of Keys," a song about sexual discovery in "Fun Home" performed by actress Sydney Lucas on the telecast.

It's "not a song of love, it's a song of identification," she said. "Because for girls, you have to see it to be it. I'm so proud to be standing here with Lisa Kron. We stand on the shoulders of other women who stand before us."

Twitter erupted with praise for the duo, for what some described as "shattering the glass ceiling at the Tonys." But the award wasn't the only one that was notable for its female winner.

Kron also won the Tony for best book for a musical for "Fun Home," and Marianne Elliott picked up the director of a play award for "The Curious Incident of the Dog in the Night-time." Paule Constable won for lighting design of a play for "The Curious Incident," and Natasha Katz took the trophy for lighting design of a musical for "An American in Paris."

Ruthie Ann Miles, who won a Tony as a featured actress in "The King and I," ignited chatter on social media, ranging from comedic images of her reading her acceptance speech from an iPhone to praise for a non-white woman taking home a statuette.

One person wrote via Twitter: "Young Asian American faces will see @RuthieAnnMiles win a Tony tonight and know that their dreams are possible! CONGRATS!!! @TheTonyAwards."

Another Twitter user quipped, "I am loving how so many women are winning Tonys tonight. Take note, @theAcademy."