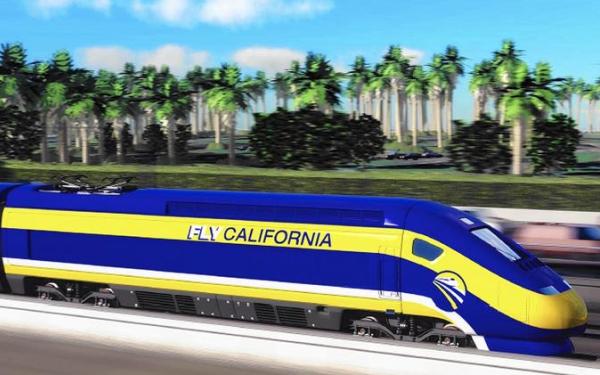 Local elected officials and homeowners groups are demanding the state abandon a proposed route that would roughly parallel California 14 through the mountains between Palmdale and San Fernando.
(Credit: An artist's rendering of a high-speed train in California.)

A diverse alliance of communities — including Los Angeles County's third-largest city — is fighting California's long-planned bullet train route into the heart of the San Fernando Valley, saying it would bring irreparable harm.

The coordinated protest by residents and elected officials from suburban Santa Clarita, as well as blue-collar San Fernando, Pacoima and other communities, present a potent political challenge as state officials push to speed up construction of the $68-billion system in densely populated Southern California.

Local elected officials and homeowners groups are demanding the state abandon a proposed route that would roughly parallel California 14 through the mountains between Palmdale and San Fernando. That alignment would include a considerable amount of above-ground track and a series of tunnels.

The coalition of communities is demanding that only routes that are predominantly underground should be considered.

The growing resistance is coming in part from urban, working-class neighborhoods that are portraying the surface route as an environmental injustice. Notably, those communities are longtime supporters of state Democrats who championed the project.

"Our calls for social, economic and environmental justice have been ignored," Fajardo said. "The city could go into bankruptcy."

Lisa Marie Alley, a spokeswoman for the rail authority, said the agency has been active and engaged with all the communities. "We will continue to have open dialogue with them," she said. "This is the hard part of the process."

A 62-page analysis by the rail authority that was released last week details some of the effects of various routes on the communities. The analysis shows that within a half-mile of the track, there could be noise and vibration affecting about 20,000 residences, 25 parks, 47 schools, 48 churches and nine hotels, as well as archaeological sites and wetlands. The analysis also indicates that at least one route would require trains to travel at 160 mph in a long curved section of track, despite the past projections that trains could travel 220 mph after leaving L.A.'s Union Station.

One of the biggest demonstrations of the growing concerns in north county communities could come Tuesday. Organizers say residents and city officials will be coming by buses and auto caravans to a California High-Speed Rail Authority board meeting in downtown Los Angeles. A rally is planned beforehand, and large numbers of people are expected to address the board during a public forum.

"The high-speed rail cannot come barreling through our community," Santa Clarita Mayor Marsha McLean said. "Some of the plans will be devastating."

The state has recently begun considering three alternative routes to the longer freeway alignment. Those would involve roughly 20 miles of tunnels from Burbank through the Angeles National Forest, including portions of the San Gabriel Mountains National Monument, and have drawn their own opposition.

Critics of the underground routes include residents who depend on wells fed by forest aquifers, along with neighborhood groups concerned about the disruption large tunnel boring machines could cause. Apart from community opposition, the tunnel options — among the major such engineering undertakings in the world — could face significant technological challenges. Critics say subsurface routes would traverse complex fault zones, gas deposits, abandoned mines and water basins important to Southern California's water supply. It's also unclear whether a tunnel route could be completed within the project's existing budget.

On Friday, the L.A. City Council adopted a resolution calling on the state to conduct advanced environmental studies on water quality, noise, seismic impacts and tunneling.

David DiPinto, a leader of groups in the Shadow Hills area of Los Angeles, said he expects those studies to slow down the project, which is supposed to start initial 220 mph service between Burbank and Merced in seven years. Alley repeated the state's contention that the segment can be built on schedule.

If a tunnel route through the San Gabriel Mountains is selected, it would run thousands of feet beneath some peaks. DiPinto and other activists claim the state will have to do extensive analysis to determine the hydrological effects of such tunneling.

Residents of Kagel Canyon, an unincorporated county area, say the three tunnel routes pose potential risks to wells that supply hundreds of homes in their area and aquifers that provide water to the L.A. Basin. "Their routes bisect these critical springs," said Kelly Decker, a canyon resident. "To push forward with routes that dewater our springs is unconscionable. Their response is we will mitigate it.

"They act like they have an unlimited purse," she said.