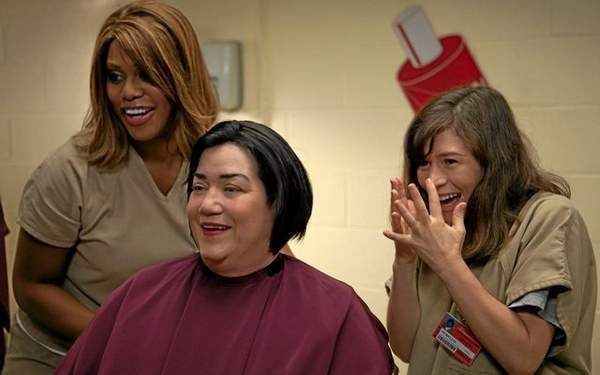 As “Orange Is the New Black” enters its third season, it has become evident that the show has grown beyond the experiences of an imprisoned white, privileged woman, Piper (Taylor Schilling), and has taken on the personalities of its diverse cast.

Undoubtedly, that was always the goal of creator and writer Jenji Kohan, who knew pitching a show about women of mostly color behind bars would be difficult, even to the adventurous Netflix.

If “Orange” had stumbled, it would have been one more failure at diversity on screen, but the series’ success has more shows scrambling to add more diversity to their casts.

“Even since we debuted in 2013, the culture has changed so much,” observes Laverne Cox, the transgender actress who plays the transgender Sophia, imprisoned for credit-card fraud to pay for her sex-change surgeries.

Three years ago Cox, an Alabama native, was working in a restaurant. She recently appeared in a CBS pilot as a transgender lawyer and believes the diversity being seen in that pilot and on upcoming network shows is because of the impact of “Orange.”

Earlier this year the Screen Actors Guild gave the award for outstanding performance by an ensemble in a comedy series to the predominantly female cast of “Orange.”

“I don’t think the different types of beautiful women that came up to accept the SAG Award onstage has ever been seen,” says one of them, Selenis Leyva, who plays Gloria Mendoza in the series. Her character ended up in prison after trying to get out of an abusive relationship and becomes head of the “Spanish Harlem” crew. Leyva, along with Lea DeLaria and Danielle Brooks, are being moved up to full-time cast members this year.

They didn’t know where their characters were going when they signed on in Season 1. Leyva notes that she spent the first year mostly cracking one-liners but that along the way Kohan complimented her, saying that she made her want to write more for Gloria.

DeLaria, who was the first openly gay standup comedian to appear on television with a 1993 appearance on “The Arsenio Hall Show,” had given up on being on “Orange” and had moved to London when she got the call. She plays Carrie “Big Boo” Black, who has had a few prison wives.

The 57-year-old comedian-singer says one of the things that make “Orange” different is that “These are real women talking about their lives and not about how to get a man.” She jokes that because the inmates are in jumpsuits, makeup can mean putting “some more brown on their teeth.”

“I think we’re thumbing our noses at the notion that there’s a certain way you have to look or certainly have to be to be a girl,” says DeLaria. “What the show is saying is that no matter what your race or sexual preferences, you are free to be you.”

Leyva hints that Season 3 will play up new relationships between the inmates of Litchfield Prison and go more into their backstories. “It’s definitely going to show a side of women behind bars that we haven’t seen yet on the show,” she says.

Brooks, who plays Tasha “Taystee” Jefferson, is one of the youngest on the show, having graduated from Juilliard in 2011. “Orange” is her first series, and her first scene was in the series’ revealing opening in the prison showers. She had only been signed for two episodes, so, as she says, “We didn’t know what we had on our hands.”

Actually, no one still does — at least in television awards’ limited perceptions. “Orange” has moved from the comedy to drama categories for the Emmys this year. (Nominations will be out July 16.)

Brooks, who is part of the Lane Bryant “I’m no angel” ads for “curvy” women, says it doesn’t matter for them as actresses. “We have to come from a truthful place. People are hurting, and that’s why it’s a dramedy.” Like other cast members, she would like to see the Emmys recognize dramedy as a category.

The actress, who will make her Broadway debut in “The Color Purple” in November, says the new “Orange” season will deal with faith in a broad way. “Throughout Season 1 to Season 3, these are women that are all about survival. So survival has to be connected to faith,” says Brooks. “All of us are searching for something to believe in to get through our fights and our struggles in prison.”

As for where the show is going, Cox says, “Jenji has a plan. There is a method to the madness.” She adds that Season 3 is her favorite so far: “I got to do some stuff that I’ve never gotten to do before that I’ve always wanted to do on camera. The stories just hit me in my gut, every single one.”