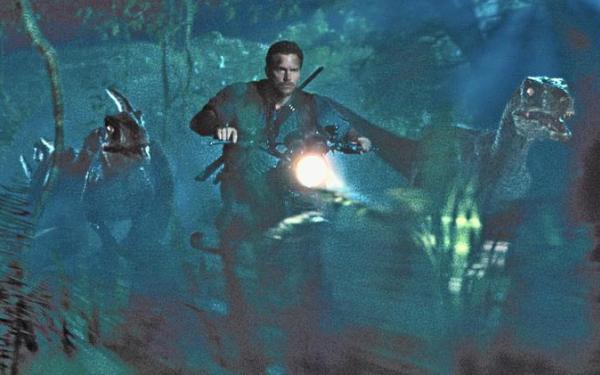 Jurassic World, starring Chris Pratt, is expected to bring in a domestic haul of $100 million to $130 million, according to people familiar with pre-release audience surveys.
(Credit: Universal Pictures and Amblin)

The big blockbuster summer movie season all of Hollywood was hoping for appears to be faltering amid a lack of breakout hits.

There's been a steady stream of double-digit weekly declines in ticket sales since Memorial Day, the unofficial kickoff for what has become the movie industry's most lucrative period.

The last three weekends in a row hovered near 20% below the year-earlier period — and that is particularly troubling since 2014 fielded the worst summer since 1997 when adjusted for inflation.

The major Hollywood studios have so far seen all of their early summer entries unable to surpass expectations, and in a number of instances, films fells short. "Tomorrowland" couldn't draw big numbers despite a starring role by George Clooney, and even the critically acclaimed "Spy" wasn't able to avoid a weekly slide.

The declines have put Tinseltown on notice that the next few months of box-office receipts might not vault the industry to the record levels some analysts had forecast.

"Memorial Day weekend was a turning point for this summer," said Paul Dergarabedian, senior media analyst at the measurement firm Rentrak. "Up until then, we had seen great performances one after the next. The record-breaking summer season seemed assured because there was positive momentum going forward."

At least some of the drop-off is blamed on a trend in which moviegoers wait for films to come out on cable television, video on demand or streaming sites such as Netflix and Amazon.

But the summer slate isn't necessarily doomed to slump.

Studios have yet to roll out their big-budget action sequels that have powered previous years, and tend to be among the biggest draws for audiences. The big test will come this weekend when "Jurassic World," the Steven Spielberg franchise that started 22 years ago, hits the big screen.

Performance of the big-budget action movie might help analysts better gauge how the rest of the summer will go. "Jurassic World" is expected to bring in a domestic haul of $100 million to $130 million, according to people familiar with pre-release audience surveys.

If early tracking estimates hold, "Jurassic World" could become the third-highest film opening of the year, just behind the $147.2-million launch of "Furious 7" and the $191.3-million launch of "Avengers: Age of Ultron." The dinosaur action film may also edge ahead of Warner Bros.' "Man of Steel," which debuted with $116.6 million in 2013, to become the biggest June opening.

"It's perfect timing," said Phil Contrino, vice president and chief analyst of BoxOffice.com. "The marketplace is going to make a comeback really fast. We're going to see everything pick up starting this weekend with nonstop strong movies."

Indeed, moviegoers have some big popcorn releases on deck. Animated features — box-office catnip most summers — will include "Minions" and "Inside Out." There's also the latest in the "Mission: Impossible" and "Terminator" franchises, as well as sequels to "Ted" and "Magic Mike."

Analysts earlier this year forecast that these films would combine to set records, helping box-office receipts climb to a projected $11.2 billion by the end of 2015. The box office is up about 2.5% year-to-date.

Domestic rollouts don't necessarily determine the fate of a film. Studios also count on the global box office to give films life in markets outside North America.

For example, though "Mad Max: Fury Road" had a robust opening in the U.S. and Canada, it came in at No. 2 when up against "Pitch Perfect 2" in mid-May. However, that same weekend, it was the No. 1 new movie in Australia, France, Russia, Spain and more than 30 other markets.

"Jurassic World" opens in 65 international territories along with the U.S. and Canada this weekend, starting in China, France, Belgium, Egypt, Indonesia and the Philippines on Wednesday.

The movie's star, Chris Pratt, has been making headlines since he shaped up for his role in last summer's surprise blockbuster "Guardians of the Galaxy." The 35-year-old has become known as a man on the rise in Hollywood.

"It's the perfect storm of strong elements coming together at just the right time," Contrino said of the marketing campaign and Pratt's notoriety.

As of Tuesday, the film was dominating the weekend's ticket sales on both Fandango and MovieTickets.com.

Blog
The Godfather, Coda: The Death of Michael Corleone coming to Blu-Ray and Digital on Dec. 8th
806 views

Blog
Is Shia LaBeouf in ‘brownface’? Cholo role raises question of who gets to adopt whose culture
1,559 views

Blog
Movie theaters are still shut down — and with them, the power of challenging cinema
834 views