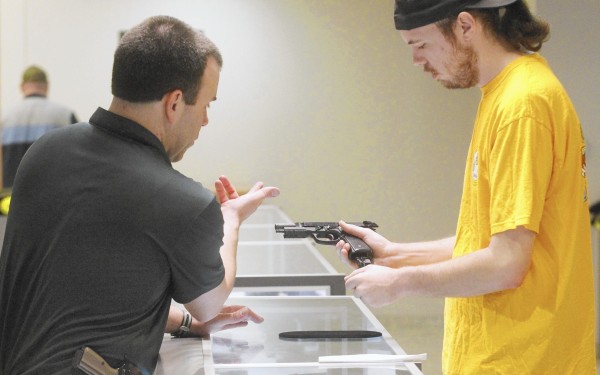 Instructor Mike Campbell shows Dwayne Reese a gun at the Frisco Gun Club in Frisco, Texas. The state is moving to allow guns to be carried under more circumstances, including on college campuses.
(Credit: Michael Ainsworth / Dallas Morning News)

This year more than a dozen states have considered measures that would allow the carrying of concealed weapons on college campuses, but so far only Texas has approved a so-called campus-carry law.

By overwhelming votes, Texas lawmakers approved the legislation last week, and Republican Gov. Greg Abbott has said he will sign it into law. It would take effect in August 2016. Texas would then join seven other states that already allow the carrying of concealed weapons on public college campuses — Colorado, Idaho, Kansas, Mississippi, Oregon, Utah and Wisconsin, according to the National Conference of State Legislatures.

Nineteen other states ban concealed weapons on campuses, including California, Florida and New York. As so often happens with gun legislation, the rest of the nation is a hodgepodge of laws. The remaining 23 states, including Alabama and Arizona, leave campus-carry decisions to college officials or their state boards of regents.

Lawmakers proposed campus-carry measures in 15 states this year, according to Laura Cutilletta, a senior staff attorney at the San Francisco-based Law Center to Prevent Gun Violence. An Ohio proposal is pending.

"For something that was such a big priority for the [National Rifle Assn.] this year, this was a failure," said Cutilletta, adding that if more state campus-carry measures pass, "it won't be because of the policy itself."

Opponents of such laws say that allowing more guns on campus does little to improve security and instead makes it more likely that shootings will occur, including accidental gunfire and suicides.

While there have been few studies of gun violence on campus, Cutilletta says opponents also fear guns will have a chilling effect on students' free speech.

"You want to encourage people to be debating things and having heated discussions. Introducing weapons into that kind of environment — some people have said it could curb that free flow of ideas and make people less likely to express themselves," she said.

Proponents of the law say it will make campuses safer and allow law-abiding people to exercise their 2nd Amendment rights.

Cutilletta says she expects Texas universities will want to limit guns in certain areas, such as dorms, where prospective students "might not want to live with someone who has a gun. I think arguments can be made for why you might want to exempt those areas."

The Texas legislation includes a compromise provision worked out as the bill moved through the Legislature. The measure allows public universities to leave portions of campus gun-free, and give private universities the chance to opt out of the law, although it's not clear how many schools might succeed in becoming exempt from the law.

"It will be interesting to see how they handle the fact that they still have some authority and see what areas they prohibit and how that works out," Cutilletta said.

The University of Colorado at Boulder remained a gun-free zone long after the state passed its 2003 Concealed Carry Act. But after the Virginia Tech campus shooting in 2008, in which a gunman killed 32 people and himself, Colorado students formed a gun rights group, sued, and in 2012 won the right to carry on campus.

After Utah allowed guns on campuses in 2004, the University of Utah also tried to maintain its decades-long ban. University officials sued, but in 2006 the state Supreme Court ruled against them.

David Kopel, research director at the Denver-based Independence Institute, said he and his fellow gun rights advocates recognized that certain portions of campuses may need to remain gun-free, such as hospitals and other healthcare facilities. The Texas compromise will be closely watched by those in other states hoping to pass similar measures, he said.

"My prediction is that, as with licensed carry in general, this isn't something that's going to sweep the country," Kopel said. "It's going to be more of a year-by-year thing; more states will adopt it once they see how it works in the earlier ones" — Texas in particular.

"It's a big and influential state with huge universities," said Kopel, who also serves as an adjunct professor of advanced constitutional law at the University of Denver.

"In any given year, you'll find more states where campus-carry bills failed than where they passed. It's a marginal process," he said.

Kopel said the biggest argument against allowing guns on campus — that students' tempers might flare and provoke a mass shooting — have been disproved in Colorado, Idaho and other states where the measures have been on the books for years.

"It's all these doomsday scenarios that don't come true: arguments in the classrooms and then the guns come out. Utah's had it for a long time and that hasn't happened," he said.