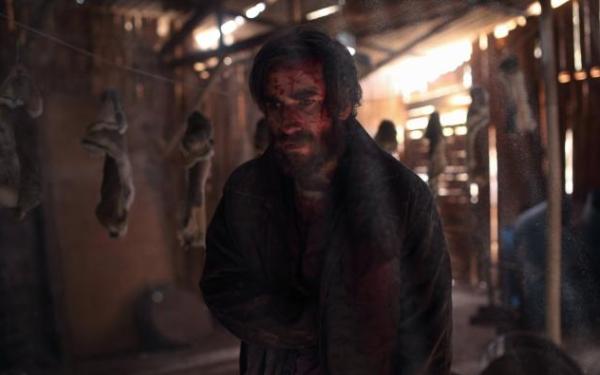 You know when your mother told you, and rather dramatically so, to never talk to strangers? If you, like me, happened to shrug it off with a string of “yeah, yeah, yeahs,” then perhaps Guillermo Amoedo will make you rethink your mother’s wise words, for The Stranger has come, and he carries nothing in his pockets but bloodshed and death.

For Amoedo, tales of horror, both natural and supernatural, have become engrained in his body of work as a screenwriter, ranging from the wild terrors in The Green Inferno (2013) to the all-too-easy-to-imagine consequences of Aftershock (2012). With The Stranger, the young Uruguayan’s first major turn as a director, he now explores the grisly affairs of creatures of the night. You might call them vampires or zombies or some combination of the two, but he doesn’t, and that’s the first step he takes in the right direction, before taking a couple steps in the wrong one.

It begins like many horror films do, with a hooded figure. When Martin (Cristobal Tapia Montt) shows up in a small town on the doorstep of an unsuspecting teen named Peter (Nicolás Durán), he simply wants to know where he can find a woman named Ana (Lorenza Izzo) and seems oddly unsurprised when Peter directs him to the cemetery. This stranger is clearly a man with baggage, as proven when he lets three hoodlum kids beat him to death, or so we and the policeman who helps cover the murder up are led to believe. Witnessing all of it, and seeing that the man still breathes, Peter brings the stranger home to save his life…. If only there was a life to be saved in the first place.

The rest is a lot of what you’d expect from a film with horror master Eli Roth attached as producer. It’s bloody and it’s gory, and there’s a penchant for seeing no person, young or old, as off limits. Where Amoedo differs from Roth, however, is in the value of character over gratuitous violence and slaughter, something that many viewers with a more sensitive gag reflex can appreciate.

When Martin shows a taste for blood, instead of focusing on how much he likes to tear people’s throats off, Amoedo turns to his overwhelming feeling of remorse, an emotion that has afflicted his past, present, and future and one that is also inextricably tied to the likes of Peter. Martin doesn’t want to be this monster and he doesn’t want anyone else to be this monster, because he knows that it is the key to the destruction of humanity.

But, of course, you can imagine that a bit of a domino effect sweeps the town as he inevitably, and regretfully, infects, out of all people, the son of a corrupt policeman who’s willing to avenge/help his vampire son in any way possible. This is where Amoedo’s writing shines, but where the actors unfortunately don’t follow through with the material.

As Martin, Montt, a Chilean transport, portrays the brooding, mysterious type well, but doesn’t seem to fully embrace the complex emotional pressures that challenge Martin’s mind and body. Like his character, he oft hides in the shadows from moments of intensity that could make Martin’s story impactful rather than half-baked.

Durán does a solid job as Peter, a kid who has no idea what he’s getting himself into when he saves Martin’s life and has a pair of eyes that were meant to stare into a camera with utmost passion. But where Durán’s strength shines, the actors he shares the stage with fall flat. Alessandra Guerzoni as his mother is frustratingly strained and forced in her performance, letting important emotional moments go by unclaimed.

Where the real disappointment lies, however, is in Luis Gnecco as the villain and corrupt policeman Lieutenant De Luca. It was unfortunate to watch a baddie with such potential come across as tepid and robotic as Gnecco did. His character himself does some truly horrible things, yes, but Gnecco’s embodiment of that cruelty never truly manifested into something worth being scared of.

In this sense, Amoedo’s first stab as director in the American film market becomes a matter of execution. It’s a world we’ve seen before, but shown from a more modest angle, which is a valiant effort and one that shows potential in his work; however, until more care is taken in the casting process, or a firmer hand extends from the director’s chair, The Stranger might as well remain just that.