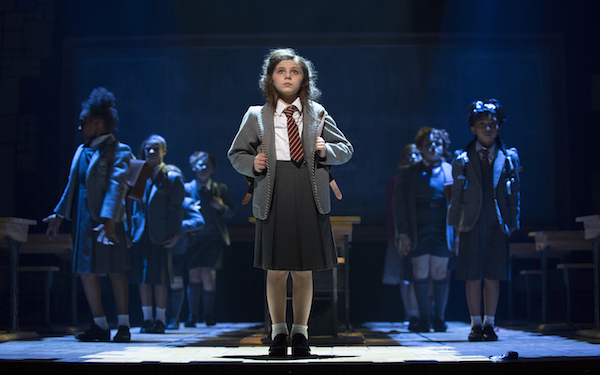 Matilda is playing at the Ahmanson Theatre through July 12th.

There is only one word to describe Matilda the Musical: revolting. It’s a creep, a maggot, a crook, a pathetic little slug. It’s a revolting worm of a play that deserves to be sent to the Chokey!

I jest, of course. Agatha Trunchbull may find the production to be on par with the shriveled part of a balloon’s tail, but what is actually revolting is the thought that thousands of Angelinos haven’t experienced the musical’s utter joy and glorious magic that brought dewy happiness to the eyes of this reviewer. The unadulterated (quite literally) fun of this production is simply too good to miss.

First debuted in Stratford-Upon-Avon, England with music and lyrics by Tim Minchin and book by Dennis Kelly, Matilda won over audiences on London’s West End, then Broadway before making the westward journey to the Ahmanson Theatre, on stage now through July 12. It won a record-breaking seven Olivier Awards, including best musical, and an amazing five Tony Awards in 2013.

Based on Roald Dahl’s 1988 children’s favorite, Matilda tells the story of the title character (played by rotating trio, Gabby Gutierrez, Mia Sinclair Jenness and Mabel Tyler), a precocious young girl with special abilities. She’s a genius for one; she learned Russian just to be able to read works by Dostoyevsky in his native tongue. But what sets Matilda Wormwood apart from her peers is her sense of what is right. She doesn’t take kindly to bullies, even if they are menacingly big like Ms. Trunchbull (Bryce Ryness), the child-hating principal of her new school, or her own preoccupied parents (Cassie Silva and Quinn Mattfeld). Above all else, Matilda wants to bring justice to those who have been stepped on and who don’t have a voice to stand up for themselves.

The musical, though staying true to the book and later film adaptation brought to the big screen by Danny DeVito, sets itself distinctly apart from both prior works. Unlike its predecessors, the story of Matilda in musical form does not focus on her telekinesis ability. It would be a grave injustice if I did not warn you to clear your mind of preconceived notions you may have about the performance. You should not go into it expecting chairs to fly around the room and people to swing from harnesses. Let’s leave that to Peter Pan. This production delves farther into the heart of the story, allowing the audience to connect with the characters better than ever before. It is a deeply original piece that brings nostalgia to the generations of children who grew up with the imagination of Roald Dahl in their bedside library. Munchin’s music is enough to make you dance in your seat, the high-energy choreography in tune with the excitement that infiltrates the entire theatre. The songs are so catchy, I dare you not to YouTube them when you get home.

However, the only way for such a production to come to life in an organic way is to find talent, which is ripe and abundant in this production. The younger actors are amazing to watch. It’s often a worry with child actors that something will spook them. During the opening night production, a noise that sounded like a malfunctioning air conditioner went off in the middle of a pivotal scene. No one so much as flinched. Instead, the show went on and the noise eventually went away.

Don’t let Matilda move out of Los Angeles without witnessing the most triumphant musicals of the past few years. Bring your kids, take your friends, but leave the Trunchbulls in your life at home. There is too much goodness to let anyone spoil it for you.