Transgender Movement: Emerging From the Shadows 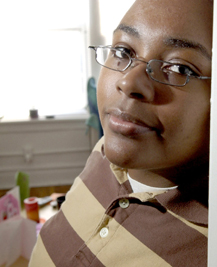 Shawn Coleman bristles when an application poses the question “male or female?” – as if there are only two choices.

When it comes to sexual identity, Shawn – born Patricia – sees a broad spectrum, a man-to-woman or a woman-to-man continuum with many stops along the way. Think gender without borders. He (the preferred pronoun) looks male but not completely. He is not a lesbian, a cross-dresser or contemplating a sex-change operation any time soon.

A graduate student, Coleman is a transgender young adult and at the forefront of a movement that some say represents a new edge of grass-roots activism. Frequently lumped together with gays and lesbians, who have not always been welcoming, transgender people are carving a separate profile and flexing new political clout from campuses to corporations.

Transgender is an umbrella term that refers to people whose sexual identity differs from conventional expectations of what it means to be a man or a woman. It includes transsexuals, who have surgically moved from one sex to another. It includes those who have had electrolysis and take hormones. It also encompasses people like Coleman who identify and express themselves differently from the sex indicated on their birth certificates.

Because of the range of definitions and the stigma, reliable statistics are difficult to find. Pop culture has helped “trans” issues gain more visibility. Felicity Huffman’s performance in TransAmerica grabbed the headlines – and a “best actress” Oscar nomination – but Rent and Breakfast on Pluto included such characters last year as well. On the Sundance Channel, a documentary series called “Transgeneration” followed four college students who morphed from one sex to the other. VH1’s “Surreal Life” also features transgender celebrity Alexis Arquette.

The sports world, too, is seeing more fluidity. There’s Terri O’Connell, a male-to-female transsexual and the only NASCAR driver to compete as both a man (T.J. Hayes) and as a woman. Canadian cyclist Kristen Worley, who also changed from male to female, currently is vying for a spot in the 2008 Olympics. The International Olympic Committee allows transsexual athletes to compete if two years has elapsed since surgery. The NCAA is studying a similar proposal.

More visibility has fostered more understanding. “It used to be that when journalists called, the first question was about surgery,” says Mara Keisling, executive director of the National Center for Transgender Equality, who was born Mark and “transitioned” six years ago. “Now reporters are acknowledging the humanity.”