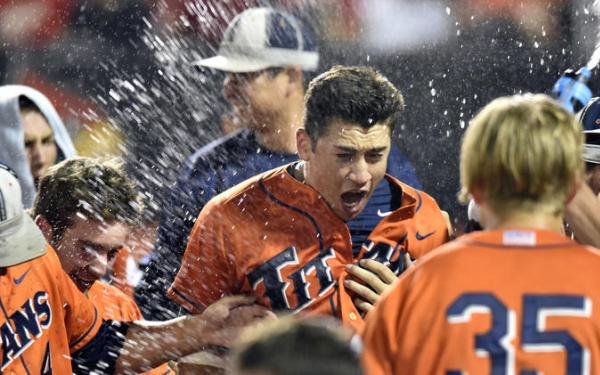 Cal State Fullerton's baseball schedule looked as if it had been concocted by a mad man.

"Like some evil scientist who made a stupid plan that could have killed him," Titans assistant Chad Baum joked this week.

It was, in fact, fourth-year Coach Rick Vanderhook's idea to test an untested team with 25,000 frequent-flyer miles.

Vanderhook put his players in every conceivable time zone, bad-hop and IHOP situation. Got them involved in tough, one-run games in February hoping it would lead to tough, one-run wins in June.

The Titans' spiritual guide teaches "being comfortable being uncomfortable."

"We ran the gantlet," Vanderhook said. "And as stupid as I called myself at the beginning, well …"

Fullerton, to the surprise of three other teams in an NCAA regional and Louisville in a super regional, has advanced to its 17th College World Series in search of its fifth national title.

This is not Fullerton's most talented team. There is no Tim Wallach or Phil Nevin or Mark Kotsay. Chad Cordero is listed on the roster sheet but he's a member of the program's operations staff.

The Titans introduced 16 new position players this year who had to be forged over fire and over time.

The team opened the regular season by losing three of its first four games and dropped seven of nine from March 10-25. A team built on pitching also lost a front-line starter, Justin Garza, to season-ending elbow injury early in May.

The Titans were 22-20 on April 28 when, Vanderhook said, the season turned with a scrappy, 5-3, 12-inning win at USC. Vanderhook didn't see the end because he had been ejected. ("I didn't like the strike zone," he said.)

USC had been 25-0 when leading after seven innings until the Titans tied the score late and won in extra innings.

"Everything changed," Vanderhook said. "The attitude changed. It was them against the world."

Usually a team, at some point, develops an identity. Baum, a former Titans player in his ninth year on the staff, said he noticed something odd about this year's group early in the spring.

"We didn't really didn't have one," he said.

Identity would be formed from lessons learned along a long, lonesome highway. A team either comes to accept bad results or gets tired of it.

"We got tired of it," Baum said. "We made a choice. The hard schedule, getting our butts kicked, the plane rides, it gave us some grit and attitude."

The Titans morphed into a rag-tag collection caught somewhere between baseball's Dead Ball era and the Gashouse Gang.

Fullerton's spine is disproportionally aligned around one power hitter, David Olmedo-Barrera, who has as many home runs, 10, as the rest of the roster combined. That's a ratio comparable to Babe Ruth's sensational first year with the New York Yankees, 1920, when he hit 54 home runs while the rest of the team had 61.

Call Olmedo-Barrera "The Titan of Swat."

Actually, the junior is as shocked as anyone he has developed home-run power since arriving out of La Cañada's St. Francis High. "I hit two home runs in high school," he said.

Olmedo-Barrera matched that total in Monday night's dramatic, 11-inning, win over Louisville in the deciding game in a best-of-three super regional.

The player dubbed "DOB" sent Fullerton to Omaha when he — or did he? — scraped his second home run off the outside of the left-field foul pole. The controversial call was confirmed by NCAA replay officials.

The left-handed batter confessed the homer was powered by Zack Burdi's 95-mph fastball. "He throws plenty hard enough for that ball to go," he said.

Vanderhook refers to his other players as "little rats." They are hackers and grinders. The Titans have won games the last two weekends on a walk-off, bases-loaded walk, and when a batter was hit with the bases loaded.

This is how Titans get it done: They are conditioned to be unfazed and at their best when the other team thinks the game is over.

"We are trained," Olmedo-Barrera explained, "to find a way to be OK with that."

All the razor nicks, knotholes and lessons learned coalesced Monday night at Louisville, in the elimination game, when the Cardinals took a lead into the eighth inning.

Louisville starter Josh Rogers provided a spark when the emotional pitcher taunted the Titans bench after striking out Tanner Pinkston in the seventh.

"He was barking at me," said Baum, the Titans third-base coach.

Baum rushed the field to complain to the umpires as Titans players looked on. "Our guys took offense to it," Baum said. "Someone pointed to our dugout."

Baseball is a superstition-steeped sport where certain acts are deemed to be fate tempting. Baum recalled he said to himself, "Let the baseball gods take that kid where he needs to be taken."

Rogers seemed rattled by the trouble he caused and was pulled after going 2-0 to the first hitter he faced in eighth.

Titans players were more internally motivated by Rogers' gesturing. "At that point we were right where we wanted to be," Olmedo-Barrera said. "They think they have it won."

Trailing by two in the eighth, the Titans worked the bases loaded and, with two outs, Bravo slapped a single through the left side of the infield to tie the score.

Olmedo-Barrera's pole shot in the 11th was the exclamation, but as he noted: "Without Bravo my home run was nothing."

The road-warrior Titans did not return home after the win, moving directly from Louisville to Omaha.

This team is used to late check-ins and early check-outs. The Titans go West to East as well as they do top to bottom.

Vanderhook pondered it all as he perused sections of his lineup card:

•Pinkston, first base: "Really settled the defense down."

•Catcher A.J. Kennedy: "Persistent, a Jeff Mathis at our level."

Vanderhook just laughed when asked about ace Thomas Eshelman, who had a win and a save against Louisville.

"Remarkable," Vanderhook said of the pitcher who owns a 1.58 ERA while walking only seven batters in 131 1/3 innings.

And what of unconventional "closer" Tyler Peitzmeier, who recently pitched five shutout innings of relief against Arizona State and five more innings Monday against Louisville?

Vanderhook said he went to visit Peitzmeier on the mound during the Titans' grueling, 14-inning regional game against Arizona State and Peitzmeier chirped: "What are you doing here? Go back to the dugout."

The Titans expect to hear, "What are you doing here?" the second they touch wheels down in Omaha. It ties in nicely to the theme of the season.

And while Louisville was thrilling and dramatic, the Titans are back in lock-down mode preparing for Vanderbilt as if they're already down two runs.

Celebrations are nice, but it's time to get uncomfortable again.