$10,000 reward offered in case of music producer who vanished in Compton 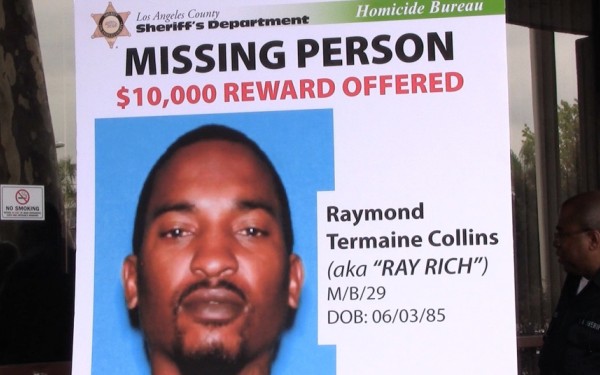 Raymond Termaine Collins’ family is asking for the community’s help in finding out what happened to the music producer, who vanished after a meeting in Compton in February.

At a news conference Thursday afternoon on the steps of Compton City Hall, Mayor Aja Brown promised a $10,000 reward for any information to help solve the mystery.

Authorities believe foul play may have been involved because all of Collins’ bank, phone and social media activity stopped the day he disappeared.

“My son is one that is always on his computer. Facebook, everything, that’s how he does his business, that’s how he communicates with people. But everything went silent on that day,” his mother, Annie Collins, said Thursday.

“So I speak to the city of Compton and to everyone that is out there listening. I pray that you will do the right thing,” she said. “If you know anything, please come forward. Do the right thing.”

Collins, 29, grew up in Compton but lived with his family in Chino. He often returned to South L.A. to help friends make music videos.

On Feb. 15, the day before he disappeared, Collins headed down to Compton to meet a friend, a rapper known as Big Man, to discuss making a music video, authorities said.

The rapper told investigators that Collins dropped him off the next morning about 2 a.m. at the corner of Alondra Boulevard and Dwight Avenue. About an hour later, witnesses observed a black man get out of Collins’ car, a dark gray Toyota Camry, in a different part of town.

Collins has not been heard from since. He is described as 5 feet, 11 inches, 160 pounds with brown hair, brown eyes, a mustache and goatee. He has the word “Blessed” tattooed on the left side of his neck, “Ray” on his right knuckles and “Rich” on his left knuckles. “Annie” is tattooed on his left forearm.

“He’s a loving son. He loves his family and he is always going to call and check in. He would never do this. Four months? No,” Collins’ mother told The Times. “My son grew up in Compton. He was never in gangs. We kept him away from that.”

Collins' father, also named Raymond Collins, said the family realized something was amiss when no one had heard from him for a few days, not even his siblings.