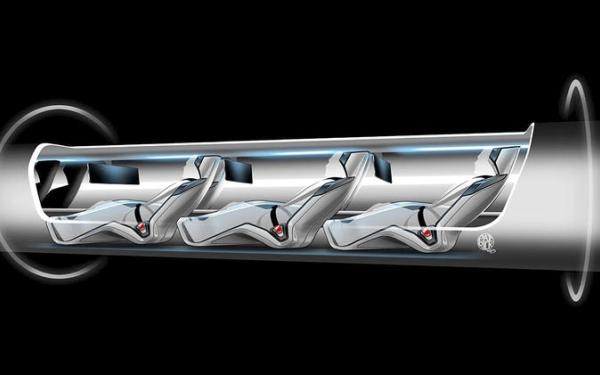 An image released by Tesla Motors shows a sketch of the Hyperloop design with passengers.
(Credit: Tesla Motors)

The competition, slated for June 2016, is geared toward student-led teams from universities and independent engineering teams, according to documents obtained by the Los Angeles Times.

“While we are not developing a commercial Hyperloop ourselves, we are interested in helping accelerate development of a functional Hyperloop prototype,” the company says on its competition website.

SpaceX said it would build a 1-mile test track next to its headquarters, outside LA in Hawthorne, to be used during the competition and would also likely construct a demonstration pod not eligible to win.

No people will ride in any pod during the event. SpaceX said the competition is open to anyone in the world.

Musk released the design for the Hyperloop in August 2013 in an open-source document. The imaginary transportation system would use vacuum tubes to transport freight and passengers between Los Angeles and San Francisco at up to 760 mph. Travel time was estimated at 30 minutes.

In the August document, Musk said the idea stemmed from his disappointment with the California bullet train proposal.

“How could it be that the home of Silicon Valley and JPL … would build a bullet train that is both one of the most expensive per mile and one of the slowest in the world?” Musk said in the Hyperloop design plan, referencing the federally funded Jet Propulsion Laboratory. “If we are to make a massive investment in a new transportation system, then the return should by rights be equally massive.”

More details about the competition will be released in August, according to the documents.

Teams must sign up in September and send a final design package by December.

In January, SpaceX will host a design weekend at Texas A&M University where teams can present their idea before a panel composed mainly of engineers from SpaceX and Tesla Motors, as well as university professors.

There’s also a corporate aspect to this weekend — SpaceX said companies can connect with teams they would want to sponsor, meaning they would contribute funds toward pod construction costs.