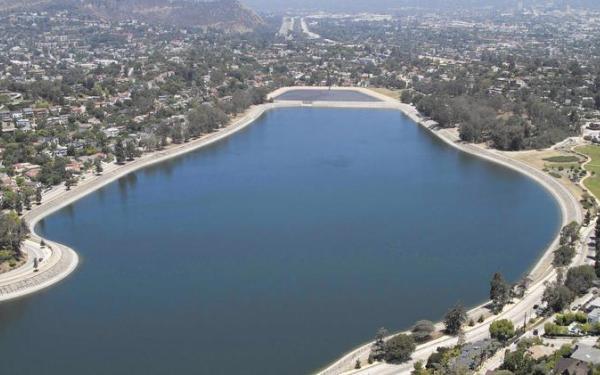 The Silver Lake Reservoir is about to go dry.

The reservoir will be temporarily drained this summer as part of a Los Angeles Department of Water and Power project to build a new water pipeline beneath it.

After more than a century of service, the Silver Lake Reservoir — the scenic centerpiece of the hilly neighborhood — was disconnected in December 2013 from the city's drinking-water system as part of a federal mandate to phase out open-air drinking-water reservoirs.

The lost drinking-water storage is being replaced by a new underground reservoir near Griffith Park called Headworks.

When will the Silver Lake Reservoir be drained?

Crews will begin draining it toward the end of June or beginning of July, Rowghani said. It will take several weeks for the reservoir to empty and be dry enough to start construction on the new pipeline.

How long will it be empty?

Why is this happening?

The Silver Lake Reservoir, and the smaller Ivanhoe Reservoir next to it, have long stored drinking water from the Los Angeles Aqueduct, the Metropolitan Water District of Southern California and groundwater sources. But the treated water was exposed to contamination from surface runoff, pollution from animals and people, and a sunlight-triggered reaction that created a carcinogen.

The DWP anticipates the Ivanhoe Reservoir being permanently removed from the city's drinking-water distribution system later this year.

Where will all that water go?

"The preciousness of water is highlighted by the drought," Rowghani said. Portable units will treat the water at the Silver Lake Reservoir and put it back into the city's drinking-water system.

There are about 400 million gallons of water in the reservoir, Rowghani said. Though at full capacity it holds nearly 800 million gallons, the department has not been refilling water lost to evaporation in recent months.

Will the walking path around the reservoir remain open during construction?

Where will all the construction equipment go?

The empty reservoir will be used as a staging area while the pipeline is being built, according to the DWP. Trucks will be parked in the reservoir, and construction equipment will be stored there to keep city streets clear and reduce truck trips, Rowghani said.

Will the reservoir be refilled?

The reservoir will be refilled with nonpotable water, the DWP says. The department says it is meeting with community groups and residents to discuss the future of the area surrounding the reservoirs. The DWP will retain jurisdiction of them because there will still be functioning dams on site.

When was the last time the reservoir was drained?

The Silver Lake and Ivanhoe reservoirs were drained in 2008 because the water was contaminated with bromate, a carcinogen that formed when sunlight mixed with chlorine and naturally occurring bromides.

The DWP dumped hundreds of thousands of floating black polyethylene balls into the Ivanhoe Reservoir to protect the water from the sunlight-triggered reaction. (The Silver Lake Reservoir did not get shade balls after it was refilled because its replenished water supply was not chlorinated until after it left the basin.)

The drained Silver Lake Reservoir revealed hundreds of golf balls, clothing and a gold wedding ring. As will be the case this summer, the draining of the reservoirs in 2008 came amid a drought.