Drinks are on the House: When You Build Your Own Bar 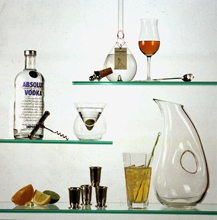 Perhaps you need a break from the typical nightlife scene and want to bring the soiree closer to home. Spend the day creating a home bar that goes beyond a case of beer and a bottle opener.

To get you started, here are tips from Larry VanDenEng, a bartender and instructor at the Bartending College in Milwaukee; and Bill Thornton, founder of BarNinja.com.

Tools: “You can turn any table or any countertop into a nice bar instantaneously with $30 to $40” in bar tools, Thornton says. He recommends people start with two bar mats, two large tins (also called shakers or tumblers), two small “cheater” tins and two strainers. “From there, you can make any drink you’ve ever seen made on television or at your favorite bar.”

Basics: Most drinks include the standards: vodka, rum, gin, tequila and triple sec. Possible others liquors to have on hand might be bourbon, whiskey and scotch. “You’ll be able to pour drinks for a buddy or your boss and anyone in between,” Thornton says.

Mixers: Equally important as the liquors are the non-alcoholic drinks blended with them to make cocktails, the experts say. For juices, get lime, orange, cranberry, pineapple and grapefruit. Soft drinks to buy are Coke (regular and diet), tonic water, soda water, ginger ale, Sprite and 7UP.

To save time with other popular concoctions, pick up pre-made Bloody Mary, sour and margarita mixes. Steer clear of subbing in non-brand colas and lemon-lime sodas, because that can change the taste of many drinks. “A Rum and Pepsi is just not the same as a Rum and Coke,” Thornton says.

Beer and wine: For beers, have an ale, a hard cider, a lager and a stout, Thornton says. A bar’s wine collection should include Zinfandel, Chardonnay, Cabernet and Merlot. “And it never hurts to have a nice inexpensive bottle or two of champagne for mimosas or impromptu celebrations,” he adds. Remember: Stock up on ice when planning to entertain, Thornton says. “You may think you have the world’s greatest ice maker, but you usually find out you don’t when you need to make drinks.”