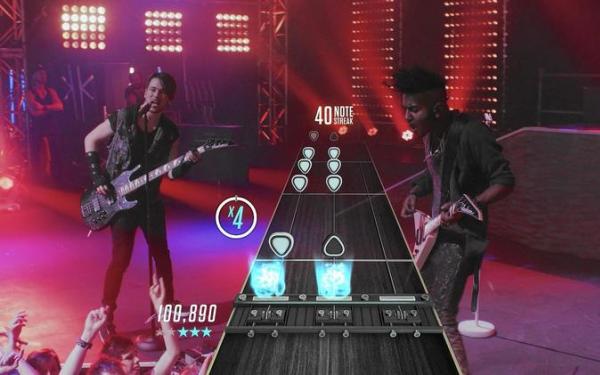 “Guitar Hero Live” will be different from the original game in the way it looks and how it is played.
(Credit: Freestyle Games/Activision)

LOS ANGELES — Like rock ‘n’ rollers getting the band back together, Activision and Harmonix are resurrecting their music-based franchises “Guitar Hero” and “Rock Band,” titles that in 2008 at their peak generated more than $1.6 billion in North American sales.

The two games, “Guitar Hero Live” and “Rock Band 4,” are hoping to make some noise at this year’s Electronic Entertainment Expo (E3), North America’s largest video game trade show, held this week at the Los Angeles Convention Center. The two games arrive in stores this fall, bringing with them an army of plastic guitars and a more modernized feature set.

They come to E3 as something of underdogs. Essentially absent from the marketplace for the last five years, the titles were once giants of the industry and heralded as a way to bring non-gamers into the gamer fold.

“They were very clearly fads, both of them,” says Michael Pachter, an analyst at Wedbush Securities.

“Clearly they kind of grew because of some frenzy,” he continues. “Everyone was talking about them all at once. Other than perhaps, ‘Angry Birds’ or ‘Candy Crush,’ I’ve never seen any game franchise that attracted more women than ‘Guitar Hero.’ They resonated with consumers and grew way beyond what anybody ever expected.”

This time around, “Rock Band” will emphasize player creativity, even allowing amateur rock stars to more or less rewrite guitar solos. “Guitar Hero,” for its part, taps into our 24/7, on-demand music culture.

Neither is a sure thing a second time around.

“The developers and publishers kind of need to treat this genre as if it’s a new opportunity,” says Lewis Ward, an industry analyst with IDC. “They can’t take anything for granted and need to walk before they try to run.”

They’ll also have to bank on consumers forgetting that both series, once insta-hits, crashed and burned. “Guitar Hero” was essentially left for dead in early 2011 when Activision said it would scrap a planned “Guitar Hero” title for that year. “Rock Band 4” will be the first title in the core series since 2010’s “Rock Band 3.”

What led to the decline of the dueling “Rock Band” and “Guitar Hero” franchises that once led the headlines? Most analysts blame too many sequels, including “Guitar Hero” titles that were themed to individual acts such as Metallica and Aerosmith, coupled with pricey plastic gear amid a declining economy.

Pachter argues that consumers had no reason to buy more than one title, noting most only played their favorite songs and weren’t interested in shelling out the cash for another game. Still, he’s optimistic about what he has seen — and is hearing — from developers regarding the newest releases.

“A $2 billion fad that has been kind of shelved for five years can grow to a $200 or $400 million fad now,” he says. “I think both developers are conscious that they probably oversaturated last time, and they can be a bit more deliberate this time and not destroy the market by oversaturating.”

Developers say they have learned from past mistakes. “Rock Band 3,” for instance, tried to add complexity by allowing for use of real instruments. With “Rock Band 4,” Harmonix is going out of its way to ensure players can use their old plastic instruments.

“We went in a direction for ‘Rock Band 3’ that’s been described as a bit of a sprawl,” says Greg Lopiccolo, creative lead on “Rock Band 4.” “It had new instruments. It tried to teach you how to play real instruments. I’m proud of that, but we learned that’s not what most people wanted out of ‘Rock Band.’ People wanted to party with their friends, and that’s our mission in life.”

Likewise, Activision says it won’t repeat past mistakes. For one, the company has pledged to not release an updated title in 2016. Much of the focus this time around will be not on downloadable content but, instead, on 24/7 streaming music video channels, allowing players to dive into a heavy metal show on one station or flip channels and play along to pop videos on another.

Videos will be available for purchase (prices have not been set), but that’s not the core of the game, as players will have the freedom to pick and play songs at will by competing with others among the so-called GHTV stations. New songs can be added daily, and “Guitar Hero Live” hopes to work with artists and labels to unveil exclusive live clips, playable after unlocking a series of challenges.

In turn, Activision has, essentially, revamped “Guitar Hero” from the ground up, so much so that the digital avatars and rainbow-colored animations that marked the rhythm-based series’ rise to prominence in the mid- to late 2000s are wiped from memory.

The game will include new guitars, meaning if you have any old ones collecting dust they’re not playable. In solo play, the game will rely heavily on filmed sequences that are shown from a first-person perspective.

That awkward “Guitar Hero” moment when a band’s digital avatar was seen shaking and singing along to songs from a different genre? That won’t happen this time around. Instead, players will join live-action fictional bands, with audience members cheering or booing based on a player’s skill.

“The whole first-person thing is about you putting yourself in those shows,” Jackson says. “We’ve got all-girl bands. We’ve got a really wide variety. It doesn’t matter if you’re a boy or girl playing. It’s you.”

Harmonix said it learned from last year’s “Fantasia,” an Xbox One exclusive that allowed players to, essentially, remix songs, striking the vocals from one track or adding brass to another. In turn, Harmonix wanted players to have more freedom in “Rock Band 4,” whether that’s “improvising harmonies on the fly” or creating more expressive guitar solos.

“It’s not one big thing. It’s a whole set of little things that makes the experience of collaborating with your friends ... more immersive and more empowering,” Lopiccolo says.

There’s still one major hurdle each title will face this fall: They’re pricey little endeavors. “Guitar Hero Live” is listed by retailers at $99, and a guitar bundle of “Rock Band 4” is currently set at $129.99. Then, there’s the cost of a device to play on.

Perhaps each title’s biggest advantage is that it can appeal to those who don’t ever remember playing a “Guitar Hero” or a “Rock Band” in the first place.

“The good news is we have a whole generation of people who haven’t played it, pretty much anybody who is under 15 didn’t play it last cycle,” Pachter says. “That’s an opportunity.”