Balcony collapse in Berkeley kills 5 Irish college students, one other 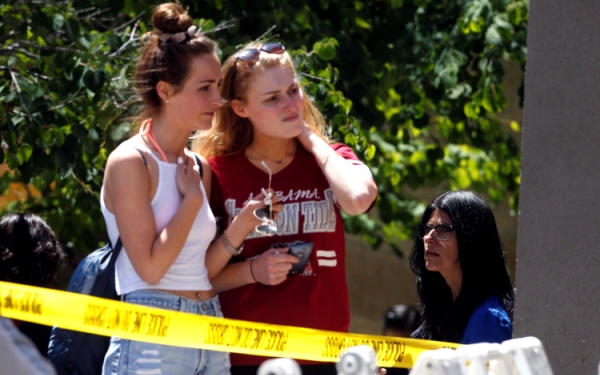 BERKELEY, Calif. — The Biswas family was trying to sleep, but the group partying on the balcony a floor above them was too loud.

At 12:42 a.m. Tuesday, they heard a crack and the building shuddered. Silvia Biswas jumped out of bed thinking an earthquake had struck and the apartments were about to collapse.

When she looked out the window, she saw people lying on the ground. No one was screaming. The street was silent.

She thought they might be acting, until she and her teenage son, Jason, went downstairs. They discovered dead and grievously injured victims around the sidewalk and curb, lying amid bits of stucco and red party cups.

“There were about 12 bodies on the ground and one girl was on the curb,” Jason said. “One guy was walking around, but he was bleeding a lot. He looked like he had punctured his lung.”

Six people died and seven were injured when the balcony collapsed and sent them plummeting 40 feet to the ground.

The victims were largely students from Ireland working in the Bay Area for the summer. They were celebrating a woman’s 21st birthday.

“This is every parent’s worst nightmare to wake up to an appalling tragedy far away, and indeed, there are thousands of Irish students working abroad over the summer months from our universities and colleges,” Charlie Flanagan, Ireland’s minister for foreign affairs, told Irish broadcaster RTE.

Officials in the city, named after the Irish philospher George Berkeley, would not comment on what might have caused the collapse, but three engineers who visited the site on their own said there were clear signs that dry rot had eaten away at the wooden joists holding up the balcony.

“It was decayed,” said Darrick Hom, president of the Structural Engineers Association of Northern California, noting that inspectors were “touching it with their hand and pieces were coming off.”

“Obviously, if you touch a wood beam on your deck, it should not come off in your hand,” he said.

Five of the dead were Irish: Oliva Burke, 21; Eoghan Culligan, 21; Niccolai Schuster, 21; Lorcan Miller, 21; and Eimear Walsh, 21. All were in California working under J-1 visas, which allow university students to hold jobs in the United States for up to four months.

“There isn’t a family in Ireland whose children haven’t come over on that program,” Philip Grant, the Irish Consul General in San Francisco, said at a news conference in Berkeley. “This is normally a life-forming experience. It is deeply, deeply tragic and it touches every single family in Ireland.”

Grant said many of dead and injured attended Trinity College and University College Dublin. He said their families would begin arriving at local hospitals Tuesday night.

Police received complaints about a noisy party at the Library Gardens apartment on Kittredge Street about 12:02 a.m., but officers did not respond because of a report of gunfire in South Berkeley, police Chief Michael Meehan said.

When 911 calls about the collapse came in, officers were there within two minutes.

At least eight ambulances along with multiple fire engines also responded, according to 911 recordings.

The apartment where the party had taken place was empty when authorities arrived, according to firefighters heard on the recordings. Silvia Biswas, 38, said there was no noise in the unit after the crash. The crack she had heard was the 5th-floor balcony crashing onto her next-door neighbor’s balcony, which is attached to her bedrooom wall.

Mark Neville, an Irish student who lives on the ground floor of the building, told the local NBC station that his hometown in Longford County was in shock.

“My parents are personally in state of panic,” he said. “My dad said it was worst hour and half of his life just waiting for the call back saying I’m safe.”

City officials red-tagged three other balconies at the Library Gardens, a 177-unit complex that opened in 2007. Engineers inspected the damage to determine what caused the collapse.

“It appears to be a classic case of dry rot, meaning water intruded into the building, rotted the wood” that held up the deck, said Gene St. Onge, a civil and structural engineer in Oakland who visited the site but is not part of the investigation.

This balcony — built under current codes — should easily be able to support 13 people.

“If you had 14 people, and they were all — I don’t know — football players, and they were jumping up and down, you would get a fair amount of deflection,” he said. “But if the (wooden supports) were designed even under minimal standards, it should still have held.”

Bernard Cuzzillo, a consulting engineer who has a doctorate in mechanical engineering from UC Berkeley, said there was visible mold in one of the broken wooden joists. And it broke into short fibers at the failure point, a sign of dry rot. If the wood had not rotted, “you would see long slender splinters,” he said. “It would look like a broken baseball bat.”

He said the joists looked to be so compromised that that much of them appeared to disintegrate during the collapse.

In February, Berkeley city officials reported “potential” safety violations at the apartment complex, though none related to the balconies, city records show.

Staircase lights didn’t work, signs were missing, handrails were loose and a fire extinguisher had expired, according to an inspector from the city’s building code enforcement office. The problems remained unfixed despite a previous inspection and warning letter, the document shows, but were not elevated to the level of a “cited housing violation.”

The violation notice accompanied a thick sheaf of complaints alleging poor maintenance by a tenant who has lived there since 2009.

“I know these issues are important and I am being punished for raising them,” she said. “But obviously something is not safe here and as a result, six people died, six young people.”

She received a letter on April 29 from the law firm that represents Library Gardens, dismissing her complaints and requests to contact the company’s upper management.

The owner of the land is listed as Granite Library Gardens, an investment fund managed by New York-based BlackRock. BlackRock leases the property to Greystar, a Virginia company that owns more than 400,000 residences nationwide.

Greystar did not return calls for comment, but issued a statement expressing condolences.

“Our hearts go out to the families and friends of the deceased and those injured in this tragic accident,” the statement said. “We have taken precautionary steps to limit access to other balconies at the apartment complex as law enforcement completes its investigation.”

“They were the sweetest people in the world,” said Celeste Thomas, 27. “They were so nice. I just spoke to them three days ago. It stings just that much more when you just saw the person.”

She said that police rarely answer noise complaints. “If they have responded to that first noise complaint those people would still be alive,” she said.

“Today has probably been the most difficult time in the history of the consulate on the West Coast,” Grant told reporters. “Our thoughts and our prayers are with the families of those who tragically lost their lives last night.”