Damaging trans fat to be banished from U.S. diet 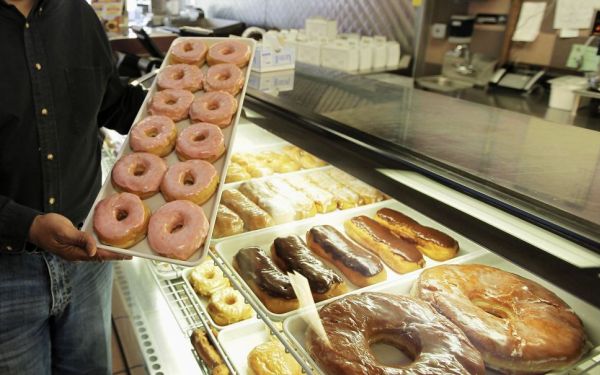 Trans fat will be almost entirely removed from the American food supply over the next three years, after the U.S. Food and Drug Administration on Tuesday finalized plans to ban the heart-damaging additive.

Now food manufacturers have three years to eliminate it from most of their products.

The ban is ultimately a move in the right direction, but it’s arguably too late to be of much use to consumers, said nutritionists and public health experts. Pressured by consumer advocacy groups and mounting public criticism of trans fat, most U.S. food manufacturers already have stopped using it. And several places — including California — banned the additive in restaurants and bakeries years ago.

“It’s a really good thing they did. It was just a long time coming,” said Dr. Eleanor Levin, a cardiologist with Kaiser Permanente Santa Clara.

Trans fat, which often appears on food ingredient lists as partially hydrogenated oil, is made from a manufacturing process in which hydrogen is added to oil to make it solid. Research has linked trans fat to a variety of health problems, but most directly to worsening cholesterol levels.

The FDA first expressed concerns over trans fat in 1999, and in 2006, it began requiring manufacturers to clearly label trans fat levels on their products. That policy led to a rapid and dramatic drop in the amount of trans fat found in processed foods, and consumption fell about 78 percent from 2003 to 2012 in the United States.

The new policy will exempt naturally occurring trans fat, which can be found in some meat and dairy products. And food manufacturers can apply for exemptions for some products.

In its announcement Tuesday, the FDA said this final push to ban trans fat will lower heart disease rates in the country and prevent “thousands” of heart attacks each year. Food manufacturers said the three-year timeline will give them time to remove trans fat from their products without causing major production disruptions.

Although the use of trans fat in American foods has been waning, it’s remained a stubborn presence, public health experts said. The FDA’s label requirements allowed manufacturers to include up to half a gram of trans fat per serving without noting it on the label.

That meant a product with multiple servings — a box of cookies or crackers, for example — could conceivably contain several grams of trans fat but proclaim zero grams on the label. Consumers could be sure they were avoiding the additive only by carefully reading ingredient lists.

Last year, a study by the U.S. Centers for Disease Control and Prevention found that 1 in 10 processed foods sold in the United States contained trans fat, but most of those products had low enough levels that they weren’t labeled as such.

With the new ban, consumers won’t have to scrutinize every ingredient list to make sure their food is trans-fat-free.

“This finishes off the legislation (the FDA) had already done. It closes that loophole,” said Dan Henroid, a registered dietitian and director of nutrition and food services at UCSF Medical Center.

But nutritionists also cautioned that trans fat is hardly the only food ingredient that consumers should avoid. And they worried that the ban, while necessary, would give people a false sense of confidence in the safety of their food.

Henroid suggested that consumers focus on a “local and slow” — as in, not “fast” or processed food — diet that includes whole, unprocessed foods, which not only won’t contain manufactured trans fat but will be low in other unhealthy components.

Consumers should still watch their intake of saturated fats and added sugars, for example, said Katie Ferraro, a registered dietitian and assistant clinical professor at the UCSF School of Nursing. And those ingredients aren’t always easy to spot on food labels.

“Removing trans fat is a step in the right direction. But we’re ignoring the elephant in the room, which is saturated fat” and added sugars, Ferraro said.

“Sometimes over-focusing on one nutrient detracts us from the message that foods are a combination of hundreds or thousands of compounds,” Ferraro added. “There’s no one nutrient that is inherently evil. Your health is a reflection of a combination of things you eat. But that’s not something you can put into a piece of legislation.”