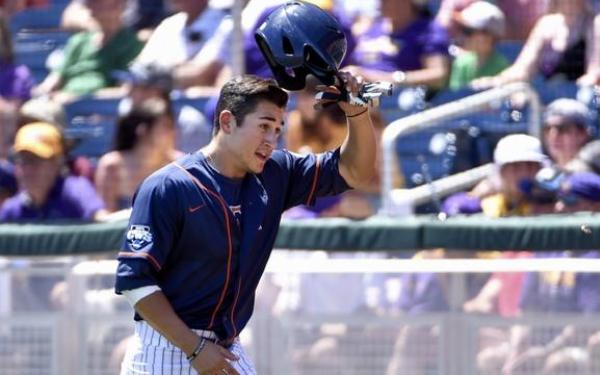 David Olmedo-Barrera had plenty of big hits throughout the regular season for the Cal State Fullerton baseball team. It carried over to the playoffs, with Olmedo-Barrera supplying power and helping the Titans make their first NCAA College World Series appearance since 2009.

It turned out the stay at the prestigious double-elimination event was short for Olmedo-Barrera, a 2011 St. Francis High graduate, and Fullerton.

For the second straight game, Fullerton couldn’t hold on to a three-run lead and saw its season wrap up Tuesday with a 5-3 defeat against LSU at TD Ameritrade Park in Omaha, Neb.

Olmedo-Barrera, a former All-Mission League and All-Area selection, finished the tournament with two hits in eight plate appearances. The designated hitter had one hit Tuesday and one in a heart-breaking 4-3 defeat against defending champion Vanderbilt on Monday.

Fullerton, which advanced to the World Series after knocking off Louisville in a best-of-three Super Regional, entered the World Series with a 25-0 record when building a three-run lead. Unfortunately for the Titans, they weren’t able to protect a pair of 3-0 advantages in either World Series contest.

Olmedo-Barrera, who was drafted June 10 in the 12th round (358th overall) by the Tampa Bay Rays, and the Titans got off to an excellent start Tuesday. The Titans scored three runs in the bottom of the first inning with Olmedo-Barrera playing a large role. He had a run-scoring triple with one out to give the Titans a 1-0 lead. Olmedo-Barrera then scored on a single by Jerrod Bravo to make it 2-0.

LSU starting pitcher Alex Lange settled down after a shaky first inning and limited the Titans to two hits the rest of the way in a complete-game effort to turn back Fullerton. Olmedo-Barrera poppied up to short in the third, flied out to left in the fifth and struck out in the eighth.

On Monday, Fullerton looked in command in its opening-round contest against powerful Vanderbilt. The game originally began Sunday night and Fullerton held a 3-0 advantage in the bottom of the sixth before the game was suspended because of rain and lightning. After the contest resumed Monday, Vanderbilt scored a run in the sixth to trim the deficit to 3-1. Vanderbilt then scored three runs in the bottom of the ninth, capped by a game-winning two-run home to right by Jeren Kendall.

Olmedo-Barrera had a double to right in the sixth for the Titans, who made their 17th trip to the World Series.

It proved to be quite a season for Olmedo-Barrera and the Titans (39-25). Olmedo-Barrera hit a game-winning solo home run to left — a play that went to instant replay and was reviewed for more than five minutes — in the top of the 11th to give the Titans a 4-3 win against Louisville in the third and deciding game of the Super Regional. He batted .636 ((seven for 11) with two RBI and five runs scored.