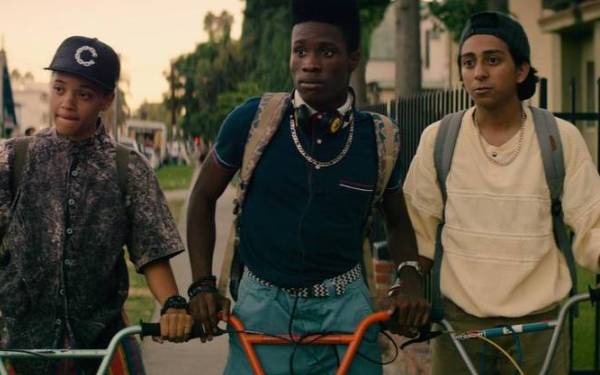 The word “dope” has multiple meanings: a drug, an idiot or being cool. It’s the perfect word to describe the new feature film from Rick Famuyiwa because “Dope” deals with some drug issues, has a few characters who do stupid things but is a very cool.

What makes the movie so appealing is that Famuyiwa has made “Dope” a blend of “Boys n the Hood” and “Revenge of the Nerds” set in Inglewood (making this “Boyz n the Wood”). It deals with some serious issues about growing up while balancing the goofy antics of the three nerds at the center of the story.

Malcolm (Shameik Moore) is in the middle of a neighborhood where some residents hope for a better day while others are resigned to a life with little hope. All Malcolm and his two friends and band mates — Jib (Tony Revolori) and Diggy (Kiersey Clemons) — want to do is stay out of trouble and get into a good college.

The odds of both happening go down when the trio get pulled into the drug world. Their only option is to survive that world until they can find a way out and put their life plans back on track.

That’s the heavy dope side of the movie. But Famuyiwa keeps this from becoming the latest serious examination of the lives of young people through a hilarious hip-hop approach.

Each time the story begins to get bogged down in the pain of reality, the director/writer cranks up the comedy. Sometimes it comes from within the trio of friends, such as Malcolm’s obsession with ’80s music. It also comes from supporting players like Chanel Iman as a drug-happy temptress who becomes an online sensation or Blake Anderson (“Workaholics”), who plays a friend of the group that can’t understand why he isn’t allowed to use the n-word.

The film’s filled with quirky players who come in and out of the lives of the three friends. Because the focus keeps coming back to them, how entertaining “Dope” is depends on their work.

This is the first feature film role for Moore and he delivers a performance that is sweet, smart, naive and — when needed — tough. His performance comes across as strong as many veteran actors.

Revolori — who was so good in “The Grand Budapest Hotel” — is redefining the sidekick role. He’s not only in the film to toss in the occasional quip, but he plays his character with enough depth that he could have been the focus of the movie.

Clemons doesn’t get as many good scenes as the other two, but she makes the most of the moments she gets.

All three of them play characters who fit the contradictory design of “Dope.” This is a movie about contrasts and blowing up stereotypes. Even the plot line is a contrast of the seriousness of growing up in a tough neighborhood with the silliness of high-school life.

Even having Forest Whitaker — one of the producers of the film — provide the narration creates a sense of importance in the film that at it’s heart is fun and funny.

“Dope” is the biggest surprise of the film year — from the standout work by its novice star to a story that has more twists than the dancers in a rap video. You’d be a dope not to see the dope “Dope.”