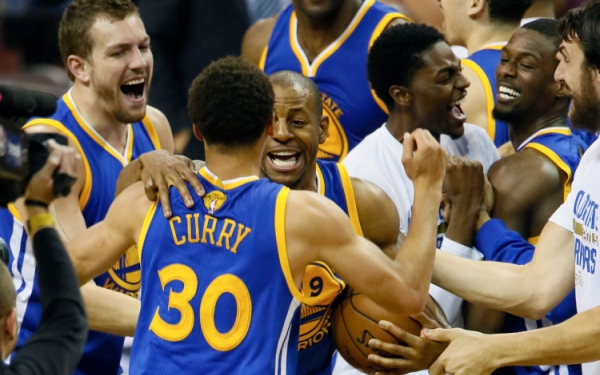 The Golden State Warriors' Stephen Curry (30) celebrates with teammate Andre Iguodala (9) and the rest of the team after time ran out during the fourth quarter.
(Credit: Ed Suba Jr./Akron Beacon Journal/TNS)

CLEVELAND — In the end, the Warriors left no doubt.

The Warriors, a complete and consistent team experiencing a dream season, crushed the Cleveland Cavaliers on Tuesday with a methodical 105-97 win in Game 6 of the NBA Finals and found themselves at the pinnacle celebrating a new title.

These Warriors can now be called NBA champions.

Golden State captured its first championship trophy since 1975, using the formula it had relied upon all season long. With the leadership and historic shooting of Stephen Curry and contributions from up and down their roster, the Warriors dazzled teams with the highest-scoring offense. With smarts and toughness, they banded together to form a swarming, top-ranked defense.

LeBron James, despite averaging 35.8 points per game in the series for the injury-plagued Cavaliers after a 32-point night at Quicken Loans Arena, was no match for such a team as Cleveland’s 51-year major professional sports championship drought continues.

Curry, who toiled for years and turned around a losing culture, led the Warriors with 25 points and threw the ball toward the heavens as the final seconds ticked away.

“This group is a special group,” Curry said.

“This is just what it’s all about.” Finals MVP Andre Iguodala, whose insertion in the starting lineup turned around the series, also had 25. Draymond Green, whose indomitable spirit propelled the team, notched a triple-double with 16 points, 11 rebounds and 10 assists.

Even on a night when sidekick Klay Thompson was held to five points and fouled out, the Warriors could not be stopped and showed just how well-rounded the Warriors were.

“We’ve got a team full of believers,” Iguodala said.

The Warriors clinched the championship with a decisive victory much like the ones they had all through a 67-win regular season.

The Warriors dominated the first quarter and led 28-15, with Iguodala once again starting in the Warriors’ small lineup and serving as the sparkplug.

This time, the Cavaliers kept Timofey Mozgov in the game to guard Iguodala, who missed his first three attempts with the 7-foot-1 center daring him to shoot before finding his rhythm.

Iguodala hit three of his next four jump shots, including a 3-pointer that started an 8-0 run to finish the quarter. Festus Ezeli had a dunk, and Harrison Barnes was good from long distance to put the Cavaliers’ backs against the wall.

The Cavaliers committed a whopping nine turnovers in the quarter, including three shot-clock violations in the first eight minutes as the Warriors made them pay for attempting to slow down the pace of the game.

When James Jones hit three free throws and James then beat the shot clock with a 3-pointer to start the second quarter, Leandro Barbosa responded with a shot from beyond the arc of his own.

James, who started the game 2-for-6 from the field while being guarded by Iguodala, kept coming. He hit a 3-pointer to start an 8-2 run that cut the Warriors’ lead to 45-43 at halftime.

The Warriors gave major minutes to Shaun Livingston after Iguodala committed his third foul, as he took on the defensive assignment against James. Barbosa also played as much in the first half as Klay Thompson, who committed three fouls in 10 minutes.

As Mozgov protected the paint and Green battled him inside, the Warriors had difficulty scoring inside. They started missing jump shots too with Thompson out of the game and were 6-for-22 from the field in the quarter. The Cavaliers crawled back into the game by dominating the glass and causing foul trouble.

James had 15 points and eight rebounds, Tristan Thompson had 11 points and seven rebounds and Mozgov had seven point and nine rebounds by halftime.

Mozgov and Tristan Thompson scored consecutive baskets to start the third and give the Cavaliers the lead briefly, but Barnes hit his third 3-pointer of the game to put the Warriors back on top. Iguodala had a dunk, and Green hit a 3-pointer to give the Warriors a 53-47 lead.

The Warriors ran away from the Cavaliers, pushing the ball in transition off missed shots and turnovers. Livingston scored on a layup after catching an outlet pass from Green. Then Curry himself grabbed a rebound and sprinted the other way before feeding Iguodala for a dunk that made it 61-51.

Festus Ezeli, who got the minutes over center Andrew Bogut, completed an alley-oop dunk and then threw down a vicious put-back for a 3-point play that pushed the lead to 14 points.

Two more free throws made it seven straight Warriors points for Ezeli, who didn’t play all last season due to injury but found himself in a championship-clinching role.

Green scored inside again and flexed as the Warriors led 73-58. The Warriors entered the game 57-0 when leading by at least 15 points, and there was never a chance they would ever let there be a blemish to that mark.

The Cavaliers scored seven straight points in the fourth to cut the lead to seven, but there was Curry hitting a 3-pointer to push them back.

After J.R. Smith hit a 3-pointer, Iguodala responded with one of his own as well to make it a 10-point game again. Curry struck again from long distance to make it 86-75.