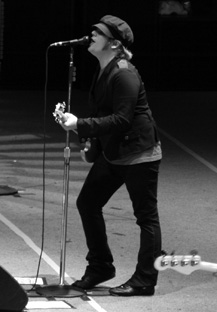 Whether you love them or you hate them, Fall Out Boy has an undeniable charm that makes them stand out from the masses of pop-punk bands today. The somewhat dark and smart ass humor of its song titles, full of pop culture references and plays on words, perfectly foretell the band’s live show demeanor.

At times barely even playing their instruments, bassist Pete Wentz and guitarist Joseph Trohman galloped across the stage, jumped from the drum set, tossed guitar picks and spun around in circles like children trying to get dizzy in the middle of their living room. Though they missed more than a few notes, die hard fans didn’t seem to notice or care. But who really needs musicianship when you’ve got showmanship and an obscene amount of personality?

Singer Patrick Stump’s relatively dull and shy stage presence, recoiling to the back of the stage immediately once songs ended, nonetheless was the foundation and vital organ of band’s sound. Without his conservative behavior, always standing stationary and tapping his right foot, songs would have been unrecognizable.

Wentz, the face of Fall Out Boy, was not afraid to address the Paris Hilton-style Sidekick scandal that has nude pictures of him popping up all over the Internet. It seems that his initial reaction of embarrassment to the incident has evolved somewhat into a bit of pride and cockiness (pun intended). His sexually suggestive, yet harmless, gesturing throughout the night drove female fans wild. Licking the neck of his guitar, stroking his mic stand and instigating an arena-wide wave consistently kept Wentz the center of attention.

Popular hits like “Sugar, We’re Going Down” and “Dance, Dance” came with frighteningly loud bursts of pyrotechnics at the back of the stage. Though somewhat overdramatic and distracting, the fire added an element of surprise to the otherwise prototypical rock show.

Just before Fall Out Boy’s anticipated encore was a wildly out of place professional wrestler being thrown through two tables, possibly to entertain the many males in attendance who were only at the show because of their girlfriends. Accompanying the spectacle was a video of the band on tour watching the same wrestler perform “Jackass” style stunts at different venues.

All-American Rejects, who preceded Fall Out Boy, were as lighthearted and energetic as the latter. The band’s charming melodies resonated with the sold out crowd of teens and 20-somethings who waved their arms back and forth for the closing song.

Current radio and VH1 hit “Move Along” was left until last, when singer Tyson Ritter put aside his guitar and “moved along” with the audience. His peppiness bordered on hysteria at times, running left and right like a chicken with its head cut off, or like a frenzied kid with ADD. However, that energy was truly infectious and lasted until the end of the evening, until every last angst-ridden emo punk rocker left the arena and went home exhausted.