The Wolfpack: escaping captivity and exploring the wilderness 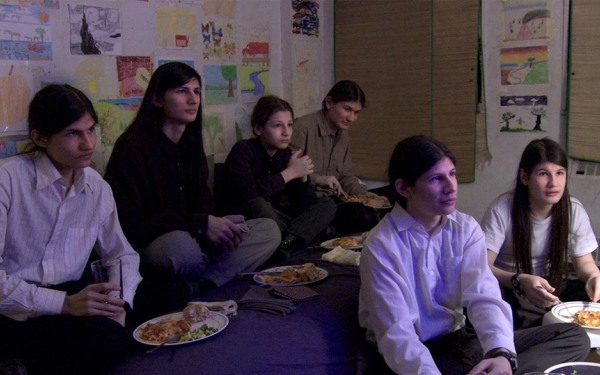 We don’t really think about changing our past. We’re interested in moving forward. - Narayana Angulo

When you’ve spent nearly your whole young life within the confines of a cramped NYC apartment with your six brothers and sister, odds are the concept of reality would become a skewed one. Accustomed to the severe regulations imposed by their father, the citizens of the apartment would have to create their own sense of reality within an unlikely environment, and for awhile, that was okay. But as all caged animals do, the boys grew restless as they watched a wholly untapped world go by outside their window—a world they were told was toxic, but had never proven to be so. That’s when, one by one, they opened the door, and emerged into the city’s wilderness as a unit. And so, the world finally meets The Wolfpack.

What first strikes you about the Angulo boys is how extremely modest, genuine, and collected they are. As the centerpiece of director Crystal Moselle’s first and extremely personal documentary, you would almost expect something off-putting or even tenacious from young men who have been essentially locked away their whole lives. Yet, while perhaps a bit awkward, they are altogether warm and open to new ideas and people, and wholly curious about all the world has to offer. Ironically, they didn’t realize that the world would be curious about them.

Govinda Angulo, 22, explains, “We didn’t think our story was that interesting. Mom said this as well. Like, who would want to watch a movie about our lives, because it’s really kind of boring… We didn’t know what audiences were going to take from this or how the reception was going to be, but it’s been great so far.

With delicate and respectable restraint, Moselle follows the boys through the compact hallways of their apartment as they do what they do best: intricately recreating their favorite movies with rather impressive results; however, with The Wolfpack being her first film and one that came about rather spontaneously, Moselle had to confront the trials of capturing a succinct and meaningful narrative.

“Having 500 hours of footage and finding the heart of a story can be a total challenge, but all in all it was pretty cool because these guys want to be filmmakers. I was able to give them a camera and they were shooting stuff themselves. It became, production-wise, a collaborative process,” recalls Moselle.

As the film progresses, covering over four years of these boys’ lives, we see that Moselle’s role extends much further than simply being the filmmaker, evolving into a friend, a confidante even. She gains insight into a truly unique familial unit run by a tyrannical father—who makes a few begrudged appearances—and proves that molds can be broken. The first brother to fly the coop, Mukunda, didn’t even realize his and his whole families’ lives would change the second he stepped out the door.

He remembers, “I just woke up and said, ‘Today I’m gonna go out.’ It just happened naturally, although, I had no idea it would become such a domino effect as it did. But I took that step—we all took that big step together to just get rid of that domination over our life. Now we are going to be dominating our own lives. We are going to push forward because life—that’s all there is. We’re moving forward now.”

Trailblazing forward is more like it. After spending a remarkable amount of hours making their own movies that catered to no audience but themselves, they have now become starring vehicles of a film that has already been lauded with such awards as Sundance’s Documentary Grand Jury Prize. Amazingly still, they are able to watch Moselle’s finished product with thoughtful objectivity.

“It was emotional for us, as well as an empowering experience. It wasn’t just about these kids coming out into the world and exploring reality all on their own. It was experiencing it with them. When I saw it, I took the thought that it was me on the screen and then just completely shut that off and just watched as if it’s someone else. I got to feel that I was living the moments with those kids,” says, Mukunda.

Bhagavan, the eldest of the Angulo brothers, adds, “I really appreciated that everyone got to tell basically their own story. It all comes together to just see it as one family that had goals, had objectives, and had dreams, and that we had each other to stay strong and work towards those dreams.”

It’s true; the brothers have indeed looked far beyond the restrictions of their past and see only the possibility of the future. Govinda may be the only one who has moved out of the apartment, working as a freelancer in the film industry, but his brothers who remain at the old abode have also claimed control of their own lives and have found work on their own terms. And yet, it’s hard to think of these brothers separating from each other, having become such a strong, unbreakable band of spirit. As it turns out, it’ll take more than leaving the apartment to keep them apart.

Govinda explains, “When everyone makes that move and finds their own place in New York City or wherever they want to go, we’re still going to have that bond because we’re starting our own company, Wolfpack Pictures. We’re always going to be working together.”

And thank goodness for that.