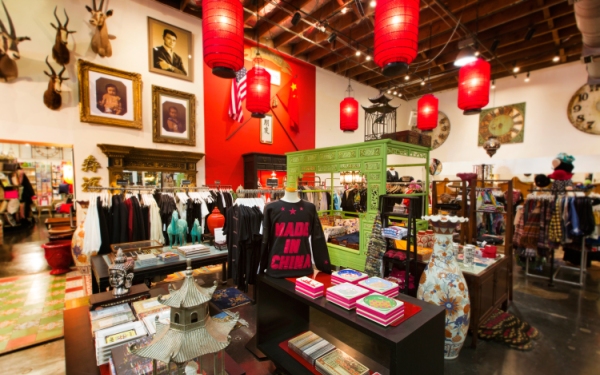 LOS ANGELES - “Made in China” has a whole new meaning thanks to L.A.’s American Rag Cie boutique, which has curated a shop-in-shop of contemporary Chinese fashion at its La Brea Avenue location.

American Rag owner Mark Werts got the idea for the fashion exchange while he was in China shopping for labels for the new 6,500-square-foot American Rag store opening in Shanghai in July.

The work of nine designers is featured in the shop-in-shop, all of it cool enough to sit with American Rag’s international roster of contemporary and streetwear brands and its hand-selected vintage pieces. The endeavor has something interesting to say about how China is so much more than the world’s largest luxury market.

“It’s an opportunity for people in the U.S. to see what kids in China are buying right now,” says American Rag buyer Caleb Lin, who goes back to Asia every few months for buying trips.

Designer Chi Zhang’s street and sport jersey-inspired print sweatshirts are emblazoned with the words “Made in China” in an effort to turn the association on its head, Lin says. “His motto is, ‘fix air pollution,’” Lin says, pointing out the Chinese characters on a sleeveless jersey. “He even sells gas masks at his boutiques because the air is so bad there.”

Men’s wear label Taciturnli, designed by Yunze Li, uses made-in-North Carolina Cone Mills denim to create worker jackets ($310) patterned after vintage Lee styles. (Yes, you read that right: U.S.-made denim going round-trip to China.) “He’s emblematic of a new generation interested in vintage, and the details of fabrication and heritage,” Lin explains. “He opened a shop on the back side of Tiananmen Square, and there is this one alley there that is probably the coolest place for young people in Beijing, where they have single-origin coffee, vintage shops and a Taiwanese bookstore that has Kinfolk magazine and Moleskine notebooks ... things you don’t find in China.”

Werts is married to Hong Kong-born designer Amanda Shi, whose label is also represented, including a luxe black silk and lace moto jacket ($687) based on a classic American Schott biker style, only with tulle flower appliques.

“Between the 1940s and 1980s, China didn’t have fashion. And it certainly didn’t have any American fashion during that time, so every single one of my pieces has some kind of American heritage,” says the designer, who moved to the U.S. when she was 24.

American Rag, which also operates a store in Newport Beach, has long had eyes on the East. With a Japanese partner, Werts has 19 stores in that market.

The shop-in-shop in L.A., which will continue indefinitely, comes at a time when the fashion spotlight is on China, in part because of “China: Through the Looking Glass,” the exhibition recently opened at the Metropolitan Museum of Art’s Costume Institute in New York City.

The shop’s opening event attracted an eclectic crowd, including China’s vice consul, Feng Deheng, based in L.A., and Chinese fashion blogger Lady Liaoliao, who traveled here for the opening.

Wearing a bleached blond bob hairstyle and round, wire John Lennon-style sunglasses, Lady Liaoliao seemed impressed enough with the offerings at the L.A. store, but what she’s really looking forward to is American Rag’s opening in Shanghai and its promise to bring stylish vintage apparel to the scene there.

“The culture of vintage is starting to boom in China,” she said. “People are not considering vintage secondhand any longer, but valuable. And average people can afford it.”