Apple, Google bet on walletless future, but are shoppers ready to pay with phone? 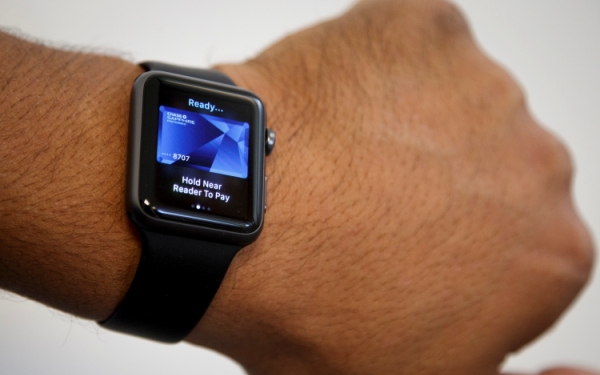 PALO ALTO, Calif. — Some pay for deli sandwiches with a flick of their Internet-enabled wristwatches. Osama Bedier waves his phone.

The customers who shop at Mollie Stone’s Market, at the heart of this Silicon Valley city’s startup row, are increasingly buying groceries without cash or credit cards.

“I haven’t carried around cards for a very long time,” Bedier said. “I try to travel very light.”

These shoppers are still early adopting outliers — especially Bedier, the executive who ran Google Wallet before starting his own company to build mobile payment terminals — but Apple, Google and Samsung are counting on them as bellwethers in a new fight to become your inseparable virtual wallet. And despite early resistance from retailers and even consumers, momentum is now building toward making these tap-and-pay systems a widespread consumer habit.

Apple earlier this month announced enhancements to Apple Pay, which was introduced in the fall, and Google said it will soon launch Android Pay, its Google Wallet successor. Amazon dropped out of the digital wallet race earlier this year but could return. Samsung is about to enter the market after buying Massachusetts-based LoopPay in February.

“What’s become the battleground for big tech companies is relevance: How do I become a crucial part of your life every day?” said Bedier. Making a purchase is “one of the few necessities you can’t live without,” he added.

Quietly waving and tapping a personal device to buy jeans or a burrito could one day become as ubiquitous as the old cash register “cha-ching,” but tech companies must still overcome challenges before they can persuade consumers — and, just as importantly, the stores that sell to them — to phase out magnetic stripe cards in favor of “near-field communication,” or NFC.

“I’ve been paying for a while with my phone,” said Google CEO Larry Page, speaking at the company’s recent annual shareholder meeting. “First time you pay with a phone, and you don’t have to pull out your card, mess with entering codes and signing things and so on, it’s a pretty great experience.”

Outside the gadget-loving world of Silicon Valley, however, not that many Americans are yearning for that experience. Seventy-five percent of U.S. consumers who don’t use smartphones to make purchases have no desire to change that practice, believing it’s easier to pay with cash or credit and debit cards, according to a March survey by the U.S. Federal Reserve.

“People still don’t see why they should bother with mobile payments when a little plastic credit card is just as easy,” said Matt Schulz of CreditCards.com. “It’s understandable that people are a little reluctant because it represents a major change to something we’ve been using in pretty much the same way for decades.”

But the momentum is moving toward wider adoption. The biggest propeller of change could be an October deadline set by the U.S. credit card companies Visa, MasterCard, Discover and American Express. In a joint move to reduce credit card fraud, the companies want retailers to switch over to enabling “chip-and-PIN” payments, accepting cards that rely on integrated circuits and personal identification numbers rather than magnetic stripes and hand-signed receipts.

While “chip-and-PIN” is different from the radio communication technology adopted by Apple and Google, retailers who need to overhaul their store terminals are likely to include both systems. And an entire industry of digital payment innovators — from PayPal and San Jose standard-bearer VeriFone to startups such as Square and Bedier’s Poynt — are working on getting better terminals in time.

All of this is moving toward a shopping experience that could give Silicon Valley companies far more information than they already have about consumer buying habits, pairing data collected online with real-world transactions that could be valuable to advertisers. Apple is also collecting from banks 15 cents from each $100 purchase, but Google will not earn fees, according to news reports.

Resisting the move to the tap-and-pay models touted by Apple and Google are some of America’s biggest retailers, worried about ceding to tech companies the consumer profiles that advertisers covet. A consortium called the Merchant Customer Exchange, or MCX, which counts Wal-Mart, Target, Kmart, CVS and other well-known brands as members, is working on its own app, CurrentC, that would allow smartphone users to scan a QR code to buy a product.

But the resistance is showing signs of fraying.

Google Wallet, introduced in 2011, never really took off because it arrived on the scene too early and “didn’t have the carrier relationships to help put the technology and software in every phone,” Bedier said. But today, Apple Pay and Google’s Android Pay have partnerships not just with major wireless carriers and credit card companies but with a growing number of merchants, from Whole Foods to McDonald’s. Best Buy, a member of MCX, recently broke away to partner with Google and Apple and accept their payments.

“I think MCX has been doomed to fail from the beginning,” said Dana Stalder, a former PayPal executive and partner at venture capital firm Matrix Partners. “I don’t think they have the wherewithal to offset the momentum.”

Much like the rise of e-commerce purchases on desktop computers, Stalder said the use of mobile payments will eventually hit a tipping point of merchant and consumer acceptance. Tokenization — which protects a person’s credit information from breaches by giving a unique code to each transaction — and fingerprint scanning will be built into the smartphone payment systems, reducing fears about security.

And the convenience is hard to match, he said. Stalder recently paid for a dinner at chain restaurant Paul Martin’s using his phone and the same platform, OpenTable, he used to make the reservation.

“Never even talked to the waiter,” Stalder said. “He knew we had paid, and came over and said, ‘Thanks for coming.’ That was it.”

At the Mollie Stone’s in Palo Alto, what began as a handful of customers six months ago has transformed into “40 or 50 a day” who pay with smartphones or watches, said store manager John Garcia. He jokes that many of his customers also wore Google Glass in the store before that experimental eyewear “went out of style,” but this new trend appears to be more than a gimmick.