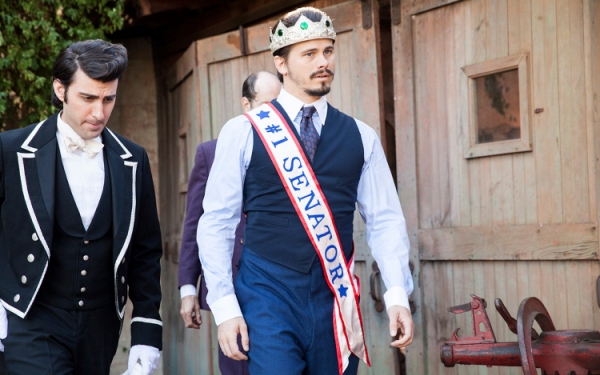 PASADENA, Calif. — Comedy Central’s new show “Another Period” is what the world of “Downton Abbey” would be if it were occupied by the Kardashians. It’s a tale of a family with no connection to reality set at the turn of the century in Newport, R.I.

Not only does the series come from the twisted comedy minds of Natasha Leggero and Riki Lindhome, but the pair also play sisters Lillian and Beatrice Bellacourt. The early 20th century divas have made it their life’s work to be a self-indulgent, spoiled, condescending and arrogant as possible. Their wealth is only exceeded by their banality and superficial self interests.

And, it’s usually the servants who end up the lesser for it.

Leggero and Lidhome had been looking for a project to do together. When nothing came along that seemed right, they took a different approach.

“We decided to do something together because we were both sick of being in stuff we didn’t think was funny,” Leggero says. “We figured that the best way to get the better parts was to be in our own production.”

Leggero floated two potential series ideas: One was a drama set in 1902 and the other was a fake reality show about people like the Kardashians.

“But, it would be fake,” Leggero say. “And Riki said, ‘Why don’t we put those together?’ And so, then, we went to Newport and spent a lot of time there and researched. And just hearing the stories, the comedy wrote itself.”

Poking fun at reality TV was a natural because it’s been a target of their comic work over the years. Leggero particularly likes playing characters who are flawed and don’t see the error of their ways. She sees the Bellacourt sisters as the ultimate version of that. In one episode, the Bellacourts rejoice at the death of their closest friends because their passing opens up a spot in a very exclusive club.

Ben Stiller, an executive producer on “Another Period,” says the pacing of the show really keeps coming at you.

“I think the pilot, to me, sort of set the bar for this mix of tones in terms of the comedy coming from this reality show vibe and then also just the anachronistic sort of thing that is going on, too.

The idea became short film three years ago that was used to pitch the series. It was enough to get Comedy Central to agree to produce 10 episodes that make up the first season.

It helps that both series creators have been dealing with comedy for years. Since making a grand cable debut as Rita “The Drunk” on “The Joe Schmo Show,” a little more than a decade ago, Leggero has appeared in many TV shows and movies, including a role on “Are You There, Chelsea?”

Lindhome also has a lengthy resume, including “Garfunkel and Oates,” a cable series she co-created with Kate Micucci. That meant Lindhome came into the collaboration with Leggero with an understanding of how to create comedy with a partner.

Leggero says the pair have found a great working bond.

“I feel like with Riki, that if we both disagree about something we will eventually find a common point,” Leggero says.

Because it took three years to get the initial idea to series form, the pair had time to refine the stories and find the exact amount of evil to play their rich witches. Both are certain that it was time well spent.

The original short only focused on the pompous family members. In the series, they add more areas for comedy.

“Two of the actors playing servants in the short had only one line. Now, they are series regulars,” Lindhome says.