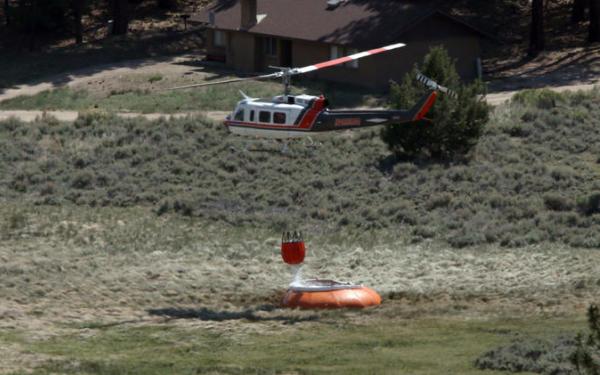 The cost of fighting a 17,305-acre wildfire near Big Bear in the San Bernardino National Forest has jumped to $6.8 million.

The blaze is the largest fire this year in California’s national forests.

The fire, which is now 21% contained, is burning at a moderate rate in the Barton Flats area, threatening 500 structures and charring trees and grass. The area has not burned in 100 years.

The fire is slowing, according to the U.S. Forest Service, and cooler temperatures this week are expected to help in the firefighting effort.

The low-intensity flames have allowed firefighters to gain ground and effectively attack the blaze.

The new fire growth is mostly along the eastern perimeter of the blaze near Coon Creek area. Wind is driving the fire, and burning logs rolling downhill also are spreading flames.

Fire crews plan to lay down new hose lines in dry rugged terrain as an aircraft drops water and fire retardant on the blaze.

Fire engines on Sunday night were patrolling communities near Hell for Sure Canyon and the Ten Thousand Foot Ridge, ready to battle any flames moving toward homes.

Firefighters believe they have a handle on the fire and are “looking at the big picture,” Beyer said.

With four years of drought and dismal snow pack measurements, firefighters are expecting to see similar wildfire conditions through the summer and fall, he said.

Hiking trails in the San Gorgonio Wilderness are closed. The Pacific Crest Trail from Whitewater Preserve Onyx Summit is closed.

Early in the firefight, authorities evacuated children from five camps. The children were bused to Redlands High School and later to the University of Redlands, where some were reunited with their parents, Beyer said.

Other students stayed at the university to finish out the remainder of camp, he said.