From homeless in Fresno to college graduate 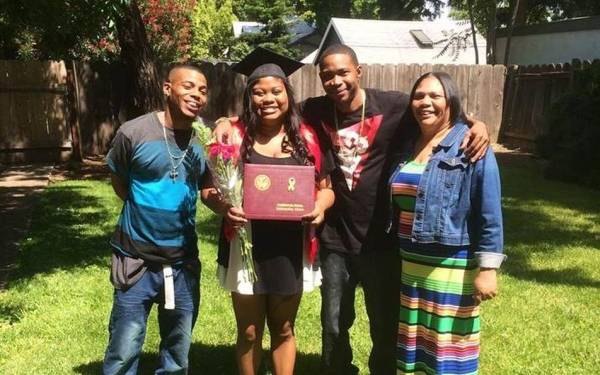 Sleeping in a car with her mother and stepfather in Fresno, even the moon seemed to weigh heavy on DJ Morris’ shoulders.

At the central Fresno park, she watched other children climb into SUVs with their families hauling sports equipment on their way home.

The word echoed through her as she gazed up at a starry sky through the back windshield.

The lonesome burden would descend over and over again. From age 8 to 10, and again from 14 to 18, she would live like this — ushered between parks, motel rooms and the homes of friends and family members.

Until one day, working at the school newspaper at Bullard High School, she saw a way out. Journalism professor Dave Waddell came by her journalism class and recruited her to California State University, Chico. The thought of going to college was just a “fairy tale” back then, but he helped her get a mix of financial aid and scholarships that made the dream a reality.

And for the first time in four years, she would have four walls and a bed to call her own.

Last month, Morris, now 22, accomplished another goal when she graduated from Chico State with a major in journalism and a minor in creative writing.

She’s working on saving up money in Chico, where she works at a cafe that sells tea, so she can move to Los Angeles within a year and pursue a career in screenwriting and feature writing.

She once dreamed of being an actress instead.

“I loved going on stage. I loved being a different person than the one I was, I guess. It helped a lot. I didn’t have to focus on what I was going through.”

At first, she said, joining the high school paper was just another avenue for becoming a famous actress. That was, until she found the power in her blossoming curiosity and imagination.

“I was attracted to human interest stories,” said Morris, who became editor of the Bullard Charger. “I didn’t have a voice for myself for what I was going through, so I wanted to be a voice to others who were going through whatever trials they had in their lives.”

But in the journals she scribbled in when the moon hung heavy, her own voice was already very much alive.

During her senior year of high school, she decided to bring that voice to the light of day. In the pages of the Bullard Charger, she shared the secret she was so ashamed of: She was a homeless girl.

She was tired of hearing people talk about homeless people like they were monsters.

“Be mindful of what you say around people,” Morris said. “Realize that homelessness doesn’t just affect adults or people on drugs, but it affects children, too.”

According to the Fresno Housing Authority, there were at least 140 homeless children in the city earlier this year, based on a volunteer survey conducted by the Fresno Madera Continuum of Care.

Morris’ high school journalism adviser, Diane Honda, who retired this month, said Morris’ decision to tell her story is even more remarkable considering the vast majority of students at Bullard “handily and easily” have all their food, shelter and clothing needs provided for.

Later, in a college English paper, Morris would again write about being homeless.

In the third person, she recalled: “One time in class, she remembered when a cheerleader with blonde straight hair flailed around the classroom because she saw a roach. Everyone freaked out, even the boys, and the teenage girl had a delayed reaction. She copied everyone else’s reactions even though that was not her first time seeing a roach. Even though that roach came from her backpack.”

This scenario would play out at least three more times.

And remembering hunkering down in a hot car in the park, too embarrassed to go out to play, Morris said: “That was one of the moments when I realized, ‘I am what you would see on TV. I am homeless.’ It was very hard, very hard, to wake up and still be there the next day.”

In her English paper, her story starts with that heavy moon and a tale of two Fresnos: one for the rich, and one for the poor.

She said some kids jokingly referred to her side of Fresno as the elephant graveyard in the Disney movie “The Lion King.”

“People could joke all they wanted,” Morris wrote, “but the teenager never saw the punch line of living in a drug sales and prostituted environment.”

By the time she was 15, some of her peers already had deep roots in this graveyard.

“I saw girls my age who went to prostitution, or guys my age start selling drugs. That is when I realized: This is real.”

The straight and narrow

Morris’ written story was also powerful for her mother, Demetra Pearson. She was diagnosed with mental health issues and raised her daughter mostly alone while her husband was in and out of prison.

“My boys are six and nine years older than her (Morris), and when she came along, I came into some real tough times,” Pearson said. “I couldn’t handle myself and I wasn’t aware of the things I was taking her through until she retold it to me.”

When Morris was in junior high, Pearson did jail time for drug charges. After that, Pearson said she wasn’t able to get work. Before, she was at least able to find employment at fast-food restaurants.

But through all the hardships, Morris thanked her mom for always pushing her to graduate from high school.

Pearson said tearfully, “She kept her straight and narrow on the school. I’m so proud of her — it just hurts that she had to go through all this, but she’s OK now. … She came out strong. She did it.”

Around the time Morris left for college, her mother moved in with her eldest brother, Darryl, 31, of Fresno, who’s also very proud of her.

Dropping off his little sister at Chico State four years ago, he started to cry.

“Now if you ever tell me you wanna become president, I won’t even doubt you,” he told her.

In Chico, she experienced many wonderful things for the first time, like water balloon fights and hiking, things most people are exposed to as children.

“I feel very happy and blessed. I had an extremely normal and great college experience in Chico. … I can honestly say that I got to experience the best out there and it’s only going up from here.”