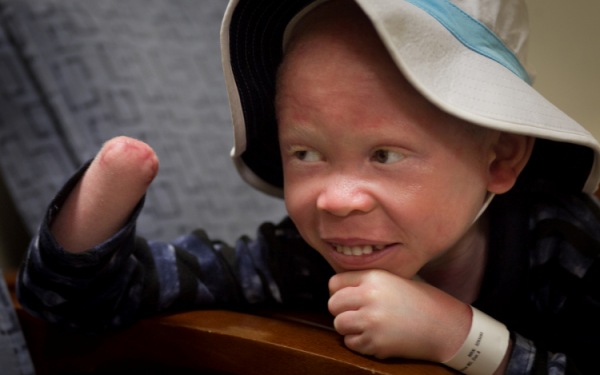 PHILADELPHIA - In Tanzania, superstition dictates that people with albinism are both despised as damaged demons and prized for mystical powers.

Deemed to be ghosts because of their lack of pigmentation, albino children are hunted by shamans, who use their body parts in witchcraft and potions. Their mutilation is thought to bring good luck to the attackers and others who visit witch doctors.

In March, assailants lopped off the right hand of a 6-year-old boy, Baraka Cosmas Rusambo.

Last year, 16-year-old Pendo Sengerema had her right arm hacked off at the elbow.

In 2010, Kabula Nkalango was 12 when three men wielding machetes broke into her house, sheared off an arm at the shoulder, and ran away with it. She nearly bled to death.

On a recent Wednesday, the damage wrought by such benighted beliefs met the healing power of modern medicine in Philadelphia. Baraka, Sengerema, and Nkalango were among five persecuted albinos from Tanzania who began free treatment for prostheses at Shriners Hospital in North Philadelphia.

The five were brought to America by Global Medical Relief Fund (GMRF), a small, Staten Island, N.Y.-based charity that has a long-standing relationship with Shriners in Philadelphia, which specializes in pediatric orthopedics.

Operating on an annual budget of $450,000 in donations, GMRF arranges visas, travel and room and board, and generally helps children who were maimed in war, including the Iraq War, and natural disasters, including the 2010 earthquake in Haiti.

A few months ago, GMRF founder Elissa Montanti read an Associated Press article about young Baraka’s plight and felt she just had to help, she said.

She reached out to Under the Same Sun (UTSS), a British Columbia-based group, founded in 2008 with a global focus and dedicated to ending the often deadly discrimination against people with albinism. UTSS has an office in Tanzania’s capital, Dar es Salaam, and helped Montanti identify Baraka and the others now getting treatment in Philadelphia.

Albinism is a genetically inherited condition that affects about one in 20,000 people worldwide. For social and scientific reasons, it tends to be more common in sub-Saharan Africa, experts say.

Recently UTSS released a report that documented 147 killings and 229 nonfatal attacks against albinos within 25 African countries since 1998.

UTSS also maintains a guarded safe house in Dar es Salaam, where the children live and are expected to return when their medical treatment in Philadelphia is complete. Their visas allow them to stay in America for six to nine months.

While critics say Tanzania needs to do more to protect people with albinism, the government has cracked down on albino killings, recently arresting 225 unlicensed healers, according to a report by the BBC. Last year, according to reports, the government added the death penalty to the sentences possible for people convicted of attacks on albinos.

Investigators with the International Red Cross and other international aid groups say dismembered limbs, genitals, ears, tongues and noses can fetch tens of thousands of dollars on the black market in Tanzania and other parts of East Africa, where anti-albino bias is most prevalent.

At the children’s intake appointment, nurses measured their height, weight and blood pressure.

Then they met individually with Dan Zlotolow, a Shriners specialist in hand and upper-extremity surgery.

Zlotolow, known as “Dr. Z,” evaluated each case. Ester Rwela, a UTSS social worker who accompanied the children from Tanzania, interpreted the doctor’s English into the children’s native Kiswahili.

Examining the now-17-year-old Nkalango, he said: “I won’t ask her the details of how it happened. I don’t want her to relive that.”

He pressed on the ugly scar on the two-inch stub that was once her arm.

“No pain?” he asked. Nkalango shook her head and said, “No.”

Then Zlotolow felt her shoulder joint and discovered that a very small bit of the humerus bone remained. An X-ray confirmed the finding.

“This is a very difficult case,” said Zlotolow, because there is so little anchor for a prosthetic arm.

He talked about an experimental procedure that would use a screw driven into her bone as an anchor, but said that was not practical.

Instead, he recommended a “passive elbow, passive shoulder, active hand” artificial limb that could be manipulated with Nkalango’s good hand to aid in unscrewing bottle caps, putting toothpaste on a tooth brush and other activities of daily life.

Next, Nkalango went to the orthopedics and prosthetics department, where prosthetists Lance Harms, Luis Velsaquez,and Jennifer Stieber fitted a gauze jacket over her torso, and used strips of cloth soaked in plaster of Paris to fashion a mold of her shoulder. It hardened in minutes, and Stieber used round-tipped scissors to carefully cut off the gauze jacket. Then Velsaquez trimmed the edges around the shoulder mold, which will be used to build her arm.

Nkalango returned that night to GMRF’s “Dare to Dream House” on Staten Island. The four-bedroom house was purchased three years ago using a $200,000 donation from the filmmaker Tyler Perry, along with funds from other supporters. In a few weeks, Nkalango and the others will return for preliminary fittings of their artificial limbs.

GMRF has helped more than 180 children since 1998. And as the children have grown, the organization has coordinated more than 1,000 follow-up visits to resize their prostheses.

Accustomed to dealing with severely injured people, its founder said she found the plight of the persecuted albino children particularly haunting.

“This is sadistic,” Montanti said at the hospital. “You weren’t accidentally injured. You didn’t accidentally walk into a cross fire. This was intentionally done. Someone came in and just hacked away. This is — how should I say it? — in a world all its own.”