Bound to Vengeance is the thriller that never quits thrilling 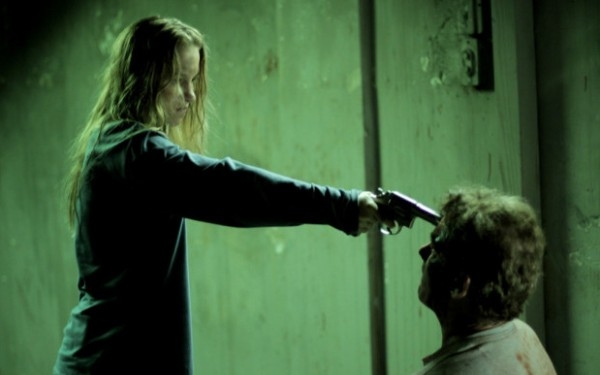 Revenge, I hear, is sweet. It can come in both small and large packages, and when done juuuust right, it can send chills of intoxicating gratification up your spine. Of course, that doesn’t mean revenge is easy. Just ask Eve. Or better yet, watch Eve, because in Bound to Vengeance she shows, with supreme kickassery, just how far revenge can take you no matter what or who is thrown your way.

In a movie world where we see far too many helpless female victims mostly just watch as someone else, undoubtedly a dude with enough muscles to spare, save all the lives and win all the glory, director José Manuel Cravioto (Seguir siend: Café Tacvba) thankfully believed that we were due for a different kind of hero. Think along the lines of Charlize Theron’s ferocity in Mad Max, but instead of the post-apocalyptic world and the wild, and admittedly awesome, car chases, imagine our world as it is today with the all-too-real shadows that lurk shamelessly in the night. This is Eve’s world of suffering. At least for a little while.

Bound to Vengeance traces Eve’s battle against her furtive abductor Phil. Once a defenseless girl chained in a basement of a nameless place, she was able to turn the tide against the evils that took her freedom and future in the blink of an eye. But escaping is just the beginning. When she realizes she is only one of many girls to fall captive under this man, she reframes her escape into a wild night of heroism and sweet payback, taking her abductor as a guide and prisoner. What she probably didn’t expect was the amount of bloodshed that would fall, innocent and otherwise, from her own hands.

The role of Eve is somewhat straightforward with a respectively simple goal, but Tina Ivlev (Death Clique) embraces every ounce of simultaneous anger and fear to bring a blasting energy to Eve. She never stops. Even when the mortifying and the horrific pass by, she merely waves and keeps running. It’s this kind of vigor that brings that sense of urgency imperative to thrillers, and what’s fascinating about Cravioto’s take is that it’s the victim setting the pace while the villain is the one trying to slow them down.

That brings us to Richard Tyson (There’s Something About Mary) as the exceedingly creepy adbuctor named Phil. All the dynamism that Eve presents is immediately counter-balanced with Tyson’s maddening sense of calm—and I mean that in a good way. Just when Eve seems to be getting in a groove of vengeful glory, Tyson is there to whisper a side-note of horror—something, or anything really that could halt her on her mission, one that he is an integral part of. He’s maliciously quiet, and that’s precisely what makes him such a strong baddie.

There are occasions, however, when Eve seems to be a little too fixated on her goal. Not to say it’s not the right thing to do, but there seem to be a few instances when her priorities actually should change, and instead suffers from tunnel vision.

But that is precisely why editing exists. The invisible hand making Bound to Vengeance rather irresistible is editor Jorge Macaya. If it weren’t for the unpredictable jump-cuts and flashbacks, Cravioto’s tale would have suffered from a linear narrative that would have collapsed with Eve’s straightforward goal, and he probably knew that. Macaya’s often jolting edits keep us wondering if what we’ve seen is really what happened, or if we maybe missed something. Causing an audience to reevaluate their own perceptions is the perfect mechanism in a thriller, especially if that’s precisely what our heroine is going through.

What may frustrate the thriller expert, however, is the ongoing habit of people on both sides of the moral compass not tying up their captors securely enough. After people have escaped from their bonds more than once, it’d be nice to see people take some extra effort to keep their respective opponent far away from killing you.

That being said, it really is Ivlev you walk away churning over. Cravioto and his writers weave an ending so full of enticing uncertainty, and with Eve as its harrowing leader, that it’s enough for you to question your own will and strength against hers. Could we withstand the pain she endures and still seek justice? Probably not, and that’s precisely why she’s the kind of hero our screens need.

Opens at Arena Cinema in L.A. and VOD June 26th!