Licensed to Film: A Fan's Take on the Beastie Boys 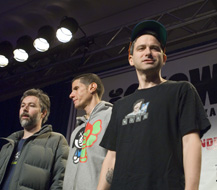 Perhaps you know him by his real name, Adam Yauch. Or maybe you recognize his alter-ego, Nathanial Hornblower. Or you might have heard him referred to simply as MCA.

If none of those names sound familiar, you don’t know the Beastie Boys. Yauch/Hornblower/MCA is not only one of the founding members of the celebrated New York rap group, but he is the band’s official historian of sorts. He’s not only is responsible for many of the band’s most popular music videos, but in his big-screen directorial debut, he has documented the band’s concert act in a film called Awesome; I Fuckin’ Shot That.

The “I” in the title refers to 50 of the band’s fans who were given video cameras during a 2004 concert at Madison Square Garden, and told to shoot what they see. Yauch then took a year to edit the footage, along with some film taken by more professional camera operators, and molded them into a film.

But don’t hold that against him. Even Beastie Boys turn into Beastie Men eventually. It seemed to me that you guys were really musicians at heart who kind of fell into rap. Even though you’ve had a very successful career, I was wondering how seriously you took rap? I see rap as a form of music. I don’t separate one from the other.

But in the new concert film, you play instruments during a couple of segments. We love playing instruments, but we’re a little tentative about playing in front of people until we get our footing. A lot of times, we used humor to make us more comfortable about the music. When you goof around first, nobody’s going to come down on you too hard if it sounds stupid.

Was there a lot of goofing around in the early days? Our first song was something we wrote called “Egg Raid on Mojo,” which was a song about chucking eggs at a bouncer who wouldn’t let us into a club. We wrote these songs in about two minutes, just to play at clubs. It was a hard-core scene and everybody was in a band so we formed a band. But then one of our friends said that if we were really going to be a band, we couldn’t write songs about chucking eggs at people. He said: “Who is a song like that really for, except for the 10 of us?”

So you changed direction after that? Not really. We continued doing that stuff for a few years. We wrote about our world, and people identified with it.

I’ve read that you were always interested in photography. Is filmmaking a natural progression of that interest? I guess it was. I’ve always been interested in doing our videos, and making films is the next step.

Did you ever regret the decision to hand over 50 video cameras to your fans and let them loose at a concert? Not at all.

What did the fans shoot that you couldn’t put in the movie? We probably put the weirdest stuff in the movie. No genitals, or anything like that.

Why did you want to document this particular concert? I got the idea from a kid who shot a clip from one of our concerts on his camera phone, and then uploaded it on the message board. We were on tour when I saw it, and I thought it was pretty cool. I had always had the idea to document a concert, but this gave me the idea to give out the cameras to the fans.

Now that you’ve documented the band in concert, should we assume that the band is about to retire? I don’t see any reason to. We’re still having fun. But we probably should. It probably would be the smart thing to do. Everybody else seems to be retiring.

Once you do retire, how do you think history will judge the Beastie Boys as a rap band? As rap’s weird uncle.