Why Jaws had real bite 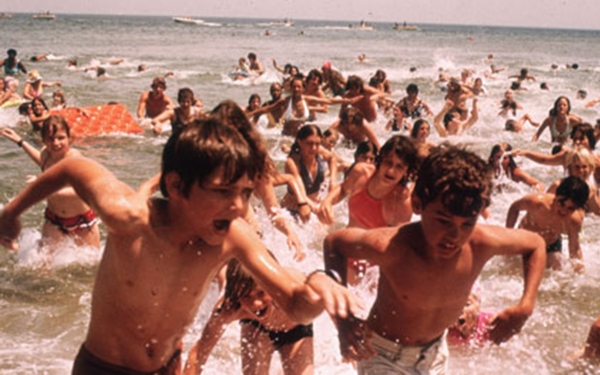 Under that credo, Claire could just as easily have been running a contemporary movie studio as a fictional theme park built on dinosaur DNA. “Jurassic World,” from executive producer Steven Spielberg, both mocks and embodies the more-is-more philosophy driving the modern movie business, where lumbering, $200-million T. rex-sized franchise films dominate studio slates.

In a business sense, “Jurassic World” is the undeniable grandbaby of another movie with Spielberg’s name on it at the box office this week — “Jaws,” which Fathom Events is re-releasing in select theaters Wednesday for its 40th anniversary as part of its “TCM Presents” series.

“Jurassic World” has established a massive new benchmark for a hit, the $500 million global opening weekend, by building on the lesson Hollywood learned in 1975 — how to brand a summer movie a must-see event with saturation marketing and widespread theater booking. The industry has an icky word for this now: “eventizing.”

But the other lesson from “Jaws” — the one that that’s mentioned far less often and seems to have been discarded like a pair of used 3-D glasses — is that while Spielberg’s humble creature feature minted the modern blockbuster, it also became a lasting classic on the strength of its human characters.

Yes, there were the chilling shots of swimmers’ legs flailing underwater, the propulsive John Williams score, the slow, suspense-building reveal of the giant gaping mouth of the shark.

But really, what separates “Jaws” from most of the B monster movies that preceded it, and from so many of the summer films that have followed, is the distinct, memorable characters played by Roy Scheider, Robert Shaw and Richard Dreyfuss and written by screenwriters Peter Benchley and Carl Gottlieb.

Nowhere in “Jurassic World,” “Avengers: Age of Ultron” or “Furious 7,” to name this year’s three biggest hits so far, is there a scene like the Ahab-esque monologue in which Shaw’s coarse shark hunter, Quint, relays his story of going down with the U.S. heavy cruiser Indianapolis during World War II.

The performances in “Jaws” evolved in part due to serendipity. Because the special effects sharks didn’t work properly, Spielberg had to minimize their use, suggesting instead the power of the animal through shots of its dorsal fin, and selling the danger through the reactions of his actors.

Spielberg’s problem was the exact opposite of the one that plagues contemporary directors of big-budget films like “Jurassic World’s” Colin Trevorrow. Today, with digital tools, crews of hundreds of visual effects artists can conjure any monster, devastate any cityscape and defy any law of physics. When literally anything is visually possible, almost nothing is plausible, or truly scary.

By now, the trouble young Spielberg faced on the “Jaws” set is the stuff of Hollywood lore.

Fresh off his debut feature, the noir-ish Goldie Hawn drama “The Sugarland Express,” and a thrilling TV movie, “Duel,” which pitted Dennis Weaver against a predatory tanker truck driver, Spielberg was hired to direct an adaptation of Benchley’s bestselling 1974 novel about a great white shark terrorizing a resort town. Spielberg’s $9 million Martha’s Vineyard shoot doubled its original budget due to problems with the mechanical sharks, script changes, wet cameras and seasick actors; the set was so beset by obstacles, the crew took to calling it “Flaws.”

When Universal Pictures released the film on 464 North American screens on June 20, 1975, the studio spent $700,000 on TV advertising in a few days, or roughly $3 million in 2015 dollars. On a modern marketing budget, that would barely cover the junketing cast’s travel and minibar expenses, but at the time, the advertising reach was, as The Times wrote in 1975, “a promotion man’s dream.”

In just 78 days, “Jaws” overtook “The Godfather” as the highest-grossing film in North America, to become the first picture to reach $100 million in rentals, ultimately earning $470 million worldwide, the equivalent of $2.1 billion today.

Licensees sold $3 shark-tooth pendants, inflatable pillows and tie-dye “Jaws” T-shirts, while studios distributed fliers of shark facts, “provided as a public service by the producers of Jaws.” “See it before you go swimming,” the trailer warned.

Most critics praised “Jaws” for its deft storytelling, and the movie went on to win three Oscars, for Williams’ score, Verna Fields’ editing, and the sound by Robert L. Hoyt, Roger Heman, Earl Madery and John Carter, as well as earn a best picture nod. Spielberg, of course, went on to make movies that shaped a generation of audiences and filmmakers. At age 68, he just finished a Cold War thriller, “Bridge of Spies,” starring Tom Hanks, and due from Disney in October; and he’s shooting a Roald Dahl adaptation about man-eating giants, “The BFG,” in addition to producing multiple films and TV shows.

Perhaps spoiled by the extraordinary studio filmmaking of the era or irritated by the ubiquity of the publicity, neither The Times’ Charles Champlin nor the New York Times’ Vincent Canby was a fan of “Jaws.”

“While I have no doubt that ‘Jaws’ will make a fortune for Universal and producers Richard Zanuck and David Brown,” Champlin wrote, “it is a coarse-grained and exploitative work which depends on excess for its impact.”

Little did he know that that was just the start of it; “Jaws” spawned three sequels, none of which approached the success of the original, three video games and two theme park rides.

If “Jaws” is excessive, the last 20 minutes of nearly every 2015 studio summer movie will induce an aneurysm, so deafening is the sound and so chaotic are the visuals. The characters barely merit a mention, unless to be ranked by their dumbness.

There have been a few studio films with rich characters this summer — “Mad Max: Fury Road’s” Furiosa (played by Charlize Theron) and “Inside Out’s” Sadness (voiced by Phyllis Smith) come to mind. But most resemble “Jurassic World’s” Claire Dearing, who has endured ridicule for, among other things, spending hours running away from monsters in high heels. (For future reference, male filmmakers, most professional women keep a pair of flats under our desks in case the apocalypse hits.)

“Jaws” merits re-watching not because it helped revolutionize the business of movies, together with another little sleeper hit two summers later called “Star Wars,” but because it’s a model of efficient, character-driven storytelling. If Spielberg had had the digital tools of 2015 at his disposal as a young director, maybe he wouldn’t have learned to tell a story through an actor’s widened eyes or a barrel bobbing in the water.

Maybe handing today’s young directors gargantuan visual effects budgets does them no favors. Maybe with less, they’d end up giving Claire Dearing a Quint-like back story and a sensible pair of shoes.