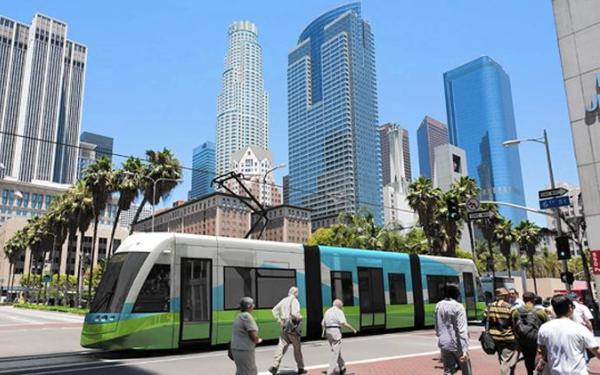 An artist's rendering depicts the proposed steetcar at 6th and Hill near Pershing Square in downtown Los Angeles.

Two and a half years ago, downtown Los Angeles residents overwhelmingly approved a new property tax to build a streetcar line through the heart of their reemerging neighborhood. Officials said the local rail loop would attract business and new development to dormant blocks and help revitalize the city's historic core.

But since that political victory, progress on the Los Angeles streetcar has slowed as politicians have contended with fluctuating cost estimates and schedules, new operating challenges and a persistent funding gap.

The latest estimate, released last week, puts the cost of the tram at $282 million, with just $62.5 million in funding secured. The price tag is presenting city officials with tough choices, including the possibility of cutting part of the route to close the $220-million shortfall and qualify for federal funds that are crucial to the plan.

The complications partly reflect confusion over what the Los Angeles streetcar is supposed to be, experts say. The trains have been promoted as a transit system, and the city is seeking federal transportation funding, although the route won't connect to Union Station and construction is being overseen by an agency that has never built a rail line. The project also is being pitched as a tourist attraction and stimulant for downtown real estate development.

Experts say the best hope for success is to ensure the four-mile loop effectively serves the needs of riders.

"The project is only going to serve as an economic development tool if it's useful," said Yonah Freemark, a Chicago urban planner and writer who has analyzed U.S. streetcar projects. "If the trains are moving so slowly that people have no reason to take them, then the project itself probably won't generate any other benefits."

The streetcar would run along Broadway from 1st Street to 11th Street, then west to the Staples Center and north through the financial district. Along two legs of the route, streets recently have been narrowed to one lane to make way for bike lanes and pedestrian improvements. And since the streetcar was first proposed a decade ago, downtown has become one of L.A.'s hottest neighborhoods, with the traffic to match.

The latest estimates are "obviously concerning," Lefton said, especially for people who have to wait more than five minutes for the next train. "If you have to wait that long for such a short trip, and if the speeds are that slow, you'll choose other options."

The only way to guarantee faster service is by removing cars from the equation, either by closing streets to traffic or dedicating a lane for transit, he said. However, neither of those options is under consideration.

To ensure that trains arrive every seven minutes during peak periods, Lefton said, the city would need to add four more cars at an estimated cost of $24.3 million, which would increase the project's price tag to more than $300 million.

Where that money would come from isn't clear. Downtown residents approved a property tax district that will raise $62.5 million for construction, but that funding would cover only about 25% of the project cost.

"We are at a critical point in terms of developing this project," City Councilman Jose Huizar, the project's champion, said during the meeting last week. "We are setting up a road map."

A federal grant of up to $75 million that Huizar's aides hope to win requires the project budget to remain below $250 million. Any estimates higher than that — including the current $282-million figure — would bump the streetcar into the next category of competition for funding and pit it against the nation's most sophisticated and expensive transportation proposals, including highway projects and subway lines.

But, analysts said, Los Angeles will not be considered for any federal grants without a plan to eliminate the shortfall and fully fund the streetcar project.

Officials aim to bring the project in under $250 million. But there are few welcome options for cutting $32 million from the budget. Planners could eliminate the portion of the route that passes the Walt Disney Concert Hall and the Dorothy Chandler Pavilion on Grand Avenue. Or they could try to reduce the costs of utility work, typically one of the most expensive construction features on such projects in Southern California.

To close the funding gap, officials also could seek a private company to build and operate the line, or real estate developments along the route to generate additional revenue. "We're taking an optimistic approach and hoping we can find a way to make this work," a city analyst said during the meeting.

Some council members voiced skepticism. Responding to the city analyst, City Councilman Paul Krekorian asked: "Is there any reason to be optimistic about that?"

Huizar said two dozen firms have expressed interest in participating in the project.

First expected to open in 2014, the streetcar now is scheduled to begin service in December 2020 — after the Downtown Regional Connector, the 1.9-mile rail connection that will knit together the Blue, Gold and Expo lines between the Financial District and Union Station.