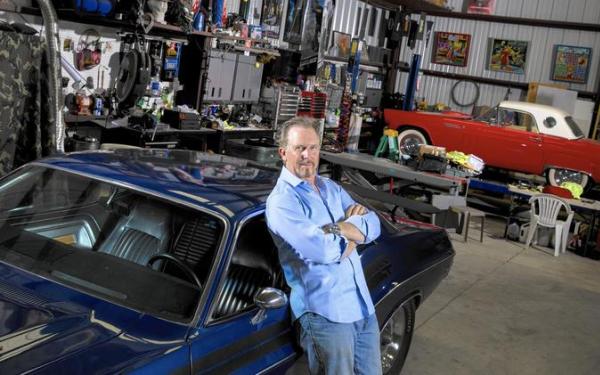 Veteran stuntman Jack Gill inside his workshop, with his 1971 Dodge Challenger RT and an assortment of collectibles from various film and TV projects, in Agoura Hills, Calif., on June 16, 2015.
(Credit: Jay L. Clendenin / Los Angeles Times)

If you need to jump a car across a chasm, Jack Gill can tell you how. If you have to drive a motorcycle through a wall of flame or fall from a 12-story window, he's your guy. Over the course of his 40-year career performing and orchestrating stunts in films and television, Gill has pulled off those and many other perilous feats — and he has a 6-inch titanium plate in his neck to show for it.

But there is one leap Gill hasn't been able to make. Despite a nearly 25-year crusade, Gill has been unable to persuade the Academy of Motion Picture Arts and Sciences to create an Oscars category recognizing stunts.

"Every year I think, 'This is going to be the year,' and it keeps coming back with a no," Gill, 60, said on a recent afternoon over lunch in Beverly Hills, having just returned from a veteran stuntman's idea of a vacation: a 2,000-mile motorcycle trek across Alaska. He shook his head. "It shouldn't be this difficult. It really shouldn't."

This year, Gill was certain he had his best chance. In recent months, he says, he received positive signals from Dawn Hudson, the academy's chief executive, and academy President Cheryl Boone Isaacs that appeared to be pointing the way toward a new Oscars category for stunt coordinators such as himself. "There was kind of a ray of sunlight after 24 years of dealing with 'This is our own personal golf course, and we're not going to let you on it,'" Gill said.

Gill has continued to line up backing from high-profile actors and filmmakers for the effort, building on a list that includes the likes of Steven Spielberg, Martin Scorsese, Brad Pitt and Arnold Schwarzenegger. In a letter this week to the academy obtained by The Times, Johnny Depp wrote in part, "I believe it's time that the valiant stuntmen and women deserve to be recognized come each and every award season and hence I am happy and proud to support a campaign to create an Academy Award category for Best Stunt Coordinator."

In an email, "Furious 7" star Vin Diesel wrote that stunt coordinators "significantly contribute to creatively developing the big action moments that the audience remembers forever, at the same time as ensuring the safety of our stunts" and that Oscars recognition for them is "long overdue."

But since Gill met last week with the academy's leadership, his hopes have faded. When the academy's 51-member board of governors meets Tuesday to take up a range of issues, the question of an Oscar for stunts is unlikely to be on the agenda, insiders say.

Stunt performers are honored each year at the Emmy Awards and the Screen Actors Guild Awards. But — although Gill and others have argued that the inclusion of a stunt category could only help boost the populist appeal of the Oscars telecast — the film academy has never recognized stunts either on Oscars night or at its untelevised Scientific and Technical Awards. (The two exceptions: Stunt performer Yakima Canutt received an honorary Academy Award in 1967 for developing safety devices for stuntmen, and stuntman turned director Hal Needham received a lifetime achievement Oscar in 2012, a year before he died.)

"The board has never seen fit to extend a category for stunts," then-academy Executive Director Bruce Davis, who is now retired, told The Times in 1994. "It would get corny as hell to have several stunt categories. Do you give an Oscar for people getting blown out of windows?"

Gill, who started his career as a stunt performer in the 1970s and has worked on the likes of "The Dukes of Hazzard" and "Knight Rider," says the stunt community is asking for only one — and that, given the key role stunts play in so many movies, it's only fitting. "It's frustrating to us because they run action sequences [during the Oscars telecast] to keep people in their seats, but we're not up there," Gill said. "We're not any part of it."

Though the issue of Oscars recognition for stunts has simmered for years, this year it has taken on fresh immediacy. In 2015, moviegoers have already seen some of the most eye-popping stunt work ever put on screen, whether it's cars being dropped from a C-130 transport plane at 12,000 feet in "Furious 7" — a feat that Gill himself coordinated — or the gonzo nonstop demolition derby of "Mad Max: Fury Road." Next month, moviegoers will see Schwarzenegger unleash mayhem as a futuristic cyborg in the action-heavy "Terminator Genisys" and Tom Cruise hold on to the side of a plane as it takes off in "Mission: Impossible — Rogue Nation."

"This issue has really come up a lot this year," said "Fury Road" stunt coordinator Guy Norris. "There's probably been more talk about it in the first six months of this year than in the past 10 years."

Hudson and Boone Isaacs declined to comment, but academy insiders say that the primary obstacle to a stunt category as it stands boils down to numbers. There are only 31 stunt coordinators in the academy (they are included in the members-at-large branch), and the feeling among the academy's leadership is that — for now, at least — it is too small a pool to constitute a branch with its own award representing the stunt community. (The current smallest branch with an awards category is costume designers, with 125 members.)

In a statement, an academy spokesperson said, "Stunt coordinators play an integral role in many movie productions, and those at the top of their craft are invited by their peers to become academy members.We continue to encourage them to grow within our membership."

Gill counters that, given the relatively small number of stunt coordinators working in the film industry, the current academy membership "fully represents what we have."

Since launching his campaign in 1991, Gill says, he's run into a range of arguments for why stunt coordinators shouldn't have an Oscars category, all of which he disputes. He's been told there are already too many awards in the Oscars telecast as it is (he says he'd be fine with an award handed out off-air). He's heard arguments that there wouldn't be enough stunt-heavy movies in any given year (with the preponderance of action scenes across a range of genres, he says there would be more than enough). He's heard some suggest that stunts aren't really enough of an art or a science.

That last claim rankles the most. "To say that it's not an art form is just a misunderstanding of what our craft involves," said Norris. "We've gone so far beyond the John Wayne days when it was all falling off a barn or getting dragged by a horse. We're in a whole other realm that I call 'high-risk illusion.'"

Though he's resigned himself to the likelihood that his long campaign won't find success this year, Gill isn't about to give up on it. This is someone who over the years has broken 23 bones, punctured his lungs, had a finger sewn back on and gotten eight concussions. Suffice to say, he doesn't quit easily.

As frustration mounts in the stunt community, though, Gill believes things may eventually escalate.

"I would hate to see stunt guys demonstrating out in front of the Academy Awards, because that's their special night," he said. "Every year I've tried to talk them out of it and I've been successful. But I can't stop them forever."