What happens when a millennial goes fascist? He starts up a neo-Nazi site 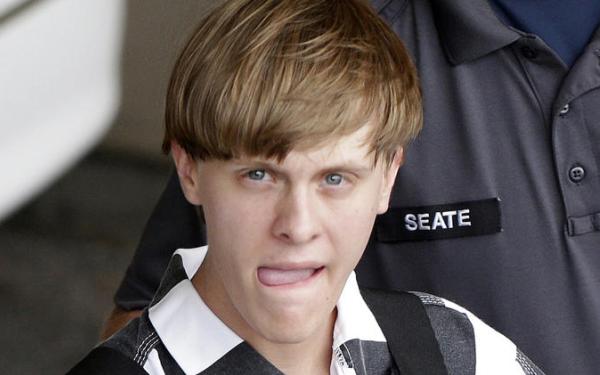 Andrew Anglin, 30, the publisher of the neo-Nazi website Daily Stormer, wouldn’t say where he was.

He wouldn’t even say if he was in America.

Anglin has gotten a lot of media requests after the Southern Poverty Law Center said Dylann Roof, the man accused of killing nine black parishioners in Charleston, S.C., last week, was possibly a commenter on the Daily Stormer, Anglin said in a Skype audio interview Tuesday.

Anglin decided to respond to a Los Angeles Times interview request because -- it’s a small world -- he saw the reporter tweet Monday night about reading “The Forever War,” a classic and widely hailed 1974 science-fiction novel by Joe Haldeman about a human war against an alien race that lasts for centuries. Coincidentally, Anglin had also just read it.

"It seems like the mainstream media generally doesn’t want to talk about my site that much," said Anglin, whose site uses racist terms, features a section called "Race War" and regularly trumpets stories about crimes with white victims and black suspects.

Anglin created Daily Stormer -- named after the notorious Nazi tabloid "Der Stürmer" -- around the time that George Zimmerman, who shot and killed black 17-year-old Trayvon Martin, was on trial for murder.

However, Anglin said the Zimmerman trial wasn't the reason he created the site, whose readership has grown every quarter since 2013, according to website-traffic-tracking site SimilarWeb.

"I wanted something punchy and funny and enjoyable to read, and something that anybody can get something out of,” said Anglin, who previously ran a site called "Total Fascism," which featured longer essays.

"A lot of people on the Internet prefer to write long essays, which a lot of people don't read, which have a limited audience. ... My ideology is very simple. I believe white people deserve their own country. ... There's not really anything that can happen that can affect my ideology because it's so simple and straightforward."

Anglin, who lists a mailing address in Worthington, Ohio, also doesn't believe that violence is necessary to bring about a white nationalist revolution, but that the first step is to disseminate information -- hence the Daily Stormer.

"There could be all types of different peaceful solutions if you were able to publicly discuss these issues and look for goals that make sense. Right now, you're not even allowed to discuss this publicly on any level,” Anglin said. "The first thing that needs to be done with any of this is have a public conversation about this.”

Today, Anglin said, "information flows in a completely different way and we’re able to have a discussion where everybody can be included in it and the truth of the matter can be found." (Anglin's Twitter icon calls for Twitter to lift its ban on controversial conservative blogger Chuck Johnson.)

Anglin's site, although unique in its combination of fascism with a millennial tone, does not differ greatly in ideology from many white-supremacist websites that traffic in negative stories about African Americans and Jews. The Southern Poverty Law Center does not keep count of such websites, but says the number of hate groups across the country has increased by 30% since 2000.

In 2012, the center counted 186 Ku Klux Klan groups, with 52 separate websites, in addition to hundreds of other groups described as white nationalist, neo-Nazi and skinhead groups, most with websites.

That doesn't mean those sites are aligned with Anglin's vitriolic ways, however. Far from it.

"Oh, you poor boy," Jared Taylor, a "race realist" who publishes American Renaissance, said in an interview when a reporter mentioned reading the Daily Stormer. "They have an extremely harsh, dismissive and insulting tone toward blacks. I think that kind of rhetoric is extremely unhelpful."

The blog "Alternative Right" in 2014 posted that "hatred, among the weak and the feeble, is often simply transmogrified fear, which is one of the odours emanating from The Daily Stormer and its audience, who feel attracted to Anglin's schtick in the same way that poor, downtrodden Whites are attracted to monster trucks and professional wrestling."

"It is hard not to conclude that Anglin is a paid shill and agent provocateur, whose purpose is simply to infest and discredit White nationalism," the post concluded.

Other hardliners have previously raised questions whether Anglin was mixed-race -- a big no-no among white supremacists, as you may have guessed. That led Anglin to publish photos of his family to demonstrate his racial heritage.

"Andrew Anglin is a White Man," Anglin titled the post on his "Total Fascism" site in March 2014.

In his interview with The Times, Anglin said he still makes enough money to keep the site going just off direct reader donations, even after PayPal shut down contributions to the site through its service earlier this year.

Anglin has continued to flood his site with ugly content after the Charleston massacre, and he said he keeps planning to do what he's doing, even though the attack has been tied to Roof's white supremacist ideology and reports that Roof commented on the Daily Stormer.

Anglin distanced himself from Roof, saying there was no direct confirmation that Roof had commented on the site, though he acknowledged that Roof's general ideas were probably not that far out of the ordinary among Anglin's readership.

“The manifesto itself from Roof is basically a generic type of material that would be associated with white nationalism," said Anglin. "There's nothing he said there on my site that would not be on any other white nationalist site. ... He would have come across my website if he was looking into the type of things that he wrote about in that manifesto.”

Anglin said that the Daily Stormer account attributed to Roof had commented maybe 21 or 22 times on Anglin's site, not enough to make Roof much of a regular. Some of those comments disputed Anglin's particular strain of white nationalism.

"The guy is disagreeing with me," Anglin said. Roof "was mentally ill, clearly," possibly influenced by psychoactive drugs, Anglin said.

"It would be one thing if he went Charles Bronson, ‘Death Wish,’ and started shooting criminals in the streets. You’d have a way to frame that in your mind,” Anglin said. “But to shoot old ladies in a church, it’s a completely insane act, clearly. The fact that he chose that target shows that he's mentally unstable. ... I don’t think he's any different from any of the other mass shooters that we've had in the U.S."