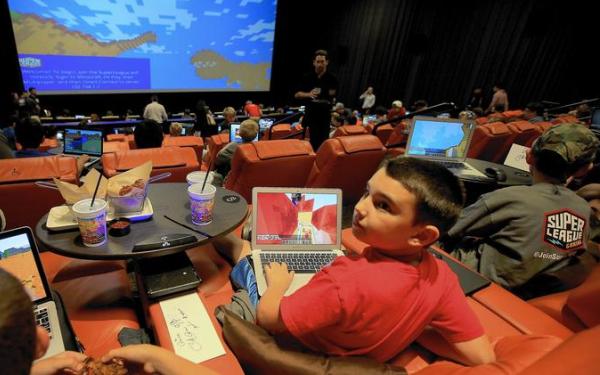 Salvador Solis Jr. stared intently at the movie screen in front of him, watching people scramble around dinosaurs.

But the 11-year-old wasn't at Westwood's iPic theater to catch a matinee screening of the summer blockbuster "Jurassic World." He and about 100 others filled the seats to play a video game called "Minecraft," where they built dinosaurs in a virtual world controlled from their laptops and simulcast on the big screen.

"I liked meeting people and playing 'Minecraft' with them," Solis said.

That's exactly what theater owners are banking on.

Cinemas are having to work harder than ever to lure younger patrons to the multiplex because they have more entertainment options in the home, including streaming movies on their tablets and playing video games online. Reflecting the trend, attendance at movie theaters in the U.S. and Canada last year was 1.27 billion, down from 1.5 billion in 2004, according to the Motion Picture Assn. of America.

To boost profits, big theater chains have been trying new ways to draw in crowds who want to be entertained as part of a group experience.

"Theaters would like to be your local destination for all your entertainment," said Matthew Harrigan, an analyst with Wunderlich Securities.

The three largest theater chains in the nation — AMC Entertainment, Cinemark Holdings and Regal Entertainment Group — formed a joint venture a decade ago to help fill seats that might otherwise go empty during off-peak hours.

Fathom Events offers simulcasts of concerts, Broadway shows, big sports matches and other events that can be broadcast digitally to theaters across the country. Those theaters then can make money by selling tickets at a premium.

Video games have also proved to be a popular draw. Cinemark, for example, recently partnered with Coca-Cola Co. to present a viewing party for part of the world championship series of the video game "League of Legends."

"We've tried to create an environment that caters to all our customers," said James Meredith, who heads marketing at Cinemark. "Many moviegoers are also gamers and we want to make our theaters must-visit places for them."

Theaters fill only about 16% of their seats during an average day, mainly because of very low turnout during weekday mornings and afternoons, according to Wunderlich Securities. So theaters see financial sense in essentially renting themselves out, especially since they don't have to bear much of the cost to host the events.

This new business model has attracted companies trying to cash in on the trend.

The company was co-founded by John Miller, David Steigelfest and Brett Morris, who saw their children come home from school to play video games by themselves. They wanted to give their kids the same social experience that children who played outdoor sports like soccer or baseball had.

"We thought, if baseball has a Little League, why shouldn't kids who play video games have their own league?" Morris said. "Plus there's the competitive aspect to it, the thrill of playing to win."

Morris and his partners approached AMC, Regal and Cinemark about using their theaters to host a video game league that will run during six-week tournaments.

Participants at the iPic theater paid $20 each to participate in Wednesday's nearly two-hour video game session, with the ticket revenue split between the theater and Super League Gaming.

"I walked into the theater here and they were showing 'Jurassic World,' which spent millions of dollars in production and marketing, and you know how many people were in the theater?" Morris said. "Three people."