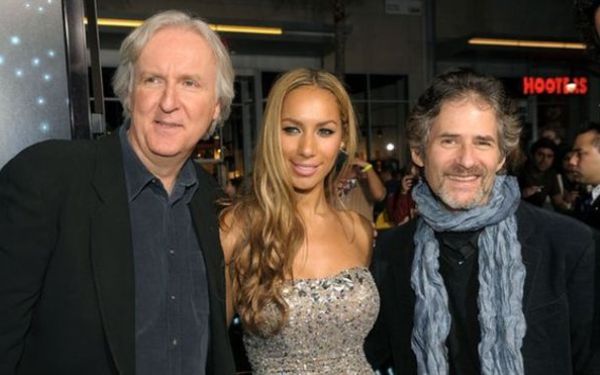 James Cameron and James Horner (right) at the Avatar premier with Leona Lewis - who sang on the soundtrack.
(Credit: bbc.com)

LOS ANGELES — James Horner’s “My Heart Will Go On” added to “Titanic’s” emotional punch, sent singer Celine Dion to the top of the music charts and won an Academy Award.

“You wouldn’t put a song at the end of ‘Schindler’s List,’ ” Cameron recalled telling Horner when the composer, who was scoring the film, suggested the idea. “This is a serious historical drama.”

Horner wrote the song anyway, quietly enlisting lyricist Will Jennings and Dion to collaborate on his secret project.

He waited for a day when he felt Cameron was in a good mood — a rarity on the pressured production — to play the track in the director’s Santa Monica office. The song, Horner believed, wove together the soaring themes of the film’s romantic and action scenes with the intimacy of Dion’s powerful voice.

“I thought, ‘Oh, crap, a song,’ ” Cameron recalled Tuesday. “But as I listened, I started to realize how great it was. I felt a connection to it. I said, ‘Let that carry the people out of the theater.’ ”

Both “My Heart Will Go On” and Horner’s score won Academy Awards in 1998, and the soundtrack became an instant and ubiquitous hit. There are dance club remixes that intersperse Leonardo DiCaprio and Kate Winslet’s dialogue with the ballad, and artists as varied as Neil Diamond and Miss Piggy have covered it.

Horner, 61, is believed to have died when a small plane registered to him crashed and burned in rugged terrain near Santa Barbara on Monday.

“James, like me, was not satisfied by having vicarious adventures through movies,” Cameron said, referring to Horner’s love of flying. “He wanted to be vicariously present, with his hands on the controls.”

Though Horner wrote more than 110 movie scores, including for “Braveheart,” “A Beautiful Mind” and “House of Sand and Fog,” it is Cameron with whom his career is intertwined.

Sharing an intense creativity and drive, they both began their careers in Roger Corman’s humble B-movie factory in the late 1970s. They collided unhappily on the rushed post-production of “Aliens,” established an artistic trust on “Titanic” and cemented their partnership on the risky, musically inventive score for “Avatar.”

“I knew him back when he was still Jamie Horner,” Cameron said. “James was a very emotional guy, a very sensitive, big-hearted guy. Even though he did these incredibly robust themes, it was always his emotion that made his scores great.”

Their first shared project was the 1980 “Star Wars” knockoff “Battle Beyond the Stars,” for which Cameron designed the sets and Horner wrote the music. Though they were toiling with low budgets and short schedules, both men harbored wider ambitions, and Horner, who had started piano at age 5 and studied at the Royal College of Music in London, made a lasting impression on his colleagues.

“Battle Beyond the Stars” “had this huge score,” Cameron said. “To us it was like John Williams. He had been classically trained, he knew what he was doing. We were all shocked.”

Their first pairing as director and composer, however, was a disaster. On the 1986 film “Aliens,” Cameron’s first big studio production, the British crew and editor rebelled against the brisk working tempo. As the next man in the post-production assembly line, it was Horner who suffered. He left to score another film, and Cameron added more music without him.

A decade later, when Horner met with Cameron about scoring “Titanic,” the two agreed it had been the process on “Aliens,” not the people, that was the problem.

“With a composer, it’s about having trust, respect, knowing that you’ll get there, working together from the beginning,” Cameron said. “It’s being able to talk it out. I’m not trained in music, so I would always apologize to James and say ... ‘I can only react emotionally.’ ”

On “Avatar,” Horner tackled the complex assignment of finding a sonic treatment for the alien world of Cameron’s imagination, Pandora, via ethereal choirs and ethnic instruments.

“ ‘Avatar’ was about going into the unknown,” Cameron said. “He wanted to push it away from the center and Western conventions. He could run off and do those explorations in the score. It was fun.”

As recently as late April, Cameron and Horner attended a Royal Philharmonic Concert Orchestra performance of the “Titanic” score at London’s Royal Albert Hall together.

“London was a great way to honor James for what he had done for the film,” Cameron said. “It never really got said properly in 1998. He went up and took his bows at the end. It felt like a triumph. I think that’s the score he’s proudest of.”

At the London event, Cameron and Horner discussed their plans for music on the “Avatar” sequels.

“We’re going to have to find somebody to fill those shoes,” Cameron said. “I haven’t gotten past that. I’m going to really miss the collaboration. It took us a while to develop our transparency, but by the time we made ‘Avatar,’ we were just a great team.”