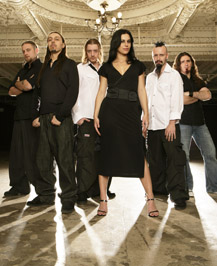 Lacuna Coil’s members may have crossed an ocean to come from their native Italy to the U.S., but geographic boundaries are certainly not the only lines the band intends to blur. With the release of Karmacode, their first album in four years, frontwoman Cristina Scabbia and her band mates have a lot to shoulder in terms of pressure and expectation, but what are women in metal known for if not strength, tenacity and the ability to kick the ass of anyone in the way of what they want?

While Scabbia’s disarmingly comely appearance may fool the uninformed, she’s managed to stave off pigeonholing and disprove any stigmas looking to be attached to Lacuna Coil. And with the band on many a metalhead’s radar by now, she was not about to let any naysayers be right.

“It’s a very dynamic album and it’s more varied, compared to Comalies. With almost two years spent in the U.S., it’s been a strong influence in our music,” Scabbia says of Karmacode and the effect touring cross-country had on the writing. “It’s something in between the European and American culture, in that we kept our European roots but at the same time, we had a bigger sound, a fuller sound that is typical of American production.”

While the “bigger, fuller” sound is something Scabbia associates with American metal, the singing duties she shares with male co-vocalist Andrea Ferro have been what definitively flavor Lacuna Coil’s rich sound in true Italian fashion. Though Scabbia remains ever the siren on the album with her distinctive pipes, she prides both herself and Ferro on being able to move outside of what’s expected of them.

“With two different voices, we can reach every note of the spectrum, and it’s not set that Andrea has to do the aggressive parts and I have to do the mellow ones. We like to change as well,” she says. “Being a woman doesn’t necessarily mean I have to be a harmless princess on stage and he has to be the beast.”

Taking a more aggressive vocal role may not intimidate Scabbia, and she more than likely welcomes the challenge of proving how good she is at it. But even so, she doesn’t hesitate to show that even with all her confidence, the tough-as-nails songstress is still human as well.

“Probably the hardest thing is finding a balance between touring, working a lot and our private lives. Some people don’t realize that it’s a sacrifice. You really have to work your ass off,” she says of her chosen profession. “You spend a lot of time away from family, friends and partners. We’re lucky because we’re real friends so we always have someone to rely on, but of course, sometimes you just miss your family. With an ocean in between you, it’s pretty hard.”

At least for Scabbia, the sacrifice is worth it in the end. “I’m here and enjoying what I’m doing. I’ve made a job out of my biggest passion. Every day I realize that I love what I’m doing and that’s happened since the day I started,” she says.

Joining the band nearly 10 years ago, Scabbia’s continued enthusiasm for creating music remains a testament to the fact that their current success is well-earned. For her, though, it’s all about timing.

It’s definitely one moment that has been a long time coming. Karmacode is currently available. Lacuna Coil will perform April 24 & 25 at the Wiltern LG, in Los Angeles and April 26 at House of Blues, in Anaheim. For more information, visit www.lacunacoil.it.